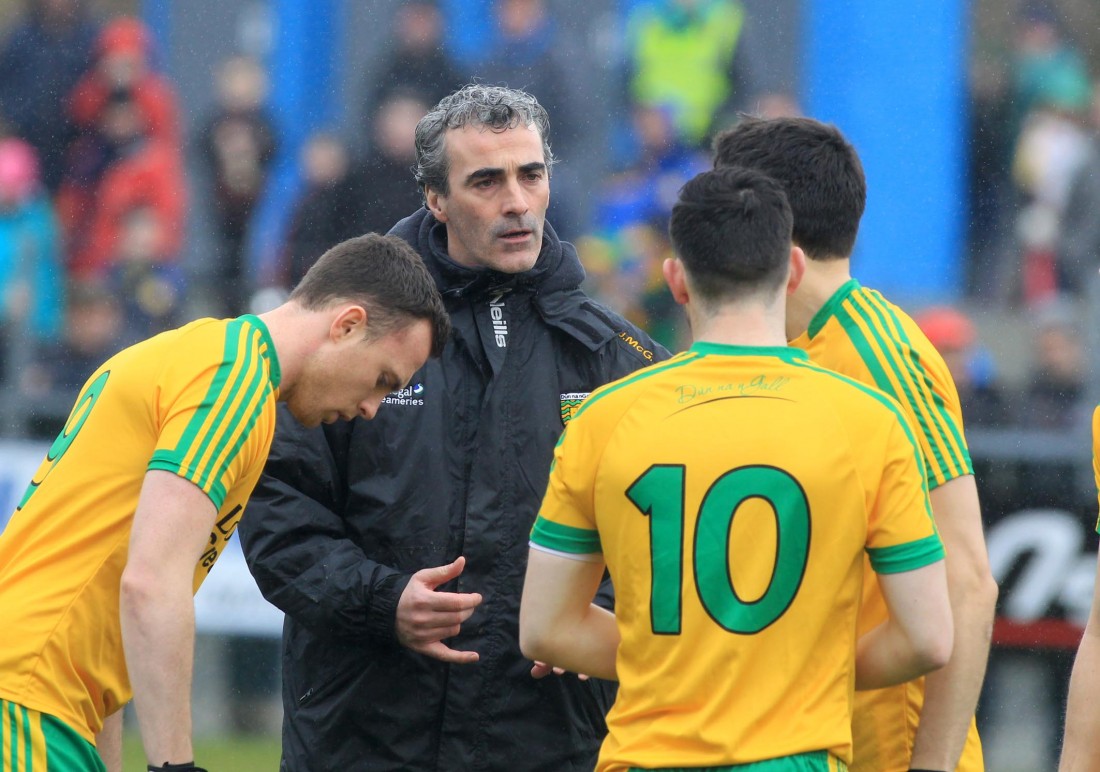 DONEGAL managed to weather a storm in both halves to defeat the Ulster Champions, Monaghan, to go back to the top of the Division 2 table.

Odhrán MacNiallais and Colm McFadden netted first-half goals as Donegal scored a 2-11 to 0-10 win.
MacNiallais was excellent and contributed 1-3 on a real coming-of-age day for the Gaoth Dobhair man as Donegal pulled clear of Monaghan to make it three wins from three outings.

An injury sustained by wing-back Frank McGlynn was not as serious as it looked and although Patrick McBrearty was said to be heading for an x-ray on a leg injury, that too appeared a precautionary measure as the player did not seem in distress as he left the ground.

McGlynn was brought off after going down awkwardly in a goal-mouth scramble late in the game.

“They say that it’s a dead leg, so it’s not a hamstring injury or anything like that, thank God.”

McBrearty, who scored two superb second-half points as he continues to push hard for inclusion from the start, completed the game, but McGuinness said afterwards: “He has a bang on his tibia and it’s very tender at the point of contact so we’re going to get him x-rayed. We’re hoping it’s not too serious, but he’s limping on it and it’s sore at the moment.”

MacNiallais found the net after seven minutes to set Donegal on the road to victory, while Dermot Molloy teed up McFadden for the second goal, which gave Donegal a firm command of things.

With Ryan McHugh again immense in another mature display it was a positive day for Donegal, who gave a League debut to Darach O’Connor during the second half.

“We’re happy with the performance; that’s the third one on the bounce now,” McGuinness said.

“We are showing decent consistency in the performance levels which is very positive. They worked hard and set the tone very early in the game and brought it through to the final kick. We played some nice, expansive football there.

“It was a good, solid performance on testing ground. We’re very happy with their attitude and what they’ve done in the first three games.”

Donegal played against the breeze in the first half, during which there was a spell where a tornado seemed to be brewing around the venue, but the returned for the second half and found themselves staring the eyeballs of the elements again.

McGuinness said: “We were playing against the breeze in the first half and it turned so we were against it in the second half as well. That made it very difficult. We done really well on our own kick-outs against the breeze in the first, but we had to contend with it again in the second. They pushed up and squeezed us more, which made it a battle.

“When we did get possession, we drove on really well. We had positivity in our play and we’re happy with 2-11 on a difficult day.”

The Monaghan panel attended Mass in St Eunan’s Cathedral before the game, but there was no divine intervention for the Farney County. Manager Malachy O’Rourke said: “When we gave them that lead it was always going to be hard to peg it back. Donegal had more urgency than us. Donegal were hungrier and we have to accept that and move on to the next day.”