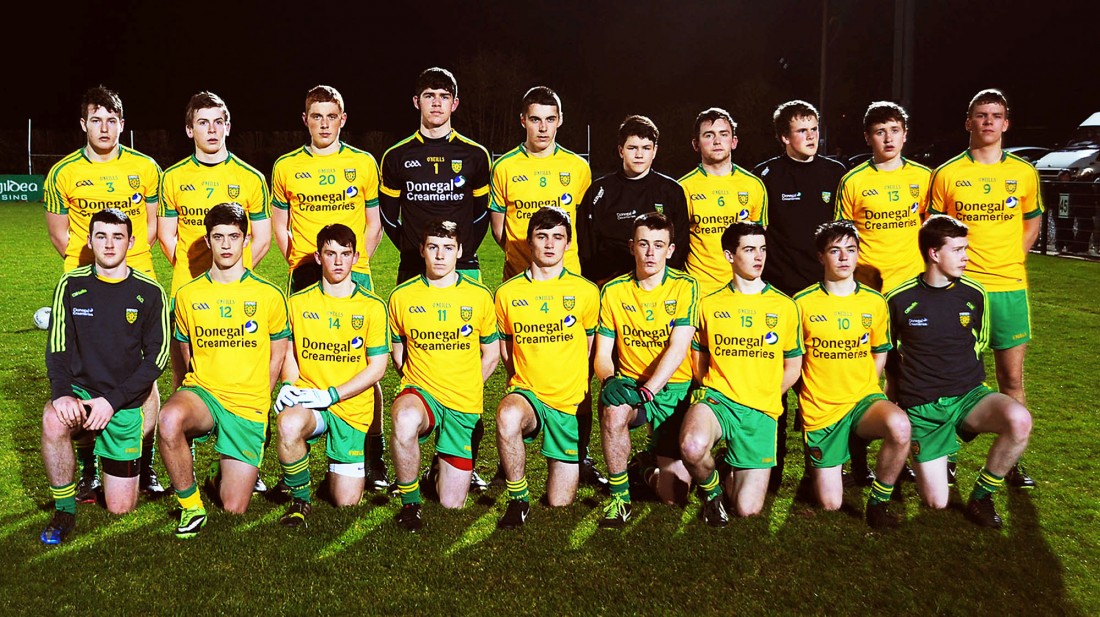 The Donegal minor squad pictured before their opening game against Fermanagh

DECLAN Bonner wants to take ‘a big scalp’ on Saturday when the Donegal minors take on Tyrone in Convoy (throw-in 12noon) in their second game of the Ulster Minor League.

Hot on the heels of an impressive opening win over Fermanagh, the Donegal young guns face an in-form Tyrone that has shot the lights out against both Antrim and Derry already. Mickey Donnelly’s team scored a combined 5-30 in those two games, although they played an under-strength Derry at Garvaghey on Saturday.

Bonner’s hand is strengthened by the availability once again of the contingent from Colaistí Inis Eoghain.
Caolan McGonagle played the last twenty minutes in the Fermanagh win and the big Buncrana man is expected to start at centrefield this time around, while defenders Danny Monagle and Tony McClenaghan are pushing hard for inclusion as his John Campbell for a spot in the front division.

Ciaran Gillespie (shoulder) and John McDyre (chest infection) are unlikely to be available for this weekend, while Bonner is also planning without the St Eunan’s College players – Conor Morrison, Connall O’Boyle, David Tyrell, Cormac Callaghan, Michael Miller and Sean Daffan – who are in All-Ireland semi-final action against St Aidan’s CBS.

“The colleges players, from St Eunan’s College, Colaiste na Carraige and Colaistí Inis Eoghain make up around fifty per cent of the panel, but the relationship between the Colleges’ managers and the minor team management has been excellent,” Bonner said.

“It’s been brilliant to see such success in Donegal. Long may it continue.”

The Donegal boss was in Garvaghey to watch Tyrone at the weekend and was impressed by the Red Hands, who had the likes of Lee Brennan and Conor McKenna on the sideline.

“We’re expecting a really tough battle from Tyrone,” he said.

“We watched them last weekend. Granted they played against a very weakened Derry team, but they were still very impressive. Tyrone just keep churning out these strong underage teams and this will be a difficult task for us. Remember, Tyrone got to the All-Ireland minor final last year and still have seven or eight of those lads to call on.”

Although he will make alterations to the side which dismantled Fermanagh on a night when Lorcan Connor, Jamie Brennan, Cian Mulligan and Eoin ‘Ban’ Gallagher shone, the Donegal boss feels that his side must take a ‘scalp’ this weekend

“It’s hard to beat a winning mentality and that has been our mantra all along,” he said.

“Taking a big scalp like Tyrone would be huge for the lads.

“Number one, we are out to win every game we play. We will make a number of changes in every game we play, but there won’t be major overhaul. What we want more than anything is to get stability, to find a settled side. Within that we’re still able to make a couple of changes and hopefully not take away any quality from the starting line-up.”

Saturday’s game had originally been pencilled in for O’Donnell Park, but has since been changed and will take place in Convoy.