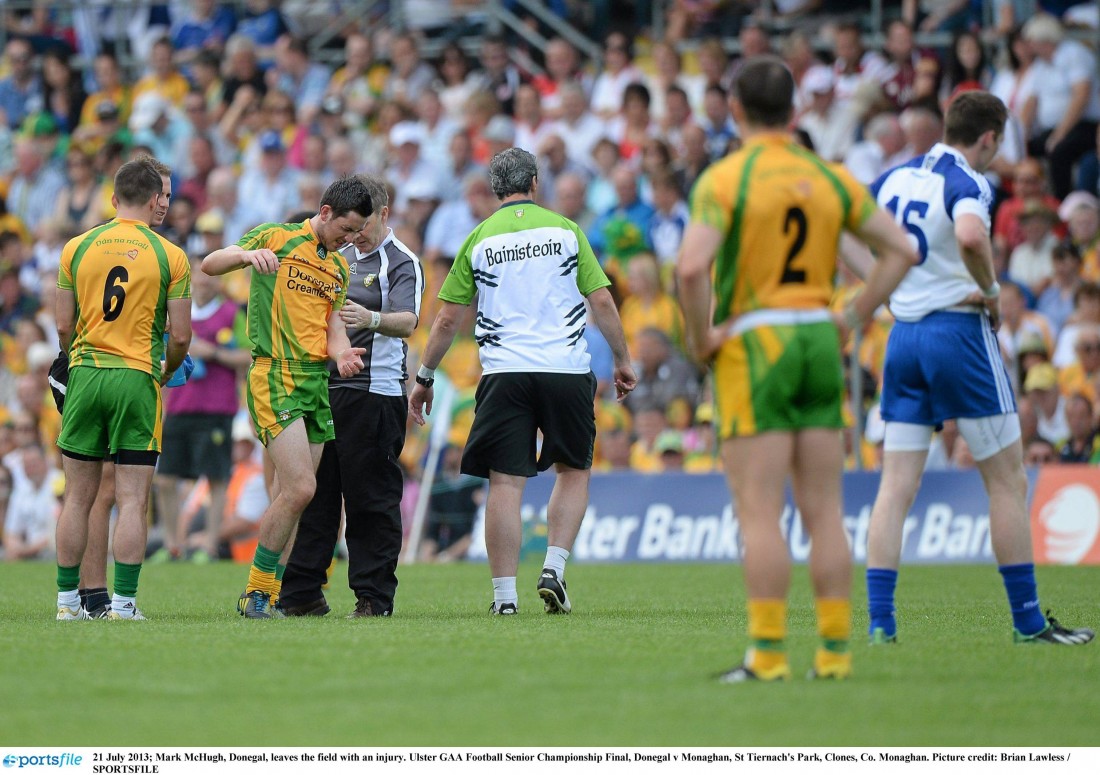 Mark McHugh is helped from the field in the early stages of last year’s Ulster final.

THERE’S something about the look of Donegal v Monaghan this week that has got the interest bubbling a good deal more than the previous games we’ve talked about in 2014.
Our memories are still fresh from that day in Clones last summer when we bid farewell to the Anglo-Celt Cup for the first time in Jim McGuinness’s tenure.
It’s a far cry from Ulster final day in Clones, but there’ll still be a fair rip of intensity on Sunday.
I know management and players always say that last year doesn’t matter, but I’d say the Ulster final will have been mentioned within the Donegal camp this week. It was a game that left a lot of hurt and, while they won’t want to say it in public, I’m sure they will have garnered a lot of inspiration from that which can help drive them on to a win this weekend.
Donegal have had a great start to the League with wins in Laois and Galway and will want to keep on that winning note this weekend.
Monaghan have never feared any Donegal in the past and they proved that in last year’s final when they stared Donegal in the eyes and took them on. Donegal don’t have a great recent record against Monaghan, either; something else the boys will be looking to put right in Letterkenny.
Two points on Sunday wouldn’t make up for the Ulster final, but what it would do is give us a great kick in towards a return to Division 1 again.
The squad is getting stronger and there is more depth to it now with the likes of Martin McElhinney and Ryan McHugh coming into the side and playing well the last day, then Christy Toye who has been excellent since returning to the team again this year.
This weekend Eamon McGee is back from suspension so there are plenty of options in the ranks again.
It would be difficult to change the team too much from the side that played in Galway, given that they have played well so far. People have questioned the level of the opposition so far, but you can only beat what’s in front of you and Donegal have been impressive. Donegal have done it very professionally and the year overall is off to a very positive start.
It is so different to last year and we remember to how it was documented about how hard it would be to come back after winning the All-Ireland. That has been shown by both last year and now how the break has treated Donegal. That said, Donegal had an awful lot of injuries and had key players missing at key stages during the season.
But they’ve looked a much more focussed outfit this year so far and are looking in fine shape.
No doubt, though, Sunday will be a much sterner test.
This will be very physical. I always remember Monaghan trying to intimidate their opponents. That was always the Monaghan way.
Sunday is an ideal opportunity for the likes of McElhinney to be put to the test. He played well in Galway and while people are saying that Neil Gallagher should be thrown in, I can see why Jim would keep the likes of McElhinney in. This is where his point about results in the League comes into play. It is much better to see what a fringe man can or cannot do rather than just go to win a match in the League.
You’ve got to plan to carry as many options as possible during the Championship and this is what you have to do.
If you were looking around at a bench with McGee, Gallagher and Patrick McBrearty on it, you’d be quite happy with your lot – and these men, of course, are still in the first XV and are tried and trusted by now in terms of knowing their quality.
McBrearty has been really impressive with NUI Maynooth and has come back in 2014 with good form. These are great options and, if Jim McGuinness can hold these boys injury free, he’ll be quite content.
This is a good place to be at this stage of the season.

THE venue for Sunday’s game has come under scrutiny, but I see no problem with the game being staged in O’Donnell Park.
It’s a huge game and people are talking about access problems. Ok, it can take a while to get in and out, but venue-wise O’Donnell Park is fantastic. The surface is excellent and for a game like this, that will have close to a full house at the ground, it is a perfect setting.
The county players love playing there and I think it’s brilliant to see games being played there.

ISN’T it great to see Donegal schools doing so well in Ulster Colleges and Ulster School’s competitions?
Two Donegal teams are in the MacLarnon Cup final as St Eunan’s College and Colaisti Inis Eoghain will meet. It’s a long time since we had an all-Donegal final and it can only be good for football in the county to have our teams doing well at provincial level.
Colaiste na Carraige have qualified for the Markey Cup final, for the first time since 1985, and their Under-14s are in a semi-final today while PCC are in the Under-16 final.
I’ve been like a broken record about this for a number of years now: Schools football is so important.
The Colaisti Inis Eoghain set-up is something I’ve been behind from day one. That has really helped football in the Inishowen peninsula.
As the Donegal minor manager, I must say this success has been very encouraging and, taking the Inishowen project as an example, I have four of their players in the Donegal minor squad. So that shows how beneficial it has been.
I’m sure I’ll have an interesting couple of weeks at minor training with the Inishowen and St Eunan’s College lads!
It’s a continued sign of the work being done in these schools and colleges – but there is also a message to other establishments here surely.
Colaiste na Carraige is one of the smallest Vocational Schools in Donegal and yet its record is just staggering. Here they are punching at Ulster level year-on-year. They are a school of only around 200 pupils, drawing players from just two clubs.
But for me, the clubs involved – Naomh Columba and Kilcar – deserve immense credit. They are clubs steeped in tradition and their shoulders have really gone to the wheel. The amount of work the likes of Neilly Byrne and Damien Carr, for example, do when the school is in action is fantastic.
It really is a lesson for everyone what can be achieved by putting hard work and structures in place.
Getting clubs involved in these school teams is so important – and it’s a two-way street too. Glen were in the doldrums for a long time, but the recent achievements of Colaiste na Carraige has come at a time when Naomh Columba has been picking up silverware at underage level. That is not coincidence.
The work has paid off for both clubs and the school.  Others really ought to take a look.
Tyrone football has benefited from their work over the years and it shows no signs of letting up, either: There are two Tyrone teams in one semi-final of the MacRory Cup – St Patrick’s, Dungannon and Omagh CBS.

CONGRATULATIONS to Aogán Ó Fearghail, the GAA President-elect, who will succeed Liam O’Neill in the GAA’s top position next year.
He will be the first Cavan man to take up the position, which seems a surprise given the standing of the GAA in that county, but his appointment should be welcomed across Ulster. Aogán was a good friend to Donegal GAA in his time with the Ulster Council and rightly received the strong backing of the Donegal County Board during the election process.
He’s the first Ulsterman to be GAA President since Seán McCague (2000-2003), who bridged the gap to Peter Quinn, who had a successful term between 1991 and 1994.
Quinn presented Sam to three Ulster counties – Down, Donegal and Derry – while McCague handed the chalice to Kieran McGeeney of Armagh in 2002.
Hopefully Ó Fearghail will get to experience something similar.