Advertisement
HomeColumnistsNo Bones About ItDeclan Bonner: Concerns that Donegal have more to do than they should
Advertisement 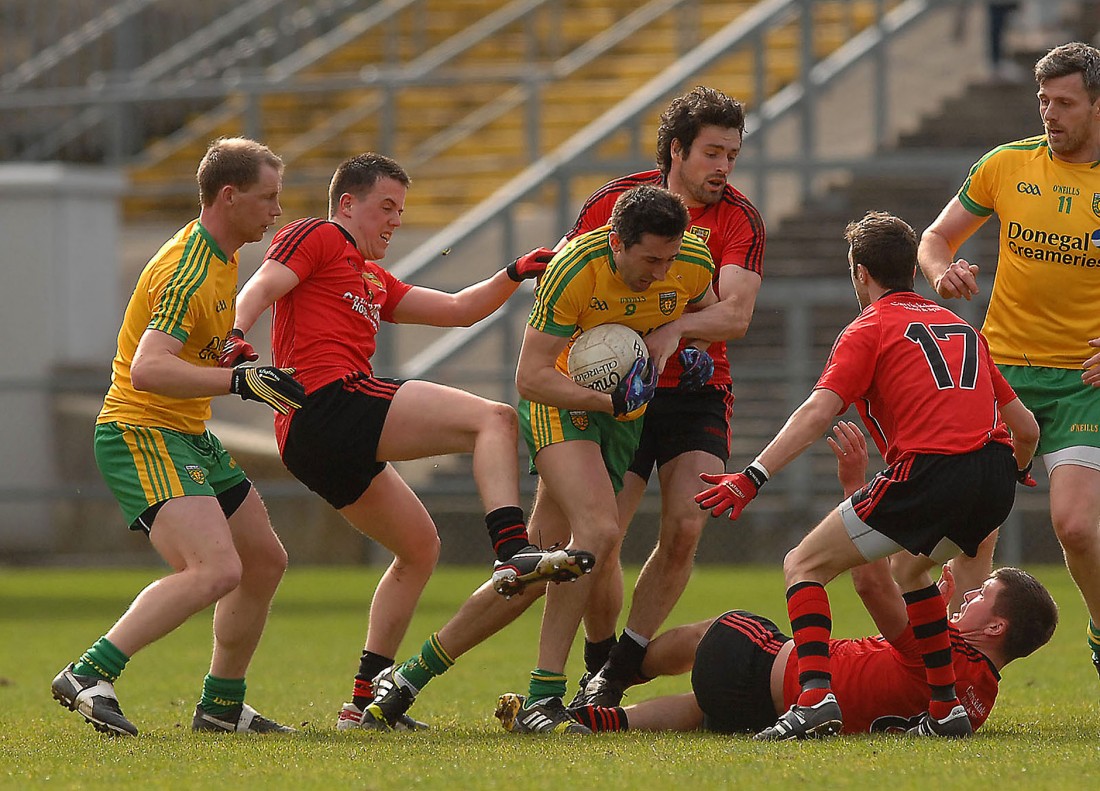 Rory Kavanagh under pressure from three Down men, in the midfield area, in the Div 2 clash in Pairc Esler, Nerwry,

SUNDAY’S game in Newry was just a follow-on from the Meath game of the previous weekend when Donegal were fortunate enough to get a draw on that occasion.

It isn’t yet a case where the alarm bells are howling, but there have been a lot of worrying signs, not least of which is the general dip in form since the opening games away to Laois and Galway.

Donegal are finding it difficult to score from open play. Over the five games, our spread of scoring from play is quite disappointing. Michael Murphy has five points, Dermot Molloy and Patrick McBrearty and outside of Colm McFadden, Odhrán MacNiallais’s 2-5 is the highest tally from play.

We’re not clinical enough at the moment.

The way the game has gone with all the mass defences, it has become very difficult. At the same time, we’ve seen a lot of high-scoring games around at the moment.

The ones that really get to me are the ones that land into the ‘keeper. That’s catastrophic because you’re just setting up an attack for the opposition really.

Jim conducts forensic analysis of games and will see what is needed. Correcting it is an entirely different matter, mind you, and the more I look at Derry, the more I get nervous about their meeting in Celtic Park.

It will be a colossal task for Donegal on May 25 because Derry are going about their business very impressively at the moment. They have been getting some magnificent displays and Mark Lynch against Dublin on Sunday was excellent throughout and they’ve been having some superb performances.

Brian McIver has them well organised, as we came to expect from his time with Donegal. Benny Herron has proved a fine find for his forward line and, make no mistake about it, Derry will be ready for the visit of Donegal. They were comfortable winners against Dublin last weekend and they should not be even remotely dismissed.

McIver is a shrewd manager and the battle between himself and McGuinness will be the biggest one of all.

Donegal have a number of problems that they haven’t addressed yet.

The kick-outs just aren’t working. Two years ago, Donegal won around 80 per cent of their own kick-outs. While we don’t have the same ball winning ability without Neil Gallagher, there is still an issue that really needs tidied up.

Our middle diamond is a problem at the moment and it will only be when that settles down that we get a true reading of where we’re at. We need to get a platform to win games – and that is obtained from that diamond and those crucial positions: centre-back, midfield and centre-forward.

Newry is never easy to go to, but once Down got their goal from Niall Madine they were comfortable and Donegal didn’t look like getting anything from the game. Down saw the game out well and weren’t really threatened by Donegal.

There is a lot of food for thought and a lot to be rectified in the coming weeks.

Louth are next up on Sunday-week and we should expect to be beating them. The objective was to get out of Division 2 and that should still be the case.

The concern, however, is that Donegal have more to do that they should.

I WAS surprised that the management saw fit to bring on Darach O’Connor with eleven minutes to go on Sunday, especially since he had two really important Championship games coming up this week: Monday’s MacLarnon Cup final with Colaistí Inis Eoghain and the Under-21 Ulster quarter-final against Fermanagh on Wednesday, a game he missed because of a hamstring injury.

He damaged a hamstring early on Monday and I was surprised, given that he has been carrying the injury, that he was togged on Sunday.

CONGRATULATIONS to St Eunan’s on winning the MacLarnon Cup. The College has a great tradition in the MacLarnon and they had a lot of good performances on Monday in the final.

They were behind the whole way, but Daire McDaid showed nerves of steel to score a late penalty to win the Cup for the fifth time. Fair play to Neil Gordon and his team. It’s great to see them go to MacRory football because that is where Donegal players need to be.

Colaistí Inis Eoghain deserve immense credit for the work they’ve been doing down there and getting to the final was a massive achievement in their first competition.

WE got the Minor League campaign off to a winning start on Tuesday against Fermanagh in Convoy. We have plenty of work to do, especially in the final third, but it was a reasonable win for us. We created a lot of goal chances, but only took one.

I would like to wish Liam Maguire a speedy recovery after he was taken to hospital having been injured during the game.

Thoughts are with him as it’s never nice to see a player getting injured like that. It was an accidental injury, but a nasty injury nevertheless and the good wishes of myself and the minor panel are with him.

A LOT of teams are finding their way and working out what their best team is. It’s interesting that once the word ‘crisis’ is mentioned within the boundaries of the Kingdom that Kerry manage to get their act together. After blowing Tyrone away they went to Kildare and won at the weekend. Crisis? What crisis?
Granted, they have a lot of weak links, but there’s that old cliche again: Write Kerry off at your peril.