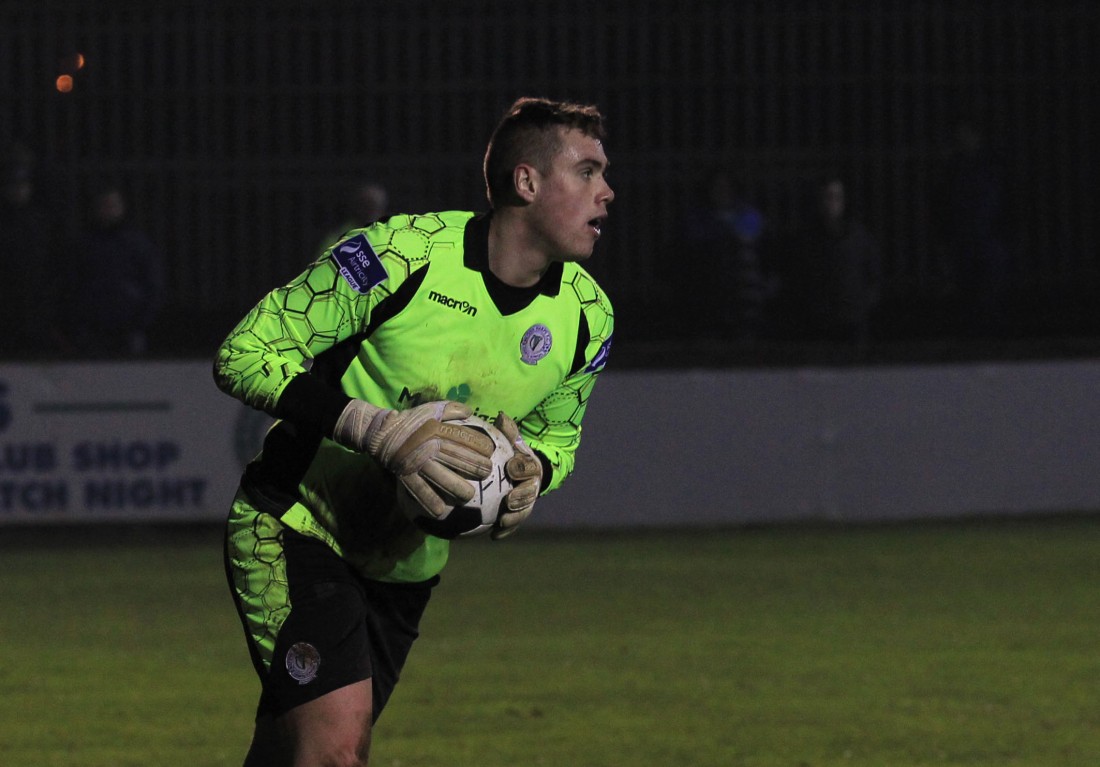 BY CHRIS MCNULTY
CONOR Winn picked the ball out of his net for the first time in four League games on Saturday night after Vinny Faherty’s delightful opener put Galway in front.
While Cockhill Celtic beat the big Finn Harps goalkeeper twice in the EA Sports League Cup, Winn had kept a clean sheet in each of the opening three games of the season.
Paul McVeigh’s 75th minute equaliser earned Harps a share of the spoils and Winn, who was on the books of Galway United, Mervue and Salthill in previously well-traveled times that also took him to Shamrock Rovers and Dundalk, was pleased to get the draw.
“Obviously I wanted to keep a clean sheet and go four in a row, the whole team did, but it was a good point to get in the end,” the 6’6″ Winn said.
“Galway are a decent team, they’re very strong. We’re happy that we pushed hard and got the goal that we deserved.
“They were physical, they were strong, they were quick. The sending off hurt them, but we dug in well.”
Winn knew many of Saturday’s opponents as former team-mates having grown up in Galway. Faherty’s opener is a goal that Winn is likely to hear about over the coming days.
The Harps ‘keeper said: “He put in the top bin. I’m sure Vinny would like to do that again. I’ve known him for a few years now. It was a great finish and he won’t let that go for a while.”
Winn arrived at Finn Park following the departure of Ciaran Gallagher to Derry City. Tommy Dunne had presented the chance to sign with Galway, but Winn is delighted that he opted to make the journey up the N17 to Donegal.
He said: “I was offered Galway at the time, but there are a lot of ‘keepers and a lot of standard down there. I need to play football. I’d seen Harps play a couple of times. I spoke to a few boys who have played for Harps and they all said it’s a great club. I know Ollie (Horgan) too. It’s a good club to be at.
“It’s been great. The people are really friendly and the backroom staff have been A1 to me. I couldn’t be happier.”
Clean sheets against Waterford United, Shamrock Rovers B and Cobh Ramblers certainly helped the bedding in process, but Winn believes that Horgan’s system – and the players involved – deserve their share of praise too.
Damien McNulty, Packie Mailey and Keith Cowan effectively play as a back three, with wing-backs James Doherty and Ciaran Coll funnelling back to tighten up when needed. It’s a system that will be hard to break down by First Division sides – and Winn wants to keep the door shut on opposition sides.
He said: “That’s one of the best back fours, back five or whatever way you want to put it, that I’ve trained with. They’re grown men, they’re solid and they want to win. They make my job a lot easier because they’re putting a shape on it.
“I couldn’t do it on my own. It’s a team effort.”
On Friday night Harps face their biggest test yet when they go to Tolka Park to play Shelbourne.
Winn said: “It’s a good chance. It might be the top two now, but that doesn’t matter. It’s another match. We have a long season ahead of us. We’ll work hard during the week and hopefully get another clean sheet again next week.”