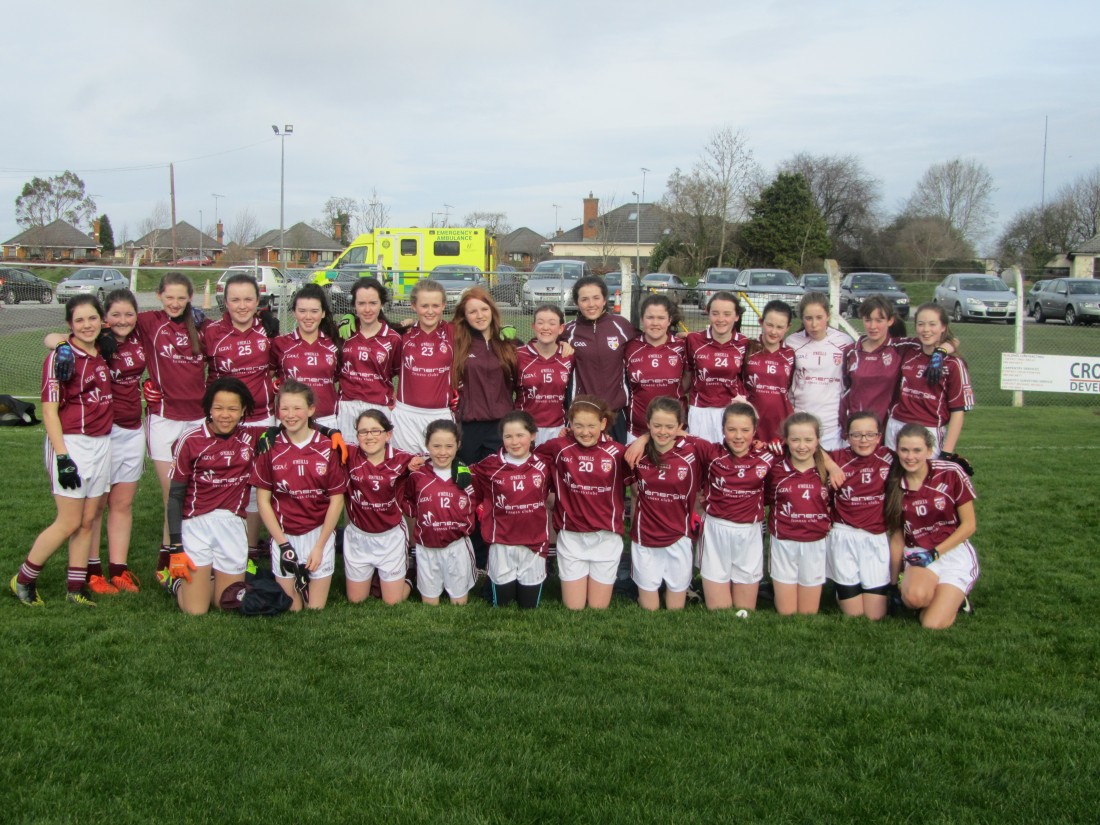 TERMON Under-14 girls represented Donegal in the Annual Royal Gaels Dunshaughlin County Meath Invitation tournament.
After the 5.30 am departure for the Burn Road girls Termon who were drawn in Group A were understandably slow to start and it was no surprise that the first game against Simonestown was in doubt until Orla Blade, Meabh McDaid, Mya Alcorn, Aoife  Stewart and Emily O’Flynn pushed the Donegal representatives over the line to register the first win for theTermon club at any level in 2014 to a score of  Termon 3-06 Simonestown 2-01
In the second game Termon ran out easy winners against Skyrne by a score of Termon 4-03 Skyrne 0-01.
In this game managers Lisa McGlynn and Paddy McMenamin, the former Donegal County minor, introduced a new midfield pairing of Eimear Alcorn and Meabh McDaid.
This new pairing combined with a solid display by the Termon rearguard ensured they had an easy victory, with Hannah McSharry, Eve Coleman and Emma Nelis to the fore to assist Shannon McLaughlin, Annie McLaughlin and Nicole McLaughlin when experience and skill was needed.
Then it was down to the final against Royal Gaels, the host club, and what a ding-dong affair it was.
Played in extremely windy conditions the Burn Road girls who were by now feeling the effects of the early departure, playing against the  gale force wind in the first half, turned over six points adrift.
In the second half Termon scored six points but the hosts scored a single  point to run out winners by one point with a final score: Termon 0-06 Royal Gaels 0-07, much to the delight of tournament organiser and former Termon player Kieran Doherty,  born in Killmacrenan but now domiciled in County Meath.
Termon was best served by Meabh Mc Daid, Andrea Murray and Emily O’Flynn.
Others to shine during the weekend were Jill McGettigan, Ann Marie Doherty, Rhionna Giles, Mollie Page, Ciara McIlwaine, Niamh McBride, Sinead McGettigan, Mellisa O’Toole and Mollie Gallagher.
Much of the discussion on the return journey back to Donegal centred on the 2015 tournament with early bedtimes and loads of training promised by all concerned!
Termon panel: Meabh McDaid, Hannah McSharry, Shannon McLaughlin, Annie McLaughlin, Nicole McLaughlin, Mia Alcorn, Eimear Alcorn, Lauren Gallagher, Orla Blade, Andrea Murray, Aoife Steward, Jill McGettigan, Ann Marie Doherty, Emily O’Flynn, Rhionna Giles, Mollie Page, Ciara McIlwaine, Niamh McBride, Sinead McGettigan, Mellisa O’Toole, Mollie Gallagher, Aiobhinn Gallagher, Emma Nelis, Hannagh Downey and Daria McGlynn.