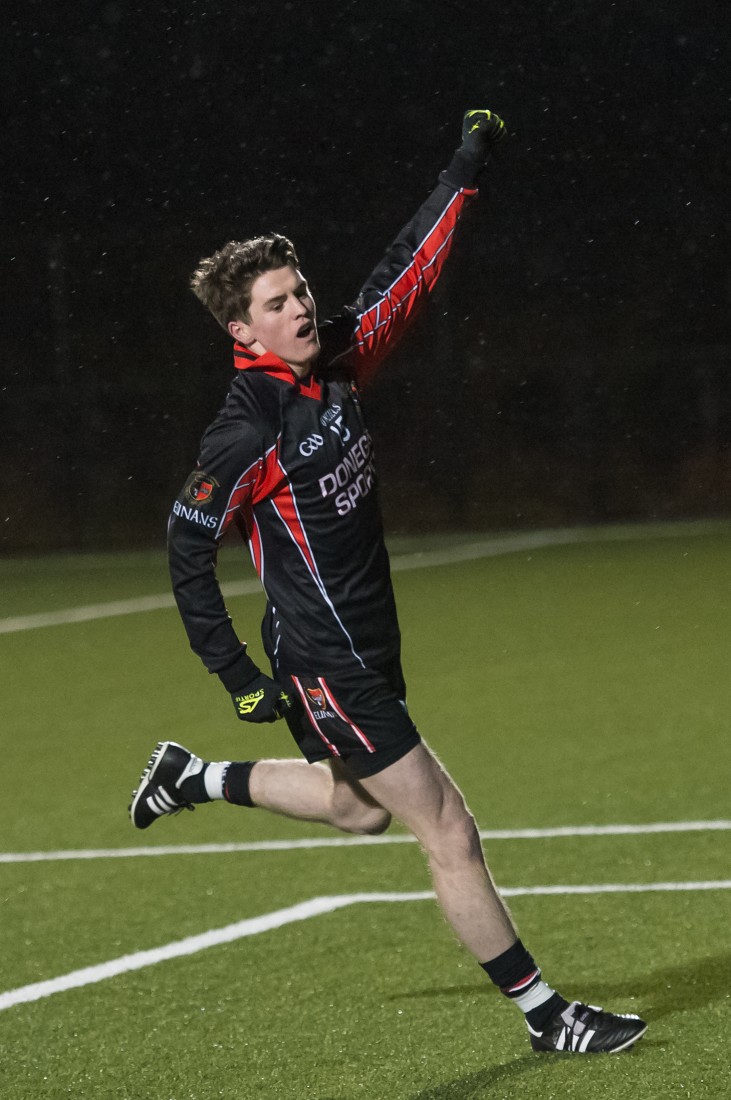 BY RYAN FERRY IN GARVAGHEY

ST EUNAN’S college are through to the 2014 MacLarnon Cup final, after a brilliant first-half paved the way to comfortable semi-final victory over St Malachy’s, Belfast at the Tyrone Centre of excellence, Garvaghey on Wednesday night.

The Letterkenny side played against a strong wind in the opening thirty minutes, but it did not hamper their play and goals from David Tyrrell and Daire McDaid helped them to an eleven point lead at half-time.

Eunan’s were poor in front of the posts in the second half, but St Malachy’s were lacklustre and they failed to register one score in the second period.

McDaid notched his second goal with seventeen minutes remaining, and Rory Carr added a late three-pointer as Eunan’s cantered into the decider.

St Eunan’s battled through their quarter-final with St Columb’s, Derry by two points, and their manager Neil Gordon asked his team for an improved performance on Wednesday.

He certainly got that, and his side looked sharp right from the throw-in. McDaid opened the scoring after four minutes with a left-footed point, and Hume doubled their lead with a free.

McDaid grabbed his second point of the evening in the 9th minute, before Seamus McGarry scored Malachy’s opening point with a sweet left-footed effort.

McDaid was causing havoc for the Belfast men and in the 10th minute he set up the first goal.

The Termon sharpshooter raced clear of Martin Murphy, and after losing control of the ball he still had the presence of mind to pass soccer-style across the goal to Tyrrell, who kicked the ball to the net.

Hume added another free to Eunan’s tally to put them in a commanding six-point lead after 14 minutes.

McGarry replied with a fine score after good play from Rory Scott, but Niall O’Donnell extended Eunan’s lead out to six again, when he burst through the middle and tapped over the bar.

Ben Rice and Hume (free) exchanges scores, before Gordon’s team netted for the second time in the 21st minute.

Peter Healy was dispossessed by Daniel Clarke and the Naomh Colmcille player launched a great pass to the unmarked McDaid, who drove the ball past Chris Lorty.

Hume added a point after a good turn, before McGarry registered his third point of the evening after 26 minutes.

Tyrrell pointed from an acute angle, but Odhran Eastwood scored the last point of the half after racing clear from Sean McDonagh.

St Malachy’s needed a huge second half to claw back St Eunan’s lead, but the Letterkenny team were focussed and McDaid and Niall O’Donnell tagged on quickfire points.

The Belfast side struggled to find their range and dropped a number of balls into Shaun Patton’s hands in the second-half.

Eunan’s scored their third goal after 43 minutes, when Conall O’Boyle won possession off Scott, and hammered it as hard as he could down the pitch.

The ball took a big bounce on the 4G pitch, deceiving and dropped into the hands of McDaid, who fired low to the net.

With the game over as a contest Gordon’s men took their foot off the gas, and their shot selection as poor at times in the second half.

However, they did grab a fourth goal five minutes before the end of the match, when Cormac Callaghan was quick onto loose possession and he fed substitute Rory Carr, who hammered the ball high into the net.

St Eunan’s closed out the game with ease, but they will know that they will face a much sterner test against Coláistí Inis Eoghain in the MacLarnon Cup final.