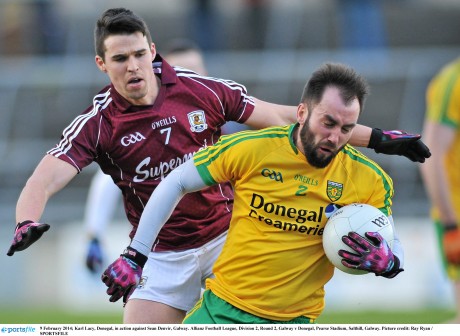 BY CHRIS MCNULTY AT PEARSE STADIUM

DONEGAL went clear at the top of Division 2 thanks to another comprehensive win, as Jim McGuinness’s side had seven points to spare on Galway at Pearse Stadium.

Colm McFadden’s 14th-minute goal set them on their way to a victory that puts marginal breathing space between them and their Ulster counterparts of Monaghan and Down who are next in line.

Donegal could never really manage to pull away from Galway in the manner of their thirteen-point hammering of Laois last weekend but, neverthless, the end result was never really threatened here.

Galway’s was a blunt sword for long periods, bar a couple of spurts of scoring in each half and Donegal held the controls from McFadden’s goal, a strike that polished off an excellent team move.

It was an afternoon of encouragement by the Corrib, with Ryan McHugh outstanding and Martin McElhinney turning in one of his best displays in the county shirt. Patrick McBrearty hit three points in a lively appearance of the bench while Neil Gallagher returned to action, playing the second half.

Galway were rocked when full-back Finian Hanley left the field injured very early in the day and there will be a worry as to his immediate participation as he was helped from the field.

There had been considerable doubt as to the playing conditions, but Pearse Stadium was given the go-ahead following a dawn pitch inspection after Tuam had been placed on stand-by on Saturday evening.

McFadden tucked over Donegal’s opening point in the fourth minute after good work by Rory Kavanagh, but it was Galway who were soon ahead with quick-fire points from Michael Martin and Gary Sice, who landed an excellent score from 40 metres.

Murphy leveled in the 10th minute with a magnificent point from out the right after Lacey picked up the pieces when the unfortunate Hanley lost possession.

His afternoon ended as he was helped from the field having gone down in considerable distress as he found his foot entangled in the turf.

Four minutes later, Donegal bagged the opening goal of the day, surging forward in style from one of the countless turnovers forced by their industrious rearguard.

Ryan McHugh, Frank McGlynn, Neil McGee, Christy Toye and Rory Kavanagh were all involved in a flowing Tir Chonaill move that ended with McFadden hammering low to the net after taking a pass from Dermot Molloy.

It was a superb exchange of swift, short passes that opened the door, McFadden firing past Manus Breathnach after a 14-pass move by his side.

Paul Varley and Paul Conroy slotted over for the hosts either end of a Dermot Molloy point, another that came out of a fast-moving Donegal attack for one of the scores of the day.

For the last 13 minutes of the half, Galway were scoreless, with Donegal going into the changeover five ahead, 1-6 to 0-4.

McFadden arched over a free and when Rory Kavanagh was hauled down by Johnny Duane the St Michael’s man was afford another chance, one which he duly converted.

In added-time Donegal might have had another couple of goals. Molloy had to make do with a point when a clever, over-the-top pass from Ryan McHugh created an opening. Off his right foot, the angle was awkward for the Glenties man, however.

Galway exhaled in relief, then, when an audacious McFadden chip trailed inches wide of the left-hand post after Breathnach powered from his goal to get a touch to the loose ball ahead of the unmarked Murphy.

Ryan McHugh knocked over early in the second half and the subsequent two minutes yielded three points for the Tribesmen, Eoin Concannon with two and Gary Sice with another.

It was as good as it got and they quickly found themselves marooned, with Donegal hitting four of the next five points.

Murphy hit a long-range beauty and followed it up with a 40-metre free. After Odhrán MacNiallais got in on the act, Murphy delightfully sailed over a free, taken off the ground 30 metres from goal, close to the sideline.

Patrick McBrearty was sprung and the Kilcar man gave a new injection to the Donegal attack. Galway’s was a damaged limitation exercise by now, although Paul Conroy did manage to raise the cheers of the home followers who oft-times seemed to be outnumbered by those in green and gold.

McBrearty and McFadden (free) pushed Donegal’s lead back out to six points again.

McBrearty was proving to be a real handful and he added his second soon after. Lacey forced a turnover and Neil Gallagher, introduced at half-time, found McBrearty with a long punt. After holding off his man, McBrearty whipped over a neat effort.

Sean Armstrong wasn’t having much involvement, but a close-range free five minutes from the end pulled Galway to within five.

Donegal closed strongly, McBrearty swinging over before sub Declan Walsh got in on the act as the seventh player to get on the scoresheet with his side’s last point.

The result was a formality by then. McGuinness heads into the three-week hiatus with his team sitting pretty at the top. Alan Mulholland, meanwhile, will possibly welcome the break, too, given that his side are Division Two’s bottom team.

With Donegal still to welcome Paddy McGrath, Eamon McGee, David Walsh and Darach O’Connor into the ranks, there is much about which to be pleased with the evenings gradually growing in length.