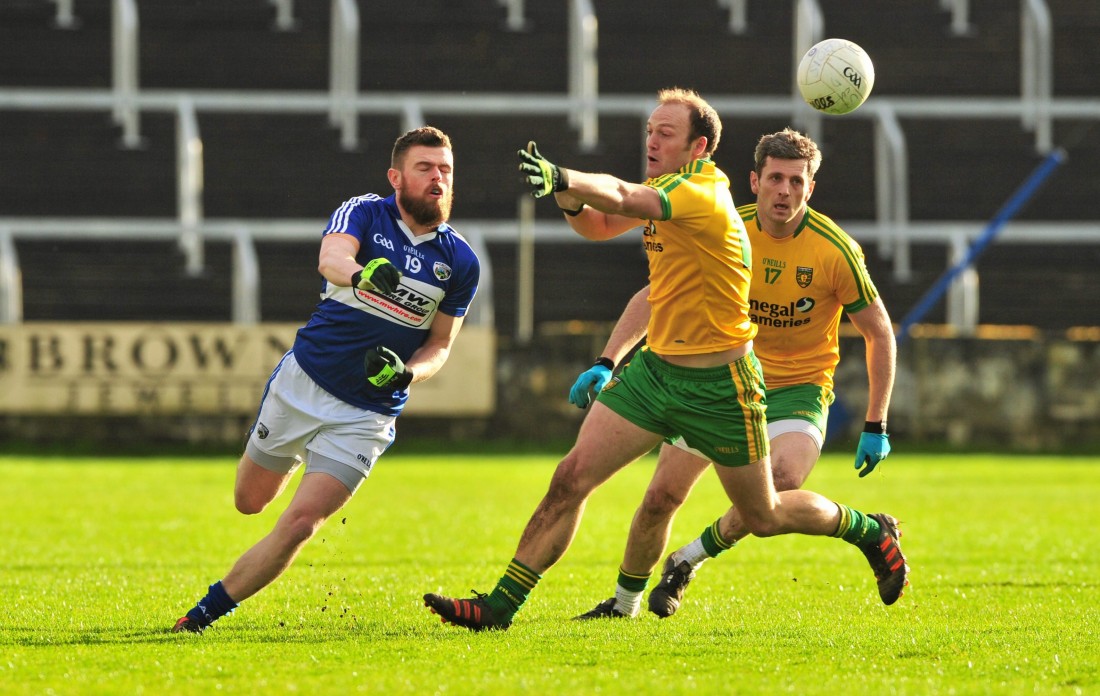 DONEGAL made an emphatic statement of their Division 2 credentials as they steamrolled Laois on what was surely an excruciating first day at the League office for the new O’Moore boss, Tomas Ó Flatharta.

Goals from Odhrán MacNiallais and Colm McFadden in either half steered Jim McGuinness’s team to an impressive win, on a day when the visitors had ten different scorers on the board.

The game was noteworthy for the useful first League start of MacNiallais and the fine contribution of debutant Hugh McFadden – who hit two points off the bench – but perhaps even more so for the shift of Christy Toye.

A hamstring injury to Buncrana teenager Darach O’Connor opened the door for Toye to come in for his first National League start since March 2012 – and the St Michael’s man was heavily involved as Donegal took charge.

A McKenna Cup appearance against Queen’s last month had been Toye’s only involvement in the green and gold since he came on in the 2012 All-Ireland final, but the experienced forward had the cobwebs swiftly wiped here.

When his card was punched in the 53rd minute, he had played a central role in 1-8 of the Donegal total, which read 2-11 as he headed down the tunnel, in the company of team surgeon Kevin Moran, after sustaining a nasty facial cut.

Toye was involved in some capacity in all of Donegal’s first-half scores and it was a demonstration, perhaps, of the impact made the absence last year of a player who had made stellar impacts upon his introduction the previous summer.

Donegal kept Laois, who were every bit as insipid as Donegal had been inspired, scoreless for a 38-minute spell from the 24th minute of the game.

By the time the famine was ended by Ross Munnelly, Ó Flatharta’s League debut had become an ordeal, with the red card to corner-back Denis Booth in the 43rd minute for a dangerous, high challenge on Mark McHugh adding further woe.

On this evidence, it would not be totally wide of the mark to suggest that there won’t be many teams of a lesser quality this spring. That said, it was certainly an encouraging Donegal display, and they displayed good levels on the gauge even when it evolved into a one-way shoot-out in the second half.

Any hopes Laois might’ve had went up in smoke 70 seconds into the second half. Leo McLoone made the ball, galloping forward with the ball at his toe. The Glenties man, soccer-style, off-loaded to McFadden, who smashed a stunning strike beyond the reach of Graham Brody.

Donegal already had a four-point lead by then, thanks largely to MacNiallais’ goal in the twelfth minute. Toye and Murphy were involved at the outset, but the lead role was played by Anthony Thompson, whose unselfishness presented the chance to MacNiallais.

That came at a point where Laois led, Donal Kingston and Evan O’Carroll scoring after an opening-minute free from Michael Murphy.

O’Carroll might have raised the green flag after latching onto Kingston’s ball over the top. Neil McGee contested that he was being held, but O’Carroll was allowed continue, only for Ryan McHugh’s intervention to block the path and the big full-forward had to settle for a point.

Scores were swapped thick and fast over the next ten minutes as Munnelly, twice, and midfielder John O’Loughlin responded after points off the boots of Molloy, Anthony Thompson and Toye, who curled over following a surge forward by Frank McGlynn.

Donegal finished the half well. Murphy nonchalantly sailed over a ’45 after Frank McGlynn had been denied by a strong save from goalkeeper Graham Brody before Toye teed up the Donegal skipper for his third of the day soon after and Donegal headed for the changing rooms nursing a four-point lead, 1-6 to 0-5.

Donegal expended a great deal of energy during that opening 35 minutes and their margin might have been greater with a little more ruthlessness.

Colm McFadden saw an effort blocked by Denis Booth late in a half that will have been encouraging for McGuinness, his side having inflicted several warning shots in getting around the back of the hosts’ rearguard.

When McFadden slammed high to the net upon the resumption, it was curtains for Laois.

McFadden, Murphy, MacNiallais and Patrick McBrearty, from long-range, kept the scoreboard ticking before sub Hugh McFadden announced his arrival with an excellent score from distance.

The Killybegs man added another and with Mark McHugh and Martin McElhinney – who hit two points inside thirty seconds – on target it meant that the 65th minute goal by O’Loughlin was little more than a footnote in the tale.