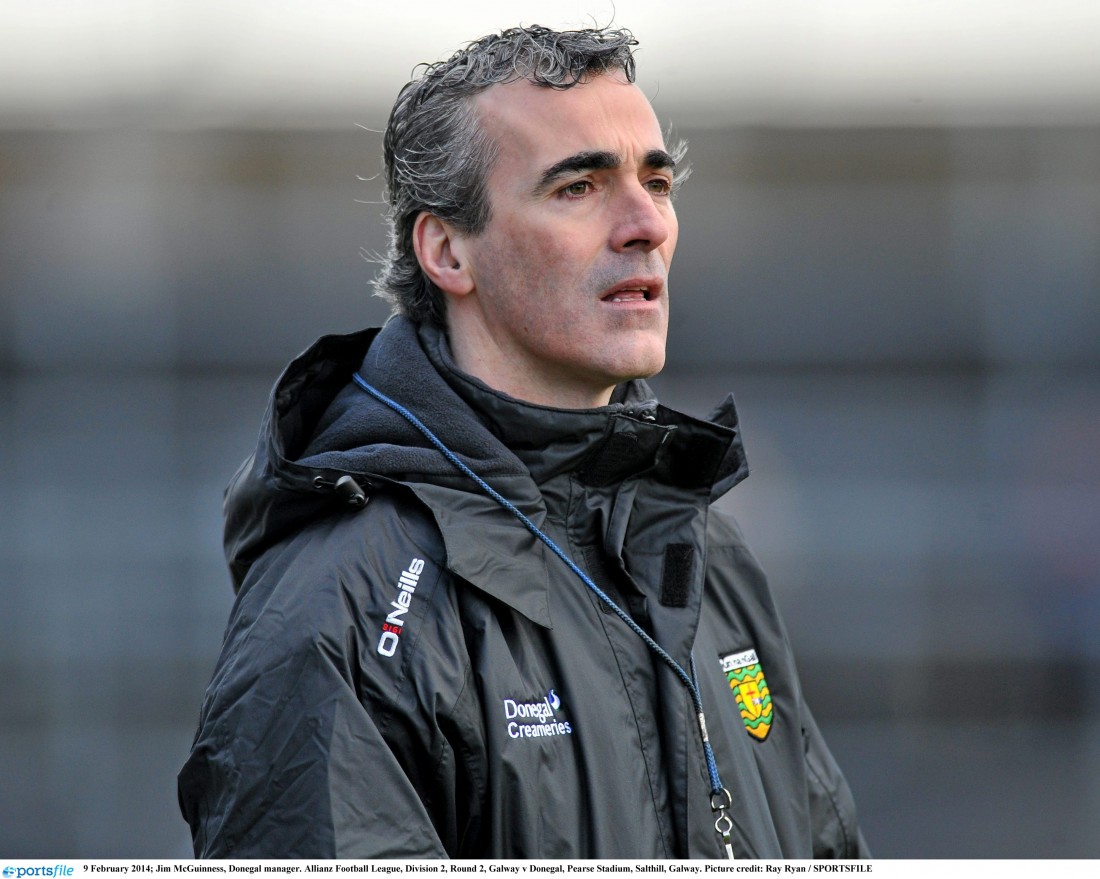 BY CHRIS MCNULTY AT PEARSE STADIUM

A SECOND big away win of the campaign drew plenty of positives for Jim McGuinness to chew upon over the next three weeks as the National League goes into a break before the temperature rises in March.

Donegal return to action when they lock horns with Monaghan in Letterkenny at the beginning of next month and the Donegal boss is hoping that his side doesn’t suffer any ill effects of participation by players in either the Sigerson Cup or the Inter-Provincials, a tournament for which he’ll have a number of candidates.

A week on from a facile win over Laois was a win over Galway that was not quite as emphatic but ever bit as comfortable. Galway’s stock as declined, although Alan Mulholland is operating without key players at the moment, but with the Tribesmen rooted to the foot of Division 2 there is more than a little angst in the air around Salthill.

McGuinness couldn’t have asked for better, his side having posted two wins from two tricky away ties, with a cumulative winning margin of twenty points.

“It was a good day for us,” McGuinness assessed.

“We sowed the seeds for it in the first half. The boys fatigued fairly heavily in the second half and it was a tough encounter then. They dug in really well and kept pushing on.

“We had some very good passages of play in terms of support. Our natural game in Donegal, in terms of playing in windy conditions, is a running game and trying to support the ball – we were comfortable with that again.

“We wanted to push on in the second half but Galway came out very tough after half-time and took the game to us.

“We got a lot of turnovers in the first half and were getting a lot of contact in tackles. They were there in the second half but we weren’t getting them. Their legs were heavy, but that’s natural enough at this time of the year.”

The Donegal selection has been a pick ‘n’ mix of all-sorts, with a considerably strong backbone. Division 2 has enabled McGuinness to let some youngsters dip their toes into the waters of senior football and the Glenties man will give more a run in the coming weeks.

The big winner so far in 2014 has been Odhrán MacNiallais. A fringe member of the squad in 2013, the 21-year old Gaoth Dobhair man’s transition into the starting XV has been seamless.

In Galway, his was again an involved display that was singled out by his manager.

McGuinness said: “Odhrán has been really great, he’s been top-class in terms of his link play and what he has contributed to attacks. He is good on the ball and he supports the ball well. He has been a big plus for us.

“We have tried to do that, to give young lads a chance to cut their teeth in the League.

“It has worked well and over the four years we have got at least one young player for the team each year for the team.”

Neil Gallagher’s return to competitive action yesterday was to be welcomed and by the time Monaghan visit Letterkenny McGuinness hopes to have David Walsh and Darach O’Connor, both hamstrung at present, back in harness.

He said: “You want to win every game and we want to marry that with men coming back.

“We said that if we could get points at all away from home that it would be a good start. We have to use the next three weeks now to build a wee bit of fitness for the Monaghan game. That’s a very big game and it’s a good game to get us focussed over the next three weeks.”

With four games in March, three of them at home to Monaghan, Meath and Louth, Donegal will be aiming to keep hitting the high notes.

For McGuinness, the pointer is trained to a more specific dot on the chart – May 25.

The Donegal boss said: “Again we will be going out to win those games and try to expose boys to football again.

“The big thing that we want out of the League is to have a squad that will compete in the Championship.

“To do that, we have to get lads integrated and expose the younger lads to the League. We will keep rotating players in and out. Hopefully by the time we go to Armagh in April everyone will be up to a decent level.

“We’ve got another victory and another good, competitive game under the belt. I felt during the week that they were sharper than the previous week and we hope that they’ll keep building now.

“We’re happy where we are at the moment, but we need to push on and, over these three weeks, look at what has gone on in these two games to see what we need to do to move the thing forward.”

Donegal hit another impressive score yesterday, 1-16 to go aside the 2-19 from Laois.

McGuinness’s team were one of those scrutinised heavily in recent years for their style of play and it had been said that the introduction of the black card would be to their disadvantage.

If anything, the opposite has been true. Donegal have had just two black cards in their five games – none of them in the League – and their efficient attack can really benefit from defensive uncertainty.

“These are positive moves for the game,” McGuinness observed on the new rules.

“It is opening up the games and there is no cynical fouling going on. It’s making it a different type of game.

“I think it’s tough on defenders at the minute. Defenders are very weary. Before, you could have taken one for the team, but now the individual has to go off. You could be training for six months for a Championship match, step in front of someone and your Championship game could be over. It’s a different dynamic.”