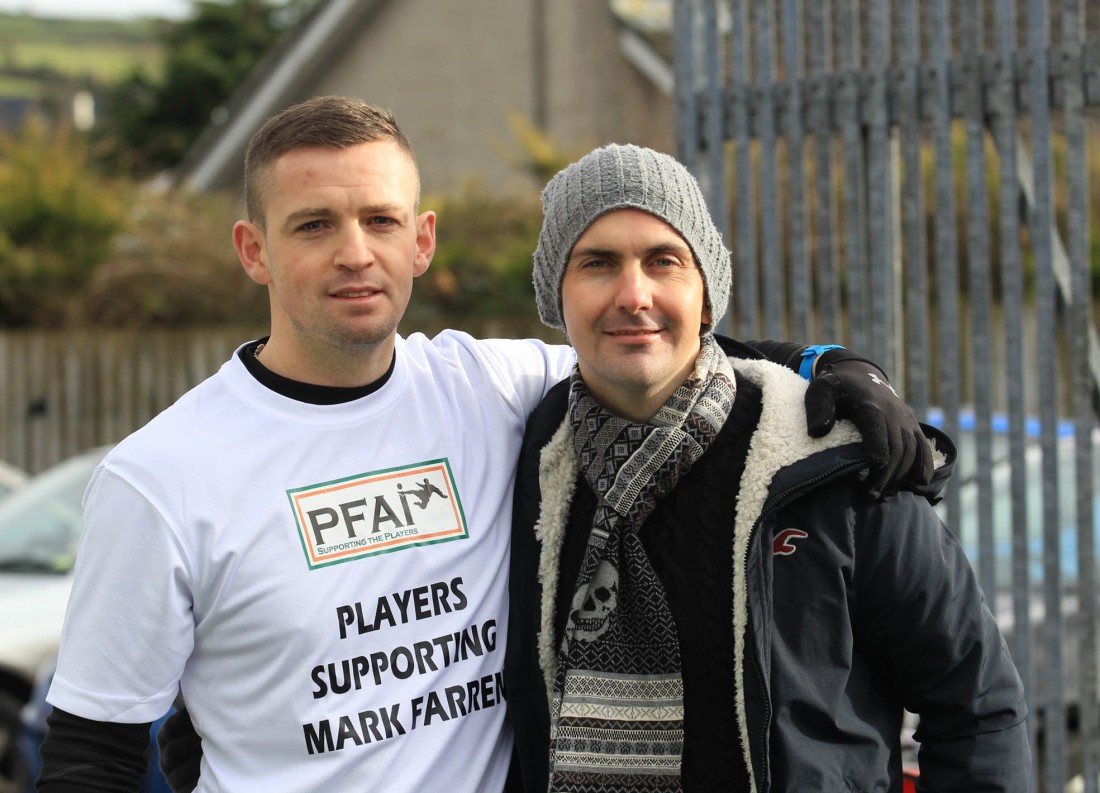 BY CHRIS MCNULTY IN KILLEA
PHOTOS BY DONNA El ASSAAD

MARK Farren says the support he received this morning at a fund-raising 5k in Killea will give him added strength in his battle with a brain tumor.

The 31-year old has to undergo another week of radiotherapy treatment at Belfast City Hospital and the 31-year old Greencastle native was clearly touched by the groundswell of support that have rowed in behind the legendary Derry City striker.

Farren, on the books of Glenavon FC, has been forced to retire from the game again as he battles an illness he thought he’d beaten when he returned to action to become Derry City’s record goalscorer in 2012.

And Farren, emotional as he addressed the packed hall at Killea FC, said his mental resolve grew this morning at the site of those who braved the cool conditions around the hilly climbs of the border village.

“The last week has been tough,” he said.

“The first three or four were ok, but the last week has been very tough. Thank you to everyone who came out to support today – this will give me the encouragement to push on now.”

Most of the Finn Harps squad took part in this morning’s event, won by 24/7 athlete Michael Black in a time of 16 minutes, 35 seconds.

Among those who competed were Farren’s former team-mates Eddie McCallion, Kevin Deery, Ruairi Higgins and Ciaran Martyn. Ex-Derry stalwart Sean Hargan was also in attendance, and among the entrants were former Derry assistant manager Paul Hegarty, as well as the Dundalk manager Stephen Kenny, who managed Farren at Derry.

that he carries himself is absolutely terrific.”

PFAI General Secretary Stephen McGuinness and Player Executive Ollie Cahill attended and presented Farren with a donation from the Drogheda United player Gary O’Neill, who has returned as a player for the County Louth side having battled testicular cancer last season.

“Mark has made such a contribution to Irish football,” McGuinness said.

“We made a significant contribution from Gary O’Neill. He decided to donate some money through us to Mark. Hopefully that will help Mark.

“It is important for us to show support to Mark. The football community has really come together.”

While there was a good sprinkling of Derry City fans in attendance, there was disappointment expressed that the Brandywell club had arranged a friendly against Cliftonville for this afternoon. 2013 Derry captain Kevin Derry ran the race while City midfielder Barry Molloy was at the start of the event. 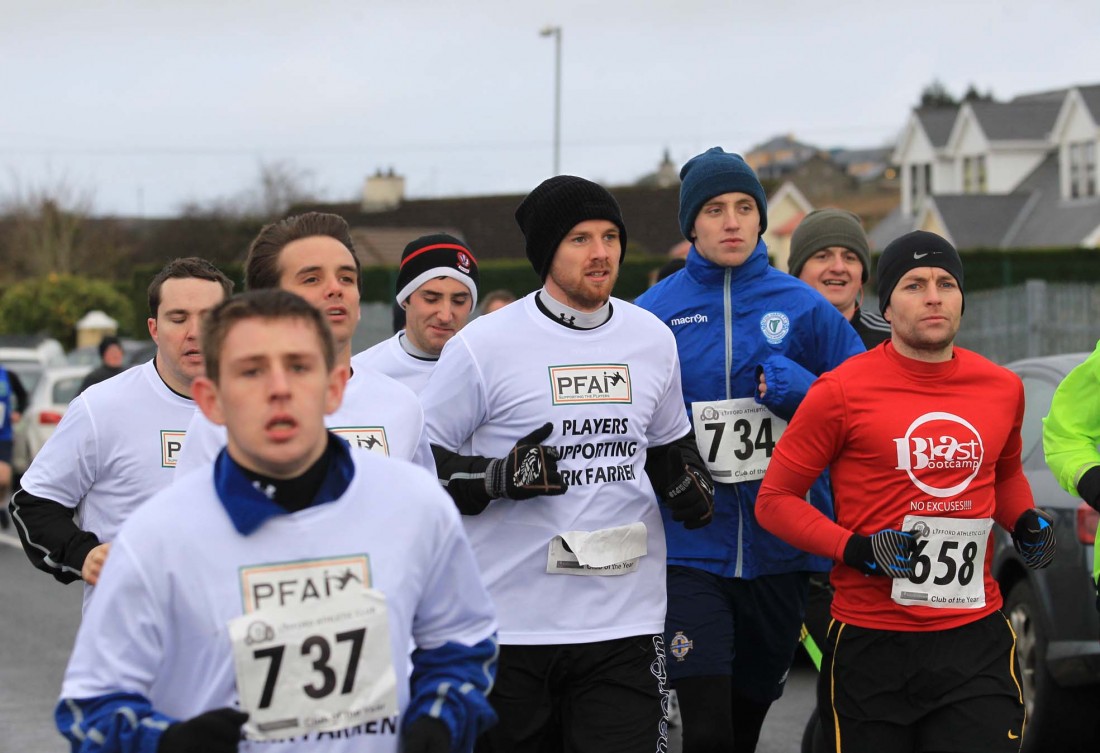 A section of the large crowd who ran the Mark Farren 5k, including Finn Harps players.

McGuinness said: “It was disappointing that Derry City had something else on today, but that’s their decision.”

Donations from St Patrick’s Athletic and Dundalk were among those presented, while McHugh received a donation from Cork City last week.

BBC Radio Foyle’s Ritchie Kelly acted as MC for the presentations and McHugh those who ensured the event ran smoothly.

“There was a gale blowing out there, but it didn’t effect the turnout at all,” he said.

“It was a brilliant event and thanks to everyone who came out to show their support.”

McHugh thanked the sponsors Kernan’s Eurospar, Micheál Doherty, Sonia Duddy and Charles Kelly, as well as Paul Duddy, the former League of Ireland referee from St Johnston who aided with logistics and organising of the event and his colleagues in the Referees’ Association, while he paid tribute to Brendan O’Donnell and the team from Lifford AC.

Black took victory in a time of 16:35 with Daniel Quigley of Trident Coaching in second (17:35) and Reach Running Club’s Kyle Doherty coming home in third (17:48). First female was Anna Forbes, first juvenile was Sean McClenaghan (Moville GAA) and the award for the first footballer home was shared by Finn Harps midfielders Thomas Bonnar and Pat McCann. 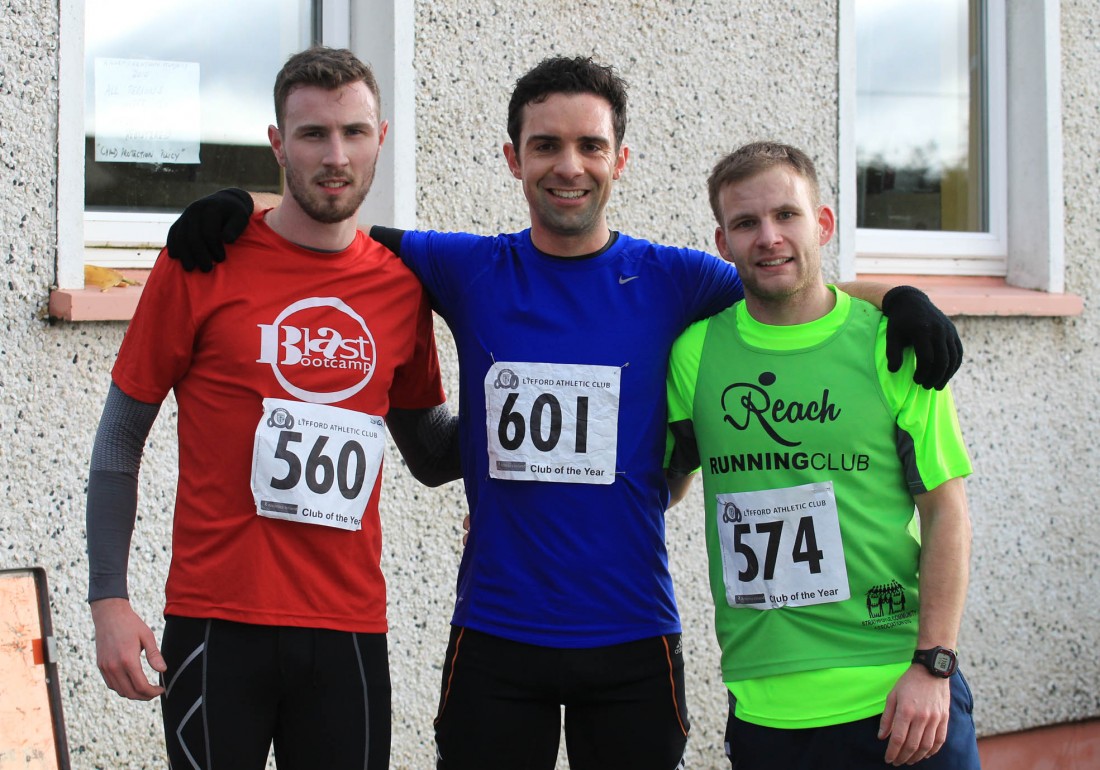