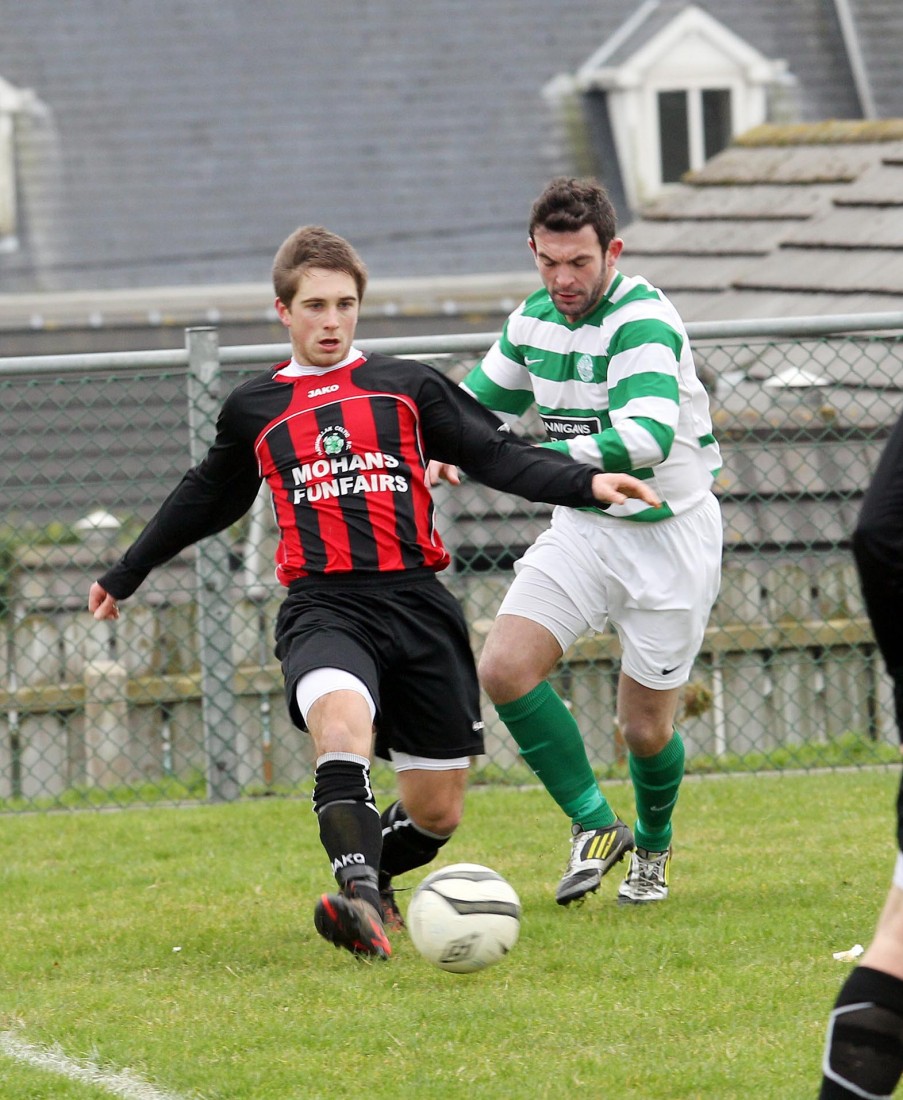 Oisin McMenamin has signed for Letterkenny Rovers and will face former club Finn Harps this weekend.

BY RYAN FERRY
After a false start last weekend, Letterkenny Rovers and Finn Harps will get their respective seasons underway this Sunday when they take on each other in the Knockalla Caravans Cup at the Aura Centre at 1pm.
The sides were due to play last weekend in the Donegal News League Cup, but the game was postponed due to the adverse weather.
Harps were drawn to meet Rovers at home this Sunday in the Knockalla Cup, but with Finn Park deemed unplayable, the game has been reversed to Letterkenny, while the start time has also been adjusted – it will now kick-off at 1pm.
Letterkenny Rovers have been very active over the close season as they attempt to improve on an underwhelming 2013. They had a disappointing year, finishing third in the Ulster Senior league – 18 points adrift of league winners Cockhill Celtic.
Rovers manager Trevor Scanlon has shown his intent for the season ahead by strengthening his squad with a number of experienced players joining the club.
Stephen O’Donnell, Aaron O’Hagan, and Matt Harkin have signed for Rovers after playing with Finn Harps last season, while Oisin McMenamin, Neil Lloyd, Christopher Sweeney, Darren ‘Kenny’ Doran and Barry O’Donnell will also play with the Letterkenny side this season.
“We’ve brought in a couple of players alright and there’s been a bit of talk about it, but we’re not the only team to have signed players,” said Scanlon.
“I felt last year we lacked experience and we had a relatively young squad. I was happy to give the younger lads a chance, but when the big games came around they were under a lot of pressure,” added the Sligo native.
With so many new recruits on board, it might take time for Scanlon to gel his team together. His cause has been hindered by a lack of pre-season friendlies.
“At the start, it might take time to get used to each other. We haven’t been helped by the weather and we have only managed to play one friendly. It’s been a topsy-turvy pre-season, but it’s been the same for everyone.”
“The lads are working hard in training and they’re hoping to hit the ground running this Sunday.”
Rovers will face a youthful Harps team this week, and Scanlon will have some insight into his opponents with his son, Aaron, on Harps’ books.
“They have a good core of players from their under 19s and their league has just finished so they should be fresh enough.
“We might have more experience, but they are the best players in their age-group in the county. They have no shortage of energy and pace, and they will ask plenty of questions of us,” said Scanlon.
Rovers have been tipped in some quarters to win the USL this year, but Scanlon believes they will need a significant improvement if they are to challenge last season’s top two, Cockhill Celtic and Drumkeen United.
“It’s always our aim to win the league, but we are going to have to go up a few levels from last year. Drumkeen have brought in a lot of players and will be up there again, and Cockhill have a settled side and plenty of quality. Bonagee will be another team in contention.”
Finn Harps Reserves manager Sam Hegarty was the last manager in the league to be appointed and he has only had two weeks to work with his team. He admits things have not ran as smoothly as he had hoped, but he is still optimistic ahead of their first game this weekend.
“We were disappointed the game didn’t go ahead last week. To say it’s been hard to get a game over the last few weeks with the weather would be an understatement. But we’re looking forward to getting at it again this Sunday,” said Hegarty.
“The bulk of our squad played with the under 19s. They are coming in on the back of the under 19 season and it’s just been a matter of fine tuning them and getting them into our way of thinking.”
Harps face a difficult opener this weekend against Rovers, and although Hegarty believes his side are in decent shape, he is worried that the Letterkenny outfit will be superior is the physical stakes.
“Fitness wise we are in good shape , but physically we’d be up against it. They’re used to playing against guys their own age, but they’re coming up against grown men in the Ulster Senior League and they will have to toughen up.
“Rovers have a lot of class in their team and we know it won’t be easy. They have Jonny Minnock, who is the record appearance holder for Finn Harps and has played at the top level in Ireland.
“They also have Stevie O’Donnell, Aaron O’Hagan, Oisin McMenamin and Matt Harkin, who have all played in the  Harp’s first team, so it is a game that our lads will be relishing.
“The aim for our guys is to emulate them and make the first team, so for development purposes, it’s a good opener for us.
Hegarty admits that winning trophies is not high on Harps’ agenda for the campaign, with the focus primarily on bridging the gap between under 19 football and Harps’ senior set-up.
“At the end of the day our goal is about developing players. I’d say it will be a miracle if we manage to get the same eleven out three weeks in a row.
“We’re just going to take it game by game. If we have success then happy days, but we won’t be upset if we don’t,” Hegarty concluded.