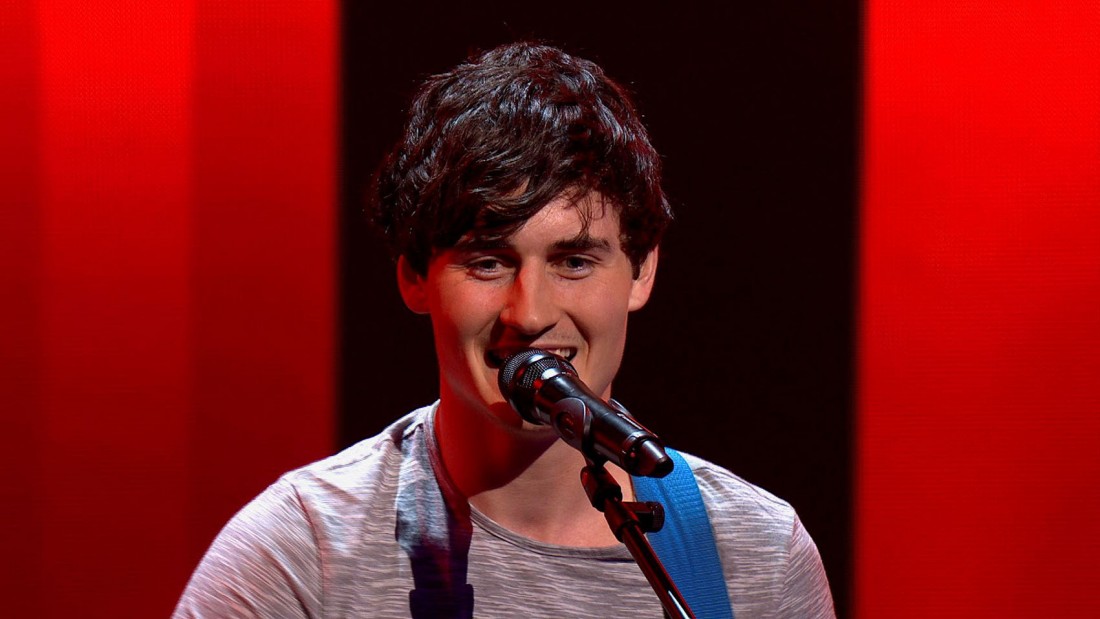 BY SEÁN P. FEENY
LAST NIGHT a young Glenties singer became the second contestant from Donegal to make it through to the battle stages of this year’s The Voice of Ireland on RTÉ.

Two weeks ago Kedar Friis-Lawrence (18) from Glen, near Carrigart was chosen to battle it out on Jamelia’s team and last night Paddy Molloy from Glenties was chosen by mentor Kian Egan to go through to the next stage of the competition.

Paddy is the second Donegal singer to be chosen by the former Westlife star who went all the way to the final with Shane McLaughlin from Downings last year.
After seeing the auditions for the third season of the show advertised online, Paddy decided ‘just to go for it’ and send off and application.

“I was down in Dublin at college anyway so I thought I may as well. So I completed the online application form, filling in all the details and submitting a video and then within two or three days I got a call from the producers asking me to come to a pre-audtion.

“A few days later I was in the Radisson Blu Hotel just off Grafton Street being interviewed and performing two or three songs. I thought ‘right, that’s probably it’ but then I got a call to come to another pre-audition and I did the same thing again.”

A few weeks passed and Paddy wasn’t expecting any news, until the phone call came telling him that he had been chosen to perform at the blind auditions.
Paddy said: “I think there were five days of blind auditions and they had wittled it down to 150 or 160 out of over 10,000 applications.”

At the blind audition Paddy decided to play one of his favourite songs, Fleetwood Mac’s Dreams, a song he plays regularly in his solo sets.
“I really love the song and I had performed it at the Opportunity Knocks competition in Donegal town a while back where it went down really well. It was just me and my guitar, no backing band, and I was so nervous before I went on stage, my whole throat dried up. I had been fine all day, but then it just hit me.”

Paddy just closed his eyes and started singing and didn’t realise mentor Kian had turned his chair until he heard the crowd cheering. “I was wondering what they were cheering about, as you don’t really hear the buzzer sound; then I opened my eyes and saw Kian.” The young Glenties man said Kian was the mentor he wanted to work with in the first place so he was even more delighted when it was him who chose him.

Paddy started his degree in commercial and modern music at BIMM Music College Dublin last September and has been honing his skills as a songwriter.
He has been studying under the top class tutelage of artists such as Cathy Davey and guest lecturers like Danny O’Donohue (The Script), Lisa Hannigan and many more.
“It’s all about continuous assessment and you have to perform the songs you write to the lecturers on a regular basis so it’s really been helping my writing.”

Paddy is now the second singer from Donegal to make it to the battles stages after 18-year-old Glen man Kedar made it through two weeks ago.
Paddy and Kedar’s paths have crossed before the two of them made it through to final 20 in Louis Walsh’s audition for a new boy band last summer.

With two such talented singers already through to the battles let’s hope that Donegal will have a representative or more once again in this year’s live shows of The Voice of Ireland on RTE One (Sundays, 6.30pm) following last year’s successful run.