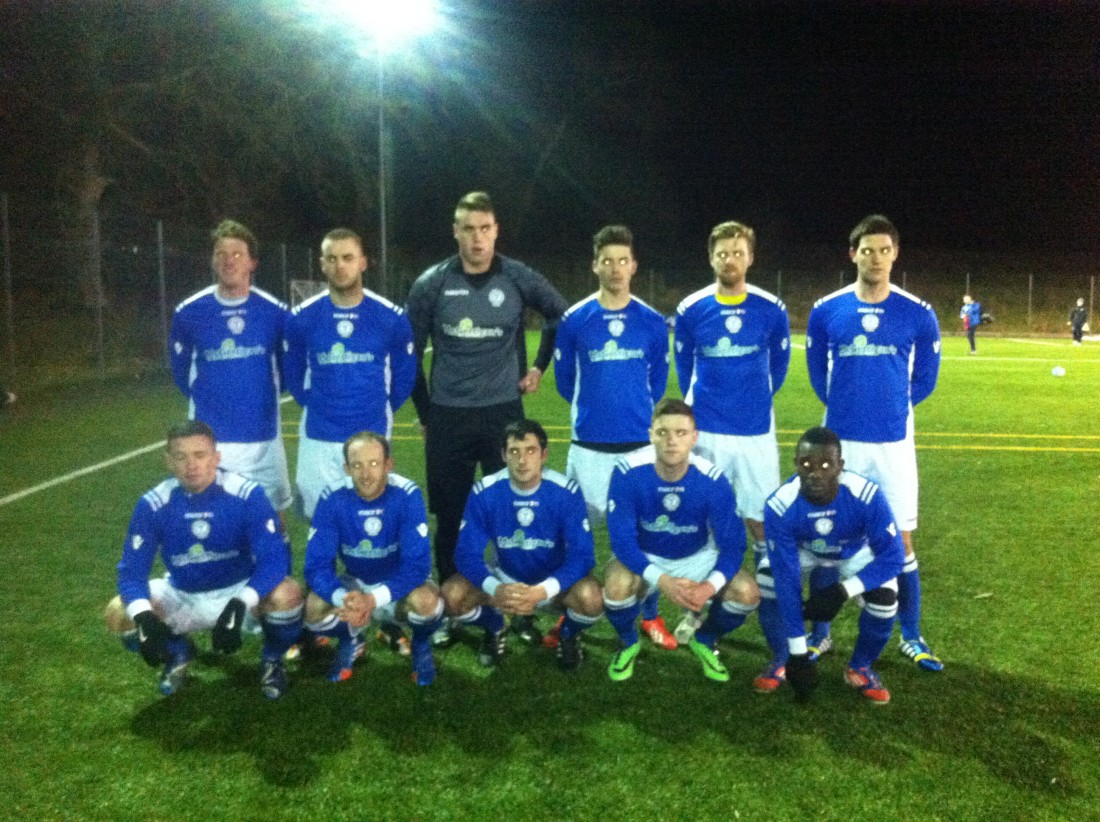 Finn Harps pictured before their game against Sligo Rovers.

By Chris McNulty at the Sligo Sports Centre

SLIGO Rovers forward Ruairi Keating will make a loan move to Finn Harps until the summer transfer window at least.

Keating played an hour on Saturday night for Harps in their three-nil loss to the Bit O’Red, with whom he recently signed a professional contract. A native of County Mayo, the 18-year old played with the Republic of Ireland Schools team, managed by Ollie Horgan, last season, and Keating has now linked up with the new Harps manager again.

The move is initially until the summer, when it will be reviewed.

On Saturday night, at the Sligo Sports Complex, Rovers cruised to a comfortable win thanks to goals from Paul O’Connor, Danny North and Danny Ledwith on a night when Horgan admitted that his side had been on the receiving end of a lesson from the 2013 FAI Cup winners.

“There was a gulf in class, without a shadow of doubt, but we are quite happy with what we found out about our own players,” Horgan said.

Ardee man Dean Gaynor, brother of the Sligo Rovers player Ross, was given a run out by Horgan in the second half, while Paul McVeigh appeared as a late sub and the manager confirmed that it is his intention to secure his signature ahead of the new season. Graham Fisher, a Canadian who has been on Schalke’s books, was absent because of injury but is expected to be assessed again by Horgan.

Keating has been with Harps in recent weeks and involved himself quite a bit on Saturday against his parent club. Afterwards, Horgan confirmed that Harps officials, including the club registrar Chantelle Grant, were finalising Keating’s move as his squad now nears completion.

McVeigh spent a couple of months in Boston after the close of the 2013 season and his return had been questionable. The Portsalon man now seems set to re-sign at Finn Park having been put on for the new season.

“We’re very happy to have him with us,” Horgan said.

“He’s a little bit off it, having been away for a time. He will get there. He’s naturally fit and he’ll get to the pace of it. We will be speaking with him in the next week.”

Ciaran Coll was absent from Saturday’s squad, the left-back suffering from sickness, but Horgan hopes to welcome him back to training on Monday night.

Ian Baraclough’s side were clearly a notch above Harps in a fixture that was moved from Finn Park and then moved to the all-weather facility in Sligo after the FAI declined the suggested Lakeside Centre in Ballyshannon.

They took the lead in the 24th minute when Aaron Greene and North combined superbly down the left to cut Harps open. Greene drilled in a low cross and O’Connor steered home with ease from 15 yards.

Rovers had gone close previously with Evan McMillan heading against the post and John Russell having an effort from distance deflected wide. North himself came close when he dispossessed Packie Mailey only for the goalkeeper, Conor Winn, to deny him at the near post.

Harps had all-too-rare forays into Sligo’s territory, although Kevin McHugh had one attempt cleared away for a corner and Keating forced a good save from Richard Brush after latching onto Pat McCann’s expert through-ball.

New signing Eric Odhiambo was proving a menace to Harps and he forced Winn into a strong save, but right on the stroke of half-time the lead was doubled as Seamus Conneely’s cross was converted by North.

Damien McNulty connected with a David Shovlin corner eleven minutes into the second half, but Brush was able to hold on and the customary raft of substitutions were about the only noteworthy happenings of a low-key second half.

Gaynor had one effort from distance that was easily gathered by Winn, while North dragged another attempt wide.

In the final minute, Sligo hit a third as talented youngster Ledwith found the top corner with a magnificent strike for the moment of the match, a stunning 25-yarder that gave replacement ‘keeper Shaun Patton no chance.

Moments earlier, Patton had denied Odhiambo with a strong save, but the youngster could not thwart Ledwith’s moment of magic.

“It was a good run-out, very worthwhile,” Horgan assessed.

Horgan says his squad has some work to do before Waterford United roll up Navenny Street on March 7.

The Harps boss said: “Sligo are full-time here and they’re a class act but, at the same time, Galway thumped them 5-3 recently. We watched that one down in Galway.

“Where does that leave Galway? You can use the excuse that they’re full-time et cetera but when Galway put five past that outfit we have got to wake up and realise the standard that is in the First Division. We already knew that to be fair.

“We’re not where we should be fitness-wise. We’re still a bit off it. We have three weeks to get that sorted. We’re getting there, but we’re getting there slower than what I’d have hoped. So be it. We will get back at it on Monday night and try to get at it for the Waterford game.”

This is set to be a busy week for the Ballybofey brigade. On Monday afternoon a Harps Select meets a Derry Select at The Vale Centre, Greysteel in a game that is expected to contain many of the sides’ Ulster Senior League players, while Harps are pencilled in to play the Irish Schools team on Wednesday night. Finn Park’s availability for that fixture is in question and Harps officials are exploring alternative options.

“We will train on Monday night then, have a weights session Tuesday, we have a game on Wednesday, training on Thursday and then we play UCD in Monaghan on Saturday,” Horgan said.

“We need every bit of it to catch up to where we should be. We’re not that far off, but we are off and we need to improve that.”