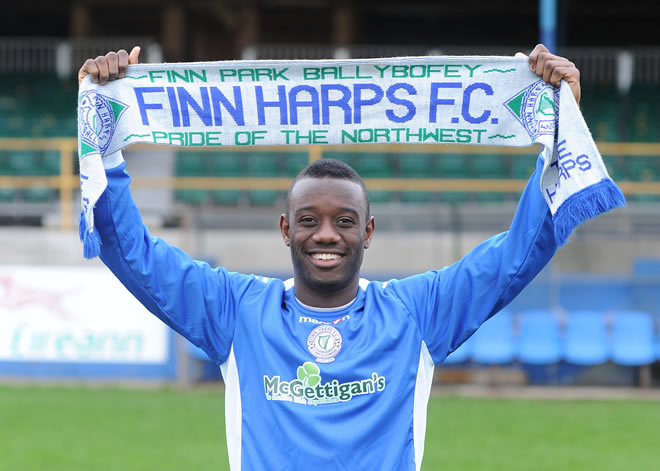 Carel Tiofack is expected to play for Finn Harps on Saturday.

THE inclement weather of the past week has resulted in a change of venue for Saturday’s pre-season game between Finn Harps and Sligo Rovers, with the game now due to be played at the Lakeside astro-turf pitch in Ballyshannon at 4pm.

Harps manager Ollie Horgan confirmed the change in venue, explaining the weather had taken its toll and made playing the game at Finn Park or The Showgrounds a non-runner.

“It is a little bit disappointing not to be able to get the game played at Finn Park and indeed not to get the game on grass, but at this stage any game is better than no game and we’re looking forward to the match now.”

The Harps manager has used the games they have played already in pre-season to run his eye over potential new additions to the Harps squad and with a number of weeks yet before the league opener with Waterford, he’s likely to continue that process for another few weeks.

A largely experimental Harps side took to the field last weekend in Newbuildings, losing 1-0 but afterwards Horgan described the game as ‘a very useful exercise.’

“All of these pre-season games are useful and we learned a lot from the game,” he said.

“At the minute we have everybody fit and available to us, assuming they all come through training on Friday night we’ll have a full squad to choose from.”

Not unduly concerned about defeat last weekend Horgan suggested that the games against the likes of Sligo, UCD and Dundalk would test the mettle of his squad even more.

“We got a fair test against Newbuildings, it was a very good workout, but I’d expect that games against Premier Division sides like Sligo, UCD and Dundalk will push the lads even more.”

Those games – starting with tomorrow’s clash with Sligo Rovers – will give the Harps boss an opportunity to further look at his options and he has already admitted that there will be changes to the squad before the league campaign kicks off.

“We have the bulk of the squad in place already but there are one or two spots still to be filled and there will be a few players released as well. These games are important because it gives a good insight into the players we have and allows them to stake a claim for a place in the squad.”

Among those looking to impress are Rory Keating on-loan from Sligo Rovers, while Graham Fisher once on the books of German outfit Shalke may also be given another opportunity to impress.

Goalkeeper Conor Winn has joined Harps and will be anxious to secure the number one jersey while Carel Tiofack who spent two years at Ipswich has already put pen to paper and will be keen to make an impression again after shining already against Premier Division outfit Cork City.

Meanwhile, Harps have been drawn to face Ulster Senior League double winners Cockhill Celtic in the first round of the EA Sports League Cup. The game will take place at Finn Park on Monday, March 10th at 7.45pm, just three days after Harps’ opening League game of the season at home to Waterford United.

Harps are in Pool 2 of the League Cup. While Premier Division sides Derry City and Sligo Rovers have been given byes, the newly-formed Galway FC will host the Mayo League and Eamonn Deacy Park, also on Monday 10th. Derry and Sligo go into the hat with the winners of the two games for the second round draw.