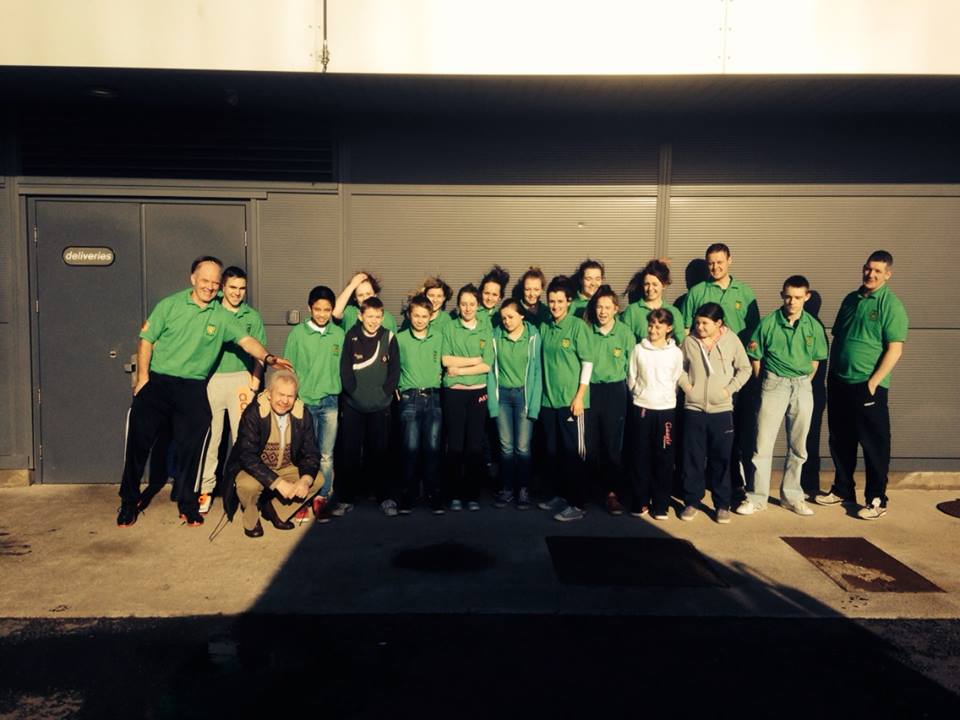 The Donegal team that traveled to Kildare.

A DONEGAL boxing team was narrowly beaten, 9-8, by Kildare in a cracking inter-county tournament at the St Brigid’s club in Maynooth on Saturday night.

Before a bumper crowd, seventeen action-packed contests and one exhibition bout took place with the home boxers holding sway in the tally.

There were some strong performances by Donegal boxers. Even in defeat, Labhaoise Clarke was able to show enough of her talents to win the boxer of the night award.

The Carndonagh ace lost out to Natasha Logan on a split decision in a rousing 54kgs bout. It was edge-of-the-seat stuff, but it was Logan who got the decision. The contest went all the way to the finish and the boxers were practically inseparable. Clarke is an exceptional talent and, although beaten, this was recognised as she took home the boxer of the night prize.

Club-mate Johnny Simpson took a split decision win over Gareth Dillon in a Boy 2 36kgs contest, but Dean Doherty was beaten 2-1 by Jackob Florzak at 54kgs.

There was a very impressive display by Twin Towns’ Ciara Anderson. A grand-daughter of former Olympian Brian Anderson snr, she is cut from the family cloth alright. And in an excellent 46kgs contest, the Ballybofey girl scored a 3-0 win over Niamh Carty and displayed sure signs that her’s is a name on the rise.

Twin Towns man Kevin Maguire overcame the challenge of Karin Nancian at 75kgs thanks to a powerful display.

Former Irish champion Niamh McCole (Dungloe) turned in a brilliant performance at 52kgs to defeat Niamh Earley 3-0 in a fight that had the audience on their feet from start to finish. The Dungloe southpaw was superb to claim an impressive unanimous win.

Raphoe young gun Liam McMonagle was beaten by Sam Gilroy on a split decision while there was a winning debut display by Ciara Doherty of St Brigid’s Clonmany, as she overcame Megan Hannigan at 54kgs.

Chantelle Dixon was pipped by Sarah Edge and Grainne Gallagher was narrowly defeated by Charley Horgan.

James McCarron travelled as referee/judge while the Kildare team was put together by Paddy Gallagher, a former St John Bosco middleweight who is now involved with the Irish Elite Schoolboys team. County coaches Johnny Mulhern and Danny Clarke were in the corner and the team manager was Peter O’Donnell.

THE North-West Zones for 14, 15 and 16-year olds will be staged in the Letterkenny Gym on Sunday, February 23 with the weigh-in from 9.30am to 11am, the draw is at 12noon and boxing is at 1pm.
The Ulster finals for these boxers will be staged in St Patrick’s Hall, Strabane on Sunday March 2.

There are two club tournaments in Donegal next weekend: Twin Towns host a big night on Friday 21st in Jackson’s Hotel while there is another in the Plaza, Buncrana on Saturday 22nd.