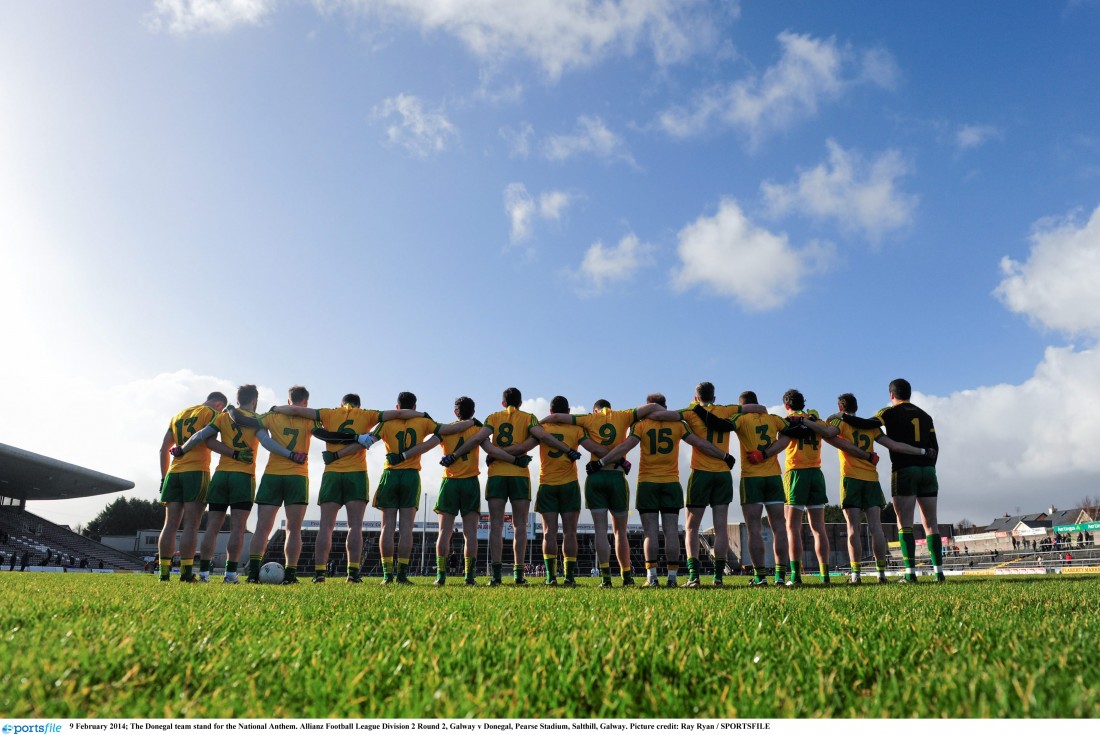 The Donegal team stand for the National Anthem before their game against Galway in Salthill. Photo: Ray Ryan/SPORTSFILE

BY CHRIS MCNULTY IN GALWAY

JIM McGuinness hopes to have something closely resembling a fully-fit panel at his disposal when Monaghan roll up to O’Donnell Park, Letterkenny for their next Division 2 encounter on Sunday March 2nd.

Neil Gallagher played the full second half yesterday as Donegal coasted to another impressive win – a 1-16 to 0-12 win over Galway at Salthill’s Pearse Stadium.

Gallagher returned from the hamstring injury that had dogged him in recent weeks as Donegal hit the summit of Division 2, going out on their own at the top, just ahead of their next opponents.

With two wins from two games on the road, Donegal’s confidence is high and with their next encounter happening to be a repeat of the 2013 Ulster SFC final there’s a fair chance that St Eunan’s could be dusting down the ‘sold out’ signs when the Farney men – 0-20 to 0-8 winners against Meath yesterday – come to town.

By then, David Walsh and Darach O’Connor could be available again. Both are sidelined with hamstring injuries at present, but will be well on the mend in three weeks’ time.

The time-frame for the welcoming back of Paddy McGrath – who hasn’t played this year yet because of a Gilmore’s groin injury – appears to be a little further away.

Yesterday, McGuinness said he hoped the Ardara corner-back would be ‘back for the end of the League’.

“The big thing that we want out of the League is to have a squad that will compete in the Championship,” McGuinness said.

“To do that, we have to get lads integrated and expose the younger lads to the League. We will keep rotating players in and out. Hopefully by the time we go to Armagh in April everyone will be up to a decent level.

“You want to win every game and we want to marry that with men coming back. Neil came back today, which was great.

“We’ve got back Karl Lacey and Frank McGlynn too and we’d hope to have Paddy McGrath back for the end of the League.

Colm McFadden’s goal in the 14th minute steered Donegal to a win in front of a big contingent of traveling supporters from the north-west.

As they made their way back up the N17, they’ll have reflected on another useful day for their side. McFadden’s goal gave them a 1-6 to 0-4 interval cushion and, with the going heavy in the second half, they were never really in danger.

Sub Patrick McBrearty kicked three points late on, while Ryan McHugh and Martin McElhinney were both excellent for the victors on an afternoon where Galway were left with more questions than answers.

The trusted blue whistle is back on display around Jim McGuinness’s neck again and the Glenties man is already eyeing up next month’s re-match with the side who denied them in Clones last July.

He said: “We said that if we could get points at all away from home that it would be a good start.