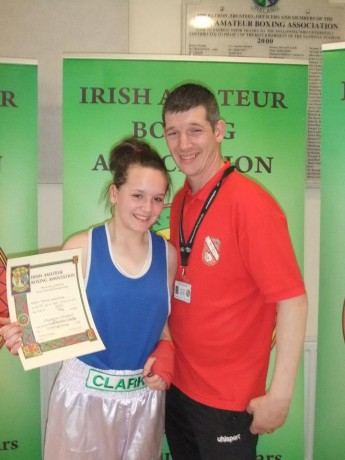 Carndonagh’s Labhaoise Clarke is in action this weekend in Maynooth. Also pictured is her father, Danny, who is one of the traveling coaches.

A Donegal boxing team travels to Maynooth for a major inter-county tournament against Kilcar at the St Brigid’s club on Saturday.

It comes just a couple of weeks after the first-ever female team went out of the county for an inter-county tournament as a Donegal select record a win down in Mayo.

This weekend, a team comprising of both male and female boxers, will head for Kildare.

The team will be managed by Peter O’Donnell of the Raphoe ABC, whille county coaches, the Carndonagh duo of Johnny Mulhern and Danny Clarke have been busy match-making the contests.

The team contains quite a few notable names, not least the Carn sisters Jessica and Labhaoise Clarke, who have been making big waves of late. They are joined by club-mates Johnny Simpson and Dean Doherty.

The Anderson name is synonymous with boxing in Donegal and Ciara Anderson, of the Twin Towns BC, is back in action this weekend. A grand-daughter of the great Brian Anderson senior, an Olympic boxer in his day, Ciara is joined on the traveling squad by club-mate Kevin Maguire.

Dungloe’s brother-sister Irish champions duo of Niamh and Mark McCole are among those who’ll take to the canvas, while the St John Bosco club is represented by Pamela Mahon and Sophia Price.

Raphoe young gun Liam McMonagle will be in action, too, while the females have been selected out of the Sunday morning squad training sessions in Raphoe and Tyrone boxers make up the remainder of the traveling squad: Lisnafinn’s Emma McGlynn, Immaculata Strabane’s Tamecka Lindsay and the Two Castles duo of Grainne Gallagher and Alannah Maise.

James McCarron will travel as referee/judge while the Kildare team has been put together by Paddy Gallagher, a former St John Bosco middleweight who is now involved with the Irish Elite Schoolboys team.

THE North-West Zones for 14, 15 and 16-year olds will be staged in the Letterkenny Gym on Sunday, February 23 with the weigh-in from 9.30am to 11am, the draw is at 12noon and boxing is at 1pm.
The Ulster finals for these boxers will be staged in St Patrick’s Hall, Strabane on Sunday March 2.

There are two club tournaments in Donegal next weekend: Twin Towns host a big night on Friday 21st in Jackson’s Hotel while there is another in the Plaza, Buncrana on Saturday 22nd.