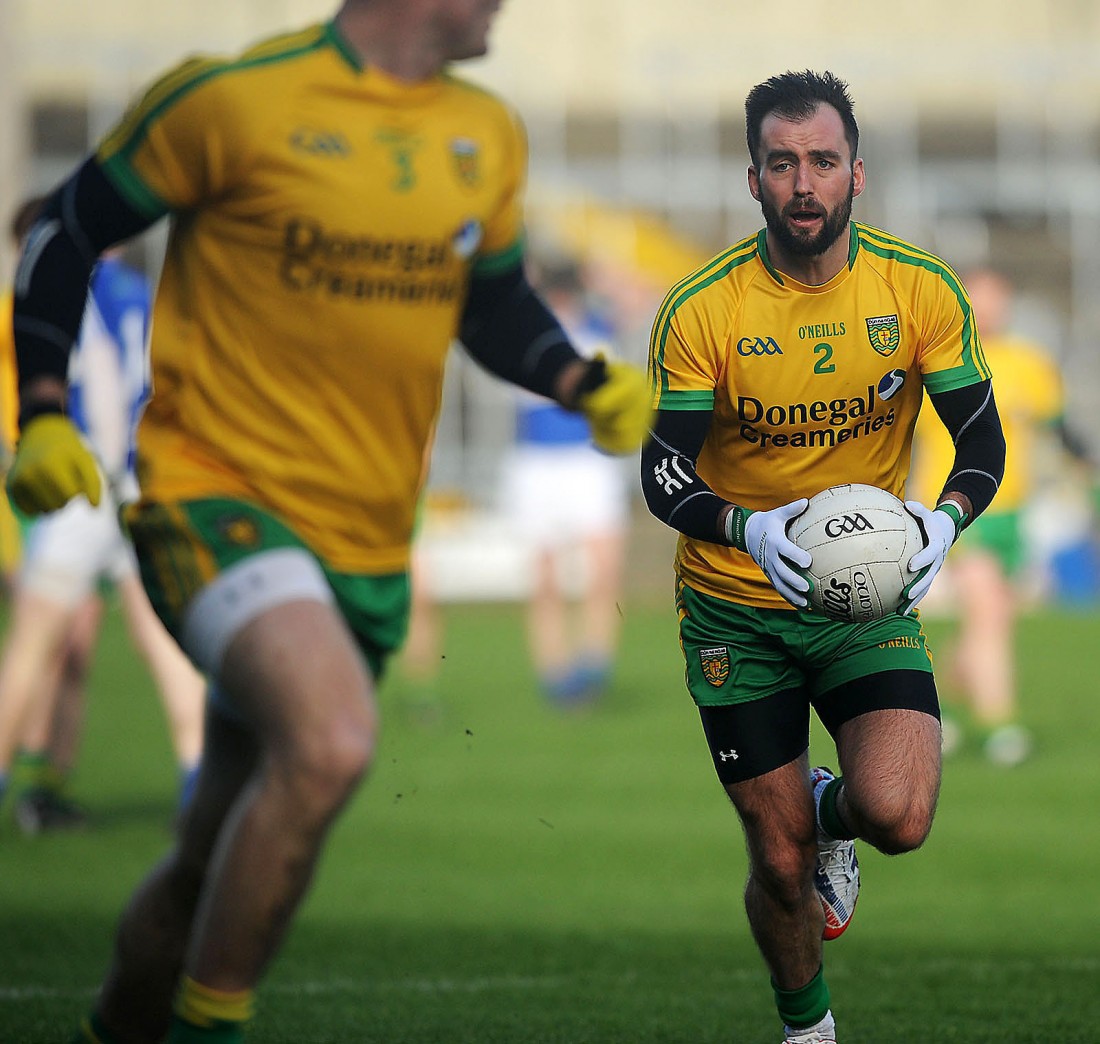 The return of players like Karl Lacey has been a huge boost for Donegal.

THE amount of players who are missing from teams at this point in the season is bordering on crazy.

There are so many teams who are down players.

Last Saturday, Dublin only played four of their All-Ireland winning team from the start of their League game against Kerry, who had half a team missing from their last outing, that epic All-Ireland semi-final against Dublin in August.

It was a smilar story for Cork and Tyrone are still missing key men like Sean Cavanagh, although he seems to be on the way back into their squad ahead of this weekend’s game against Mayo.

It is surely unusual to have such an amount of players injured at this time of the year.

It looks, in a lot of the case, as if these are injuries that have been picked up during the closed season – a time that is supposed to be for rest and recuperation.

A lot of teams are working away over the winter, but there does seem to be an unusually high number of players who are on treatment tables right now.

Donegal, though, are an exception to the rule in a way, in that Jim McGuinness is in the process of inserting the last few pieces into his jigsaw. Neil Gallagher is back in the squad this week meaning that only Paddy McGrath and David Walsh, who will be back for the Monaghan game next month, and the suspended Eamon McGee are missing in action.

For the second weekend in February that is not a bad place to be in.

While it’s good now, Donegal really cannot afford any injuries and the only side that can cope with a big amount of absentees is Dublin.

Donegal had many positives last Sunday, not least the return of Christy Toye, who is back after a very difficult time last year. He was in with a Man of the Match display and Christy is a man with huge experience. He has plenty to offer if he can get a season injury free.

Jim McGuinness always states that he wants to unearth a couple of new players ever year – and in Odhrán MacNiallais he has found a man whose line is heading upward on the graph. He came in and impressed so well during the McKenna Cup that the manager simply had to select him for Portlaoise.

He didn’t let the side down, scoring 1-1 – not a bad return for a League debut.

Odhrán is a very cultured player with a superb left foot. We have some fine talented left-footers now if you take Colm McFadden, Patrick McBrearty, Dermot Molloy and, now, MacNiallais.

There aren’t too many counties who could have that prolific streak off its left boots – any of those players are capable of putting over big scores.

The break has done McBrearty good. He had a groin operation, but has come back full of vigour and is looking pretty sharp.

Anthony Thompson’s was another very encouraging display on Sunday, in his first game of the year for Donegal. He’s an established player, but he’s a man you don’t often see in the headlines. He is one of the unsung people in the team and goes about his business quietly and effectively.

He was excellent on Sunday, particularly in the first half. What he contributes going forward is almost as important and impressive as his defensive work.

Ryan McHugh was selected at corner-back and there were quite a few eyebrows raised when that one was announced.

The feeling was that Ryan would play out the field and a defender would be brought into the corner. But, no, there was the Kilcar man at corner-back – and it was a move that paid off for player and for team.

Sometimes you come up against these nippy corner-forwards who need someone of the same make-up to do a job. Ryan fitted the mould on Sunday and he filled it well. He is an excellent footballer of extreme intelligence, yet he showed on Sunday that he can mix a bit of brawn with the brain, too. He’s a player to watch out for in 2014, for sure. He can play anywhere and can live at this level, no question.

The real encouraging thing was the performance of the team and its components when a number of key personnel are still coming back from injuries. When Eamon McGee and Paddy McGarth are ready for action, who makes way? Will Neil Gallagher go back into midfield? What about David Walsh, who was somewhere between sometime-starter and regularly-used sub?

These are the sort of headaches that suggest competition for places in the first fifteen is intense and, hopefully, the kind of sore heads that Jim McGuinness won’t mind at all if he can put his feet up with a fully-fit squad on his list.

The result was emphatic on Sunday, but that isn’t really the important thing. At this stage it is more about assessing fully the credentials of these young lads looking to climb the ladder or those men, like Toye for instance, who wish to send out a little reminder that they can still cut the mustard.

All of that combined makes for a lethal concoction and the whole picture looks to be a strong one.

Donegal were ruthless, though they could have been even more so in the first half. 2-19 was a fine return for the opening League game in such conditions. With Laois on the floor, Donegal had their feet on the Laois neck and, in the second half, pressed down upon their heels.

It was a result that will have given a real injection of confidence to the panel. While I expect Sunday’s game in Galway to be much tougher, I still expect Donegal to win it with a bit to spare.

A win on Sunday would set Donegal up extremely well heading into a break before they play Monaghan on March 2.

THE retirement announcement of Paul Galvin was a real jolt on Saturday night.

In the moments after Kerry were beaten by Dublin at Croke Park, Eamon Fitzmaurice confirmed that the enigmatic Galvin had stepped aside and a statement on the player’s website outlined that he could no longer give the required commitment as he is based in Dublin.

That he even has his own personal website perhaps tells its own story.

He was one of the great players of his generation and one of the best wing-forwards of all-time.

In many ways he was a player before his time when you look at the amount of work he’d do up and down the park for Kerry, helping out at defence, picking up breaking balls and linking up the scores at the other end.

A charismatic figure, he had some cracking tussles and his battles with Cork’s Noel O’Leary should be written about at length.

Galvin always got a share of abuse from opposition supporters but, then again, the great players always do, don’t they?

Without a doubt he was an oustanding player and Kerry will be much the poorer without him.

Tyrone’s leader is back

DERRY are a side we’ll keeping a close brief on over the next few months, not just to see how Brian McIver is getting on, but because they happen to be Donegal’s opponents in late May in the Ulster Championship.

An opening day draw with Tyrone was a game Derry deserved to get something from. Derry got a draw, but will feel they should have won and I’d say Mickey Harte was quite content to get away from Celtic Park with a draw.

Tyrone have a lot of new lads in but they are, big time, missing Sean Cavanagh. The leadership he brings to their game just lifts the whole thing. When he is missing they’re a different outfit. He’s their leader. Take the leader out of any side and you’ll see a considerable weakening of their arsenal.

Cavanagh’s return should take the Red Hands up a notch, though.

IT WAS a sign of the times that three amalgamations for minor football were passed on Monday night at the county committee meeting. It is, perhaps, a little worrying when there are three amalgamations just to get teams gathered up, but that is the age we find ourselves in.

A bigger surprise for me was that two of them (Naomh Brid-Pettigo; Fanad Gaels-Downings) went on unopposed, but there was objection from a few clubs for a coming together of Dungloe and Na Rossa for minor football.

I’m disappointed in those clubs who opposed the amalgamation and tried to block it. Sometimes clubs need to look at the bigger picture.

In Na Rossa, we have a massive struggle on our hands right now – and ten lads would have been out of football at minor level had this not gone through.

There are three schools within Na Rossa’s catchment area and between them they have 70 pupils between the ages of four and 12. Over 50 per cent of that are girls, so between those ages there are only around thirty boys in the club’s area – and not all of them are going to play football, either.

It is difficult to survive. We haven’t had a reserve team for two years now and last year we actually struggled to field on occasion.

Quite simply, these lads have to be given an avenue to play at their level and I’m glad that common sense prevailed with this one.

COLAISTI Inis Eoghain has been a magnificent venture by five schools in the Inishowen peninsula – and on Tuesday night they won their MacLarnon Cup quarter-final against St Patrick’s, Downpatrick.

I am a great admirer of the work going on in Inishowen. There are a lot of great players coming through in the area and I have a few on the minor squad. It’s great for an area that was neglected for so long. Credit to the clubs and schools, not to mention people like Sean Noonan, Sean Clerkin, Robert Farren, Gerard Callaghan and company.

Good luck to them in the future – and good to St Eunan’s who face St Columb’s on Friday night.