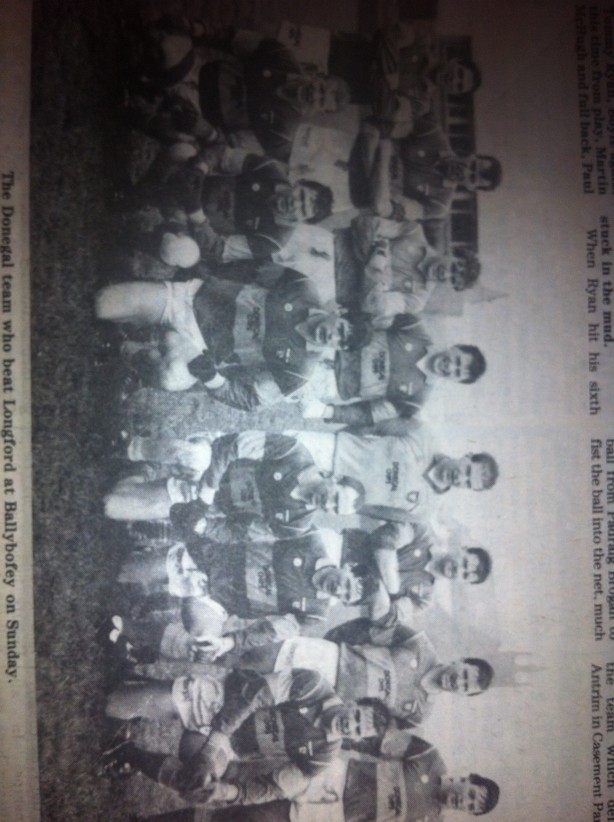 Declan Bonner (front left) with the Donegal team that defeated Longford in the National League in 1991. Declan togged for Finn Harps earlier that day.

PETE McGrath, the new Fermanagh manager, laid it on the line last weekend.

The Erne men defeated Sligo at Brewster Park, but their big win was overshadowed somewhat after the game when McGrath took the spotlight.

Seamus Quigley and Niall Cassidy had been axed from his team for opting to play in a soccer match in the Fermanagh and Western League earlier that day.

Quigley hit two goals as his Lisnaskea Rovers lost 4-2 against Enniskillen Town. While Cassidy was also dropped, McGrath has said that Quigley is now on his last warning.

“Anyone who is in this squad and wants to stay in this squad can have no involvement with soccer,” said McGrath, leaving no ambiguity about his stance.

“They have to be fully committed. You can’t dabble in all things so the choice is clear. If you’re not matching the standards of other counties and are ambivalent, then you’ll be caught out, individually and as a team.

“They are not gone (from the squad) but they know the situation and they didn’t object to anything I said.”

Gaelic football has gone into a new stratosphere.

Eoin Bradley was a key player on the Derry side for years, but he’s now a goal-scorer of some renown in the Irish League with Coleraine and he has been unfairly criticised for playing with the Bannsiders.

It all comes racing back to that one, burning question? Can both games be played?
Definitely not. The GAA has gone totally professional and it’s no longer possible to do both at a high standard.

One day in 1991, I played one Sunday for Finn Harps at Finn Park at 12noon against Cobh Ramblers. Straight after the game, and still in my gear, off I went over the road to MacCumhaill Park to play for Brian McEniff’s Donegal in a League game against Longford.
Harps, for the record, drew 1-1 with Cobh and Donegal beat Longford 1-7 to 0-1.

That wouldn’t happen now. There’s no way either Ollie Horgan or Jim McGuinness would accept that.

It also reminds me of the day, in the 1980s, when Declan McIntyre was substituted at half-time in a county senior final he was playing for Four Masters in, to go over and play a game for Harps.

Can you imagine the uproar now if that happened?

Gaelic football is not just about six months of the year. At that stage we would have had a couple of League games before Christmas then we’d have broken for a while and gone back at it in February again with the resumption of the National League.

It was difficult to combine both but at least the window to do it was there. Now if there is a break, players are training right through. We hardly knew what strength and conditioning was!

You couldn’t imagine a player doing three or four days of intense gym work and then going out to play a soccer match that Sunday.

Brendan Devenney played both codes quite successfully, but nowadays the demands of the thing have rocketed to new heights altogether and I don’t think we’ll ever see those days again.

The most recent example of it is Hughie McFadden, who is back making waves at Gaelic football with Killybegs and Donegal after being at Sligo Rovers while on a soccer scholarship in Sligo IT.

There are others, like Cillian Morrison who is on a soccer scholarship at UCD – he played in the All-Ireland Under-21 final in 2010 against Dublin.

There have always been top players in Donegal who could play both at the top level.

Even on the current minor squad, a number of the lads are very talented soccer players and it will be very difficult to combine both.

The question is always put to me: How did you do it?

Quite simply, we’re in a completely different era now. That was 23 years ago and it was hard enough even back then.

At the level the GAA has gone to, especially at teams like Donegal, Tyrone and Derry, teams who have professional set-ups, there just simply isn’t the time to dedicate yourself to two sports.

I would encourage young lads to play any sports for as long as they can, but as a manager there may come a time when you’ll have to ask a player to make a decision.

You will get away with it, but only up to a certain point.

Joe Gibbons of Glenswilly gave a great quote to this newspaper during his team’s run to the Ulster senior club final in December. Joe doesn’t play any other sports, but he was outlining the level to which preparation has gone. “It all started off as a passtime, but you can’t treat it like a passtime now.” That really summed it up.

The worrying thing in all of it for me is the answer to the question of where it’ll be in ten to fifteen years’ time.

The change in the last decade has been unbelievable. If it keeps growing, Gaelic football could become bigger business than we can handle as amateur sports people who hold down daily jobs.

LAOIS and Galway mightn’t be the most formidable of opponents that we’ll face this year, but you can only beat what comes out to play you. Donegal have set about their stall in the correct manner, going all out to win every game and getting back into Division 1 at the first attempt.

The plan is about much more than simply just winning promotion back into the top flight, it’s about getting confidence back up again. The plusses that Jim McGuinness will have witness will certainly have given the confidence a lift.

His squad is getting bigger and stronger. Last year we were saying that Donegal had two or three men to take off the bench, at a maximum, but now there are a few more options to select from.

Getting into ‘the 20’ is now a big task and a lot of men are putting their hands up.

Last weekend, Martin McElhinney and Ryan McHugh were two cases in point. Ryan is a superbly talented footballer. People have noted his height and physique as points against him, but his football brain gets him over any hurdles. As a footballer, he has it all. He has a year behind him and he’s really one to watch.

He’s great at linking play and, all-round, he has a lot to offer.

Martin is a player who has been around for a while now, but last Sunday was probably his best game in a Donegal shirt.

I was talking to Anthony McGrath, the Queen’s University manager, and the word was that Martin was in very good shape and was training well. He appointed him as the captain of their Sigerson team and he was very impressed with his attitude and application. That was very encouraging to hear.

Midfield is an area that we don’t have strength in depth for so it was very good to hear positive soundings about a player like Martin – who has the attributes to force his way in there.

A real positive in these early moments of 2014 has been the return of Karl Lacey, Neil McGee, Patrick McBrearty and Neil Gallagher coming back from injuries and doing well.

There have also been players, like Dermot Molloy for instance, who have been given spots and who have stood up to be counted.

With big players still to return you’d have to say that it has been a very encouraging start – but the next game against Monaghan will be a huge fixture. There’s a good buzz about Donegal folk again and there were excellent supports in Laois and Galway. It wouldn’t at all surprise me if the next one was a sell-out in O’Donnell Park.

DERRY have made a good start to their campaign, too, and got an impressive win in Killarney last Sunday. Fergal Doherty has come back into the mix and will be a massive player for Brian McIver in the weeks and months to come. On his day, he can be one of the most dominating midfielders in the province.

Tyrone always seem to look sharp at this time of the year and last weekend young Darren McCurry gave something of a masterclass. He hit two top-class goals and looks like a player who could become a real gem.

Even at this early stage, with the 2014 Ulster Championship in mind, it is very hard to think outside of Donegal, Derry and Tyrone in terms of assessing those with hopes of getting their hands on the Anglo-Celt. And one of those will be gone on May 25.