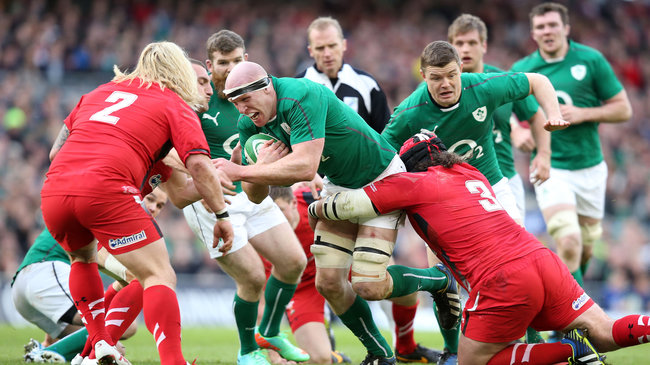 Paul O’Connell on the charge against Wales.

THERE is something exciting about watching the Irish rugby team that is difficult to put the finger on, but watching them win, somehow, makes you feel really good – especially when they win in the manner they did at the weekend against Wales.

Such has been the strength of Welsh rugby under Warren Gatland that it was easy to feel a little bit concerned about our chances of winning and setting up a Triple Crown clash with England in two weeks’ time.

Statistics now play a huge part in analysing a contest, no matter what the sport; ‘turnovers’, ‘passes completed’, ‘shots on target’, ‘first serves in’, ‘boundaries and sixes scored’ are now all common phrases, depending on the sport.

Looking at that on the face of it the game should have been close. As we know that wasn’t the case as Ireland won 23-6, a comprehensive win in anyone’s terms.

In his analysis of the game former England centre Jeremy Guscott made a number of excellent observations.

He opened by saying that every school bully eventually meets his match and gets what’s coming to him. That is what happened to Wales on Saturday. This couldn’t be described as a sub-standard Welsh performance. Rather, it was a case that Ireland didn’t allow them to play as the Welsh normally do.

The Irish started by not allowing them to play an expansive game and Wales clearly had no Plan B.

Ireland had plenty of brilliant individuals, but Guscott rightly pointed out that this was ultimately a team effort. He also made the point that the Wales scrum-half MIke Phillips’ liking for confrontation only led to frustration and he lost out in all areas of his play by allowing those to get the better of him.

For some reason, this most talented and committed player has been getting a raw deal from the international set-up for a few years now, especially under the management of Declan Kidney. Interestingly, new coach Joe Schmidt hadn’t included Trimble in his original 40-man squad either, but injury forced his call-up.

Trimble’s performances against Scotland and Walsh have surely proved that omitting him was a serious misjudgement on the coaches’ behalf.

During a troubled time, Trimble kept his head down and has proved in the last two games that keeping your counsel is sometimes the best player. He’s also gone to prove how valuable a player he really is.

Let them at it!

LIKE him or not, it is always interesting to hear the views of Brian Cody.

Earlier this week, the multi All-Ireland winner came out in support of another Cats legend, Eddie Keher, who wants the use of cards in hurling to be stopped.

Cody backed up Keher’s assessment that the unfair sanctioning, due to fouls by players full of ‘honest endeavour’, was having a negative impact on matches.

Cody claimed that it was significant that a stylish, elegant player like Keher would come out so strong to defend the integrity of the game. He also backed up support to Keher by claiming that there were enough deterrents to do away with the need for cards, mainly through the use of television technology and replays.

If my memory serves me right, it isn’t too long ago since Cody was strongly objecting to the use of TV replays, saying that what went on on the pitch should stay on the pitch. Admitting that, occasionally, a player will overstep the mark but there are rules there to deal with it, Cody claimed that there was no dirt in the game and that any attempt to develop it into a non-contact sport would ruin the game of hurling as we know and love it.

Without saying as much, it appears as if Keher and Cody are suggesting something akin to a ‘let them at it’ policy.

That, you might say, is going a bit far, but there again it is still early days of the black cards in the football and it has yet to prove itself as having been a success.

Football and hurling, of course, are different games and need to be dealt with as such.

One thing is certain – if players think that they can take matters to the edge and beyond without the fear of being punished then, as the past has proved, that is exactly what they will do.

In those circumstances, it’s hard to believe that the game will be the better for it.

Only time will tell.

To kick or not to kick?

It seemed an incredible decision given the evidence produced by television replays of the incident.

Touré clearly kicked his opponents in the lower back region in a moment of sheer frustration during the scoreless draw. None of the match officials saw it, which was a surprise in itself, but how three people with the benefit of clear pictures could decide that no action was required was beyond belief. So much for Brian Cody’s assessment that television replays are enough of a deterrent for foul play.

When is a kick not a kick? When three men are given the task of looking at it and see nothing is perhaps the only conclusion.

DONEGAL had another good win in Galway on Sunday. They played very well against a strong breeze to lead by five at half-time. When Galway closed the gap a couple of times after the break, Donegal were able to up the ante and push the lead out to a comfortable margin. Scores of 2-19 and 1-16, to go with wins by 13 and seven points are impressive and four points from two games represents an excellent start.

Twenty-three players have seen action so far and, with a few more on the way back – not to mention Eamon McGee now being clear of suspension – Jim’s options are improving, which can only be a positive with a busy schedule of five games in six weeks when the action resumes on March 2.