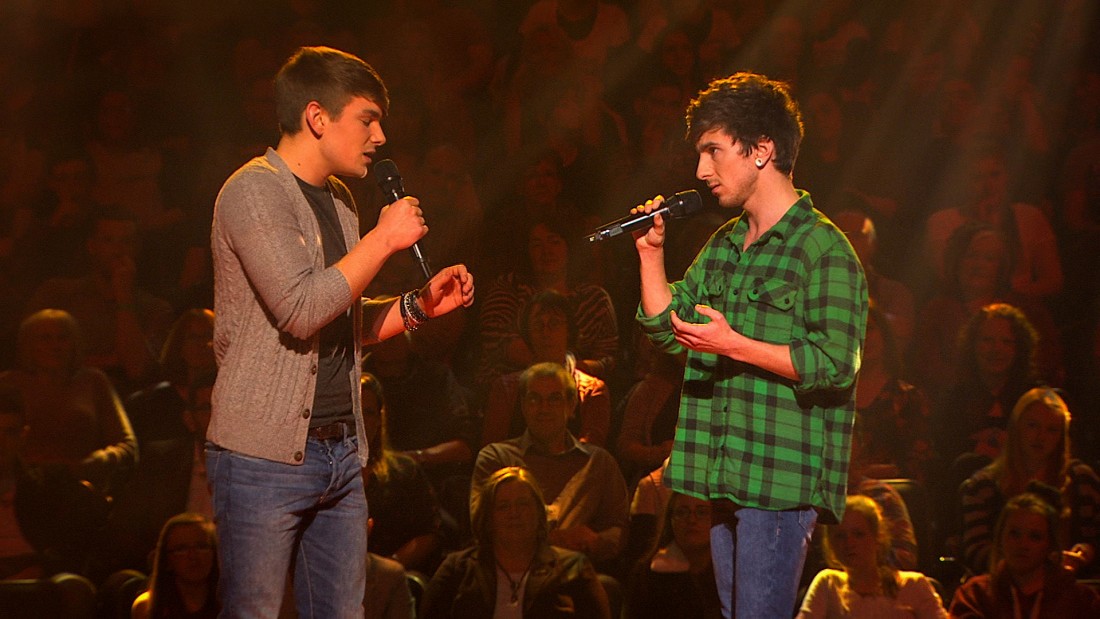 Kedar and Caoin battle it out on Wuthering Heights.

BY SEÁN P. FEENY
Last Sunday a young singer from Glen near Carrigart was the first of two Donegal men to compete in the battles of this year’s The Voice Of Ireland on RTÉ One for a coveted place in the finals of the third series and he did it!

After tossing a coin to see whether to go with ‘Superstar’ judge Jamelia or Niall Breslin in the early stages of the blind auditions and ending up with the Mullingar man, 18-year-old Kedar Friis-Lawrence had a tough task ahead of him battling Caoin Fitz. 21-year-old Dublin man Caoin made it through to the battles stages following his performance of Matt Corby’s Made of Stone. A student at the Rock School in Ballyfermot, Caoin performs regularly on the Dublin music scene with his band.

Kedar said: “After we went though the blind auditions we were all taken to Dublin to be given our song and who find out who we were battling.
“I met Bressie several times, firstly to get my song, then to have a rehearsal and then for the sound check for our battle performance.”

Bressie made a very unusual choice of song for the battle between Kedar and Caoin who sang Kate Bush’s Number 1 hit, Wuthering Heights.

Kedar said: “Bressie said he believed that Caoin and I had great voices and that we could pull off such a challenging song. I didn’t know Wuthering Heights well, but after getting to know the song, I loved it and our twist on it was great.

“I was very nervous before the battle, but as soon as I got onto the stage all the nerves went and it all turned to excitement with the whole crowd behind me cheering and I think I gave the best performance I have ever done of the song.”

Kedar got so much great feedback on his performance of the song. “I got all positive feedback; Jamelia even forgave me for the coin-tossing,” he laughed.

It’s not easy getting to know someone during the audition process and then having to battle them for a place in the live finals, but Kedar and Caoin have remained friends, of course.

Being one of the first through to the live finals, Kedar now has plenty of time to work on his first song and will meeting with Bressie to choose what he will sing.

He said: “I also plan to try go to different schools in Donegal, round up the support and also see if I can get sponsorship from local businesses.”

Kedar grew up in Kent, England, but has been living in Donegal for the past eight years. His mother Judi Friis owns a homeopathy clinic in Letterkenny, while his father lives in his native Denmark. He is a passionate musician with a love for jazz, classical music and pop, who writes his own material, can play piano and performs live regularly. Kedar is also a member of The Conwal Singers Choir and The Northwest Opera Society.

Whether it’s all his friends at St Eunan’s College, music societies, or his Brazilian Jiu Jitsu club, Rilion Gracie Ireland in Letterkenny, Kedar has a lot of support in Donegal.

The next Donegal man to ‘battle’ for a place in the finals is Paddy Molloy from Glenties, so don’t forget to tune into The Voice Of Ireland every Sunday at 6.30pm, only on RTE One.