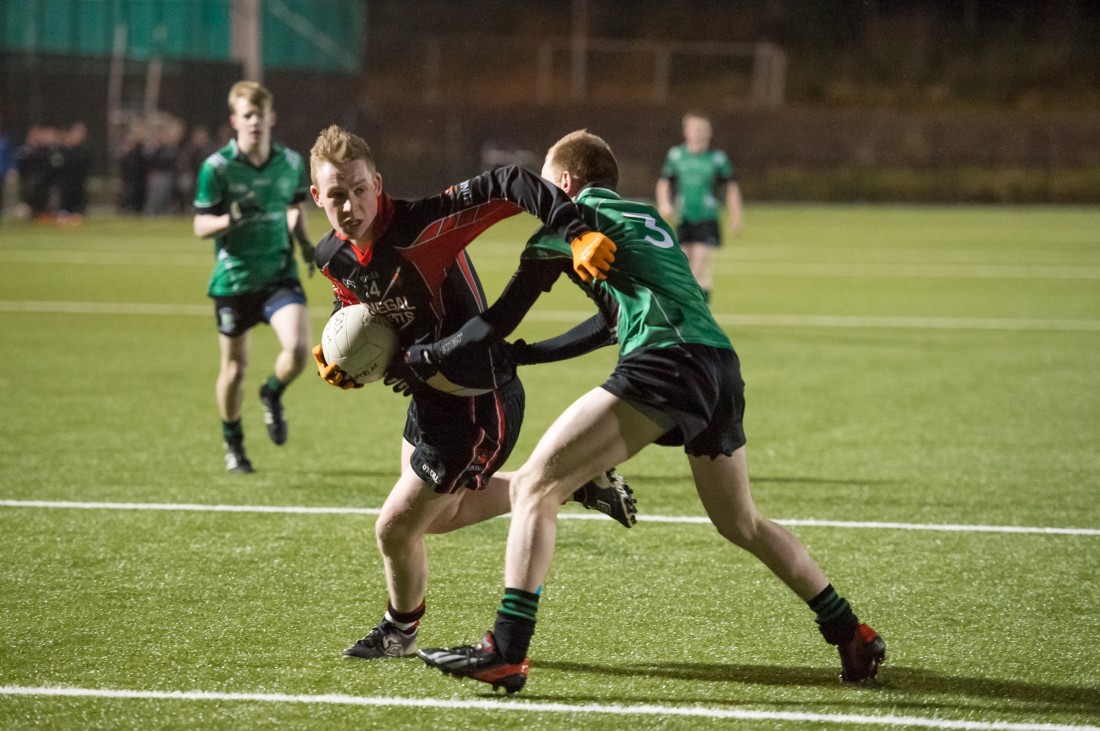 St Eunan’s Sean Hume has his sights on goal during Wednesday night’s semi-final.

BY RYAN FERRY
ST Eunan’s College will face Coláistí Inis Eoghain in the MacLarnon Cup final on St Patrick’s Day after they defeated St Malachy’s Belfast in Wednesday’s semi-final in Garvaghey, Co. Tyrone.
The Letterkenny school produced an excellent performance to win 4-10 to 0-5 and set up an all-Donegal final.
St Eunan’s manager Neil Gordon said his team ‘just clicked’ on the night, and they will now look to win their third MacLarnon title, after previously winning the competition in 2000 and 2007.
“We’re delighted to get over the line. Another MacLarnon final – we’ve waited seven years for this,” said Gordon.
“We’ve won nothing yet, we’re just in the MacLarnon final and hopefully we will give a good account of ourselves.”
St Eunan’s got off to a great start despite playing against the wind, and goals from David Tyrrell and Daire McDaid put them in the ascendancy.
Although they were not as impressive in the second half, they were never in bother and McDaid and Rory Carr added further goals to their tally.
They will now play Coláistí Inis Eoghain in the final, after the amalgamation side beat Patrician Carrickmacross by 4-10 to 2-13 last Sunday.
“We played them (Inishowen) in a challenge match earlier on in the year. They’re a good team and they’re in the final. Any team who is in the last four is bound to be a good team.
“They have a few county panellists, but if we can play to our potential and we can stifle people – we’ll be in with a chance,” said the St Eunan’s manager.
The 1996 MacLarnon final between De la Salle, Ballyshannon and St Eunan’s was played in MacCumhaill Park, but Gordon hopes this year’s final will precede the MacRory Cup final as usual.
“Stick with the original plan. Our gameplan every year is to play Paddy’s day, hopefully win the MacLarnon and arrive back to Letterkenny when everyone is falling out of the local hostelries and there’s a second parade going on. We can join in then.”