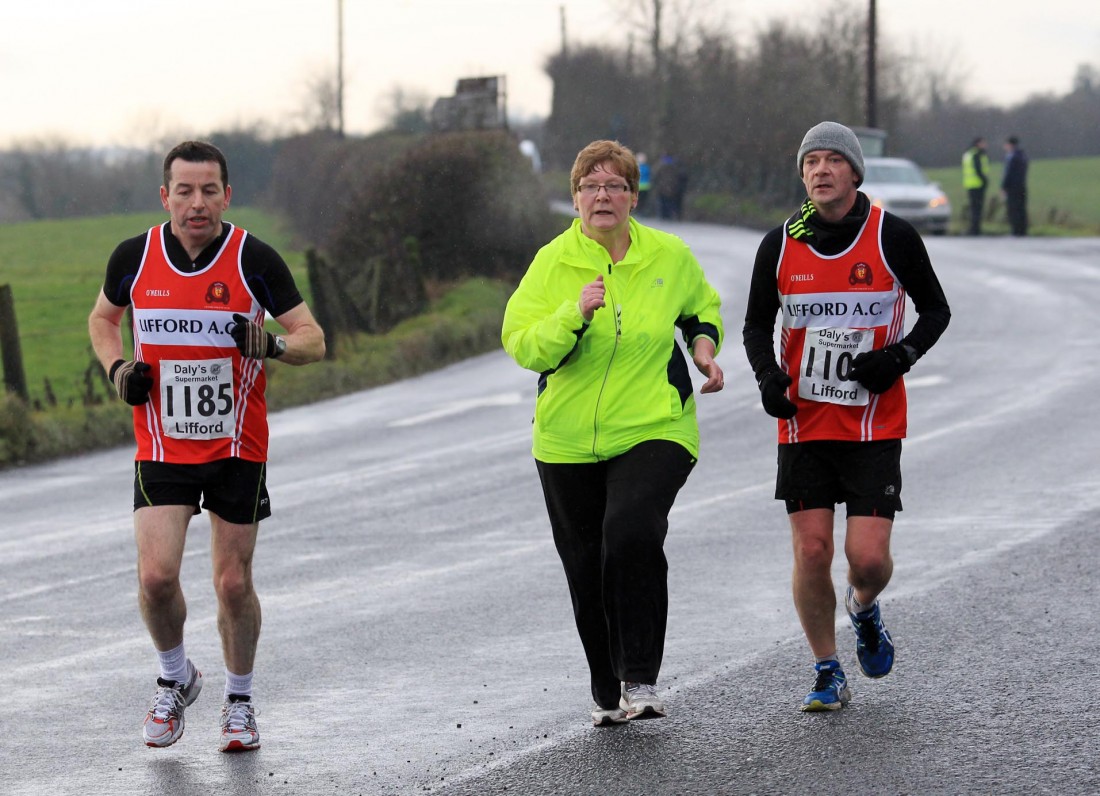 Included in their number was Ballindrait mother of two Joan McHugh, Lifford AC’s Fit4Life Athlete of the Year.

Voted on by all the athletes, Joan was a very popular winner of the award as she epitomises all that is good about running – enjoyment, fulfilling goals, and running to the best of one’s ability every time.

You have to scroll down to the last page of the results sheet from last Sunday’s race to find Joan McHugh’s name, in 300th position, in a time of 40 minutes 38 seconds, but the time is irrelevant – it’s the taking part that counts.

“Little more than two years ago I couldn’t run the length of myself. I was never into sport at school and was forever bringing in notes giving reasons as to why I was unable to do PE,” she explained.

However, with a big birthday looming (her 50th), Joan decided that that was the motivation she needed to shed a few pounds.

“As time goes on you need to do a little bit more to make sure that you stay above the ground rather than under it,” she smiled.

Joan joined the local Fit4Life group in October 2011 where she was put under the expert eye of Danny Burns.

The group met each Monday and Wednesday (it’s now Tuesday and Thursday) at the athletic track in Lifford while they also went for a jog on a Sunday morning.

“If somebody told me to climb Everest next week I would probably take up the challenge. I never had any interest in sport but I wish I had now when I see how well it has worked,” she said.

Twenty years have passed since Joan was first diagnosed with breast cancer. More recently, October 2003, she had another breast cancer scare.

“It’s when things like that happen you realise how precious life really is and how quick something can come along and swipe the feet from under you,” she said.

“I decided it was time to take control of things, time to get out there and live. You have to believe in yourself because, at the end of the day, nobody else really cares if you’re fat, thin, religious or anything like that. We’re all there to get fit and to reach a level of fitness at which we’re comfortable. It’s my own personal journey,” she explained.

“I’ve run about forty 5Ks at this stage and you’ll always find me at the back of the field. I’m not into PBs (personal bests) or trying to catch the person in front of me. It’s all about taking part and the buzz I get from that – meeting people and making new friends,” she said.

Weighing in four stone lighter today than when she started less than two and a half years ago, Joan finds herself in a good place.

“I still enjoy my food. I’ll eat what I want but it may mean an extra lap or two of the track the next day I’m out,” she laughed.

Joan’s enthusiasm has led to her husband Tommy and daughter Julie (30) also joining the Lifford Fit4Life group this year. Her son Martin (19) plays GAA with the local Lifford club and he’s happy to watch on from the sidelines – for the time being at least.
“I’m healthy and well and I enjoy every minute of it. As a family we’ve all realised how important it is to keep fit. Sure what else would you be at,” she said.

Joan runs many of the 5K’s on the race circuit and, if Sunday’s race is anything to go by, she’s one of the most popular competitors and as she approached the finish line in St Johnson on Sunday she was cheered home by athletes and spectators alike.

The final two races in the series take place in Raphoe and Lifford and Joan has already pre-entered both.

Joan McHugh is an inspiration to the many, many more women who have come the right side of illness or who would love to run a 5K.

“All you need is a good, comfortable pair of runners. As my mum used to say, if you’re feet are okay, you’re okay. I’ve not picked up an injuries since I started but maybe that’s because I’ not running fast enough. Slow and easy – that’s my mantra,” she said.

Fit 4 Life is a programme for runners, joggers and walkers, to help them get motivated and get fit. There are a number of organised training and advice groups throughout the county.