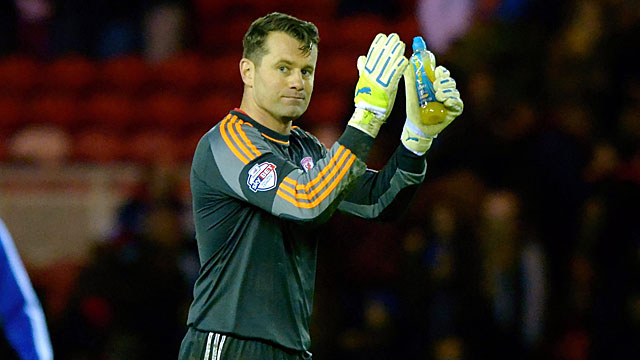 Shay Given applauds fans at The Riverside Stadium.

SHAY Given sprinkled some of his old star dust on the Riverside Stadium as Middlesbrough continued their march up the Championship table.

The Liffordman kept his sixth clean sheet for ‘Boro in their 1-0 win over Charlton Athletic, which moves them into ninth and within five points of a play-off spot.

Right at the end, Given produced a stunning save from Dale Stephens’ blistering shot, a stop that had the Riverside rising to acclaim the 37-year old, watched by Republic of Ireland assistant manager Roy Keane, adding fuel to the speculation that the veteran goalkeeper could be set to add to his 125 international caps.

Former Middlesbrough and Ireland player Bernie Slavin tweeted: “Roy did not stay until the end to witness Shays heroics, I had chat with him on way out 20 mins before end.”

While Ireland don’t begin their Euro 2016 qualifiers until the autumn, new manager Martin O’Neill has been keeping tabs on Given – and with Keane watching Given keep another clean sheet he could get a recall.

“He might have been half-way down the A1 when I made that safe, it was so late on in the game,” Given laughed.

Given is on loan to Middlesbrough from Aston Villa until the end of February and is enjoying his time with the Championship outfit.

He said: “We’re defending as a unit. We think that, if we can keep clean sheets, we will score goals. We should have got a second, and maybe even a third, but their ‘keeper made some good saves.

“It wasn’t a great game. We can play better, but sometimes in the Championship you’ve got to grind the results out and thankfully we hung on and I made the save when I had to.”

Given recently made his 600th club appearance in English football and has become only the sixth player to have played for Sunderland, Newcastle and Middlesbrough.

He said: “I’m back playing and that’s all I want to do. I’m enjoying my time here. With my previous Newcastle and Sunderland connections, they might have been swayed either way, but they give you support here if you perform on the pitch.”

Next weekend, ‘Boro play high-flying Leicester City, whose sub ‘keeper is Ramelton native Conrad Logan. Given and Middlesbrough are high in confidence.

Given said: “It’s a huge result. Leicester are flying and it will be a difficult game next weekend. It was important to win this one and we’ll look forward to next week.”

This was their fifth win in six games and manager Aitor Karanka hailed Given following the game.

“He is very important for us,” he said. “Shay is first of all a very good person and a very good professional and I think he’s improving with age.
“Someone told me Roy Keane was here watching him and I’m very happy for Shay. I’ve only been working with him for two months but I always want to have a keeper like him.”