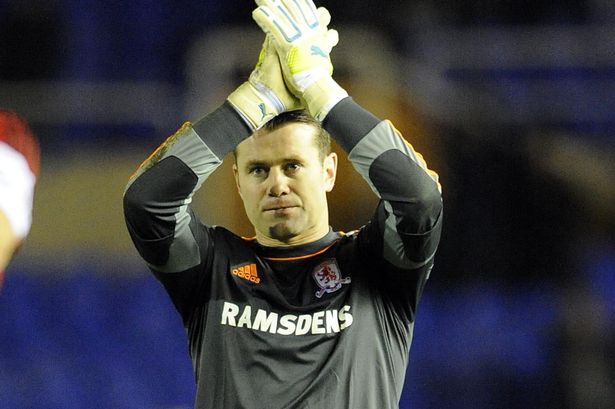 SHAY Given is hoping to get his loan deal at Middlesbrough extended to the end of the season.

The 37-year old Lifford native is currently on loan to the Championship club from Aston Villa until the end of February.

With the transfer window set to close this Friday, Middlesbrough must apply before then for an extension to Given’s term.

“I’ve been delighted to come here and play after 10 months of not being involved at Villa,” said Given.

“It’s nice to be part of a group. The team’s done well, the spirit has been really good and we’re all looking forward to the games ahead.

“My loan’s up at the end of February and the rules are that the deal has to be done by the end of January if I’m going to stay for the rest of the season.

“The fans really seem to have taken to me. They’ve been great. With my previous Newcastle and Sunderland connections, it could have swayed either way.

“At Boro I think these are fans who give you total support if you do it on the pitch, and that’s all I have ever done at every club I’ve been at. The fans can see that every time I play.”

Given has been touted for a possible return to international footabll. He announced his retirement following Euro 2012 having won 125 caps for the Republic of Ireland, but speculation has risen of late that he could be set for a recall by new manager Martin O’Neill.

Roy Keane, O’Neill’s assistant, watched Given perform heroics last weekend against Charlton Athletic and the Donegalman has been in superb form at the Riverside Stadium.

Although ‘Boro were beaten 2-0 by table toppers Leicester City on Saturday, Given was again ‘Boro’s best player and saved a penalty from David Nugent in the second half.

With Jamie Vardy and Ritchie De Laet on target, Leicester kept up their excellent form with Given and Middlesbrough aiming to get back on track on Tuesday night when they welcome Wigan Athletic to the Riverside.