Advertisement
HomeSportSoccerShaun McGowan: “I had to question myself…I feel as if I have a point to prove”
Advertisement 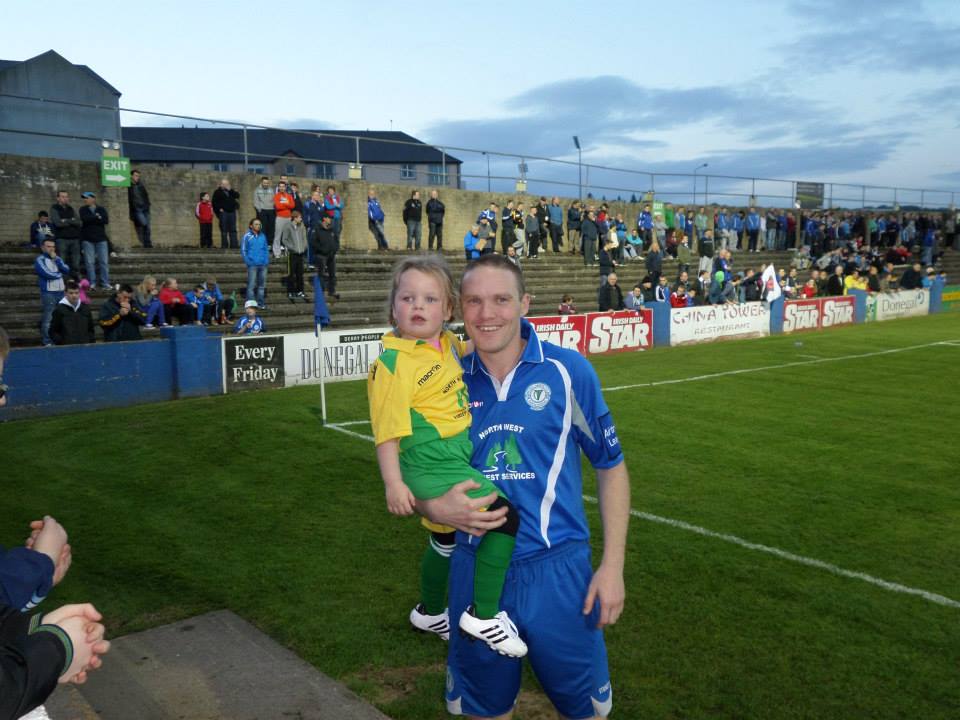 Shaun McGowan, with his daughter Katie-Marie at Finn Park.

OFFERS came from elsewhere that were, to say the least, tempting, but when it came to the crunch Shaun McGowan just couldn’t force himself to put his name on the books of another club bar Finn Harps.

On Monday evening the 29-year old officially signed on the dotted line with his hometown club.

He had been playing with St Pat’s in Castlederg in the Fermanagh and Western League over the last couple of months, ‘just to keep ticking over’, but last Saturday he returned to training with Harps.

There were senior clubs and those of the intermediate variety who had dangled lucrative carrots before him. Home was where the heart rested, though.

Early in the 2012 campaign he returned to the club having been with Kildrum Tigers since his contract at Finn Park was cancelled in 2010.

“I was really happy in my first year back at the club, but last year was a disappointment,” he says.

“I had to question myself on a number of occasions on a lot of different aspects. We let things slide last year. The team probably took advantage of some things last year when we should have been more professional.

“After last year, I feel as if I have a point to prove. Everyone is the same, I think. No-one can hold their hand up and say they were happy with last season.”

McGowan found himself at the centre of controversy last season. Along with Mark Forker, Paul McVeigh and James Doherty he went off to play in a seven-a-side competition on Arranmore Island.

The four – subsequently dubbed ‘The Arranmore Four’ – were summonsed by Peter Hutton to a meeting on the Monday night and handed a two-week suspension. At the time, Hutton said he was ‘fuming’.

“All players were warned at the start of the season that they were not permitted to play in summer cups or GAA or any other sporting activity because of the risk of them picking up an injury,” Hutton told the media that week.

“After telling them and then texting them as back-up on Friday night, I felt the players were well warned and aware there would be repercussions.”

“The whole thing could have been handled better,” he says.

“Things were said about it and people spoke about things that just weren’t true. We never got a text to say not to play. We got a text after the tournament.

“The suspension was way over the top. A fine would have sufficed. We hadn’t missed training and we went out to play in a tournament that we’d won the year before.”

McGowan got his place back in the team and has now played a total of 225 games for the club he supported as a boy.

“I reached the 200 mark last year…some milestone that is.”

His passion for the club runs deep.

A programme vendor, season ticket holder and a vervant follower of the club, home and away, the manner of the season’s turnaround last year, from promising start to a dead-rubber ending saved only by a run to an FAI Cup quarter-final.

When they beat Mervue United in May, they were second in the table, well poised for an assault on promotion. By the time they played Mervue again, they’d gone a whole round of games without a win.

“We’ve had so many false dawns at Finn Harps over the years and last year was the same,” he says.

“We had a good pre-season and we started the season well. Everything was going in the right direction and then – bang!

“After a couple of bad results, the gym work was gone because of a lack of finances. A few things were let go, but I think maybe someone should have taken a stand and just said: ‘No, we need this’.

“Maybe the easy option was taken after two bad results when things came to a head. I do think you’d have seen a different story if we’d kept up the stuff we’d been doing early in the season.” 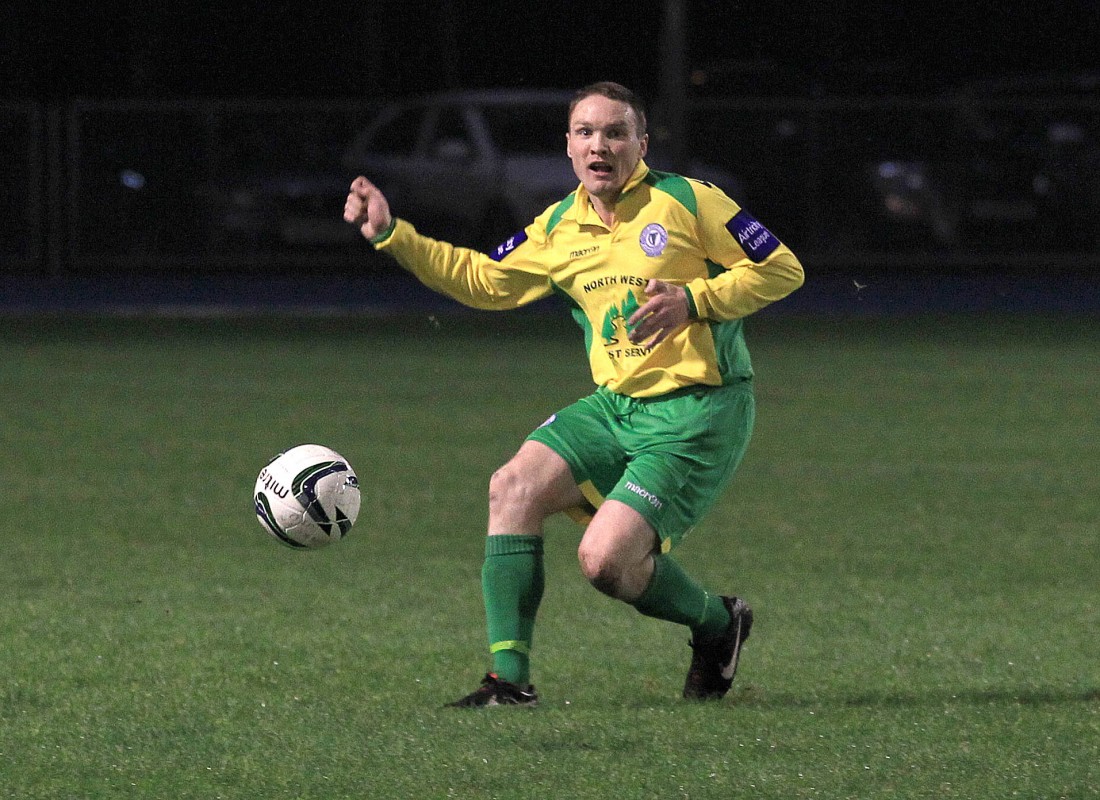 Shaun McGowan makes the pass for Finn Harps during Wednesday’s friendly with Drumkeen.

Under new manager Ollie Horgan, McGowan was the latest of the experienced batch to be retained with Damian McNulty, Keith Cowan, Michael Funston, Ciaran Coll and captain Kevin McHugh among those who are back for another go.

“There is more than enough talent in that dressing room,” McGowan says.

“We need to be more consistent, not this craic of one good result and three bad. The Cup run showed that we’re capable.

“We got to the quarter-final and took Drogheda United to a replay. The season really would have dragged out if it wasn’t for that.

“As a fan or as a player I don’t remember too many seasons when Harps weren’t playing for anything in the run-in, at whatever end of the table. The Cup run kept the season alive.

“In football you go into runs and we got into one where we just couldn’t win a match. It just took us too long to turn that around.”

Horgan has obtained the services of Optimal Fitness in Letterkenny and nutritionist Therese Laverty, something McGowan hopes will see them forge a professional approach for the new campaign.

He says: “From chatting to Ollie, he seems to want a togetherness in there. He’ll want to instill a fight in the team, will want us up for the battle. We all need to be going in the one direction.

“The senior players, like myself, will need to have a more hands-on role, in talking to the younger lads and advising them. Most of the senior players have been retained and that was very important.”

McGowan first signed with Finn Harps in 2001 and spent his early years with the Reserves and the Under-21s. It was in November 2003, in a scoreless draw against Cobh Ramblers at St Colman’s Park, that he made his first-team debut.

In graduating to the senior team, he followed in the footsteps of his father, Sean ‘Wizard’.

Following the departure of Hutton, McGowan senior took the baton for the final game of the season in Salthill and had thrown his CV into the succession race.

When the white smoke billowed, it was the surprise name of Horgan that circled.

He’s looking forward to working with Horgan, but there’s a nagging piece of frustration surrounding the whole process.

“I was very disappointed the way dad was treated,” McGowan junior says.

“I’m not saying he should have got the job, but it’s the way it was all handled.

“The man has given forty years service to Finn Harps and no-one even bothered to lift the phone and call him. Ollie got the job and he’s been working very hard.

“I’m not disputing that or saying dad should have been in ahead of him. But after all those years of services, surely the least he could have expected was to be afforded a phonecall to say: ‘Thanks’.”

The McGowan bloodlines continue to live the Harps ways.

Daughter Katie-Marie is four now – and one of the reasons the powerful midfielder has decided to return to the club.

“I want her to see me play senior football for Finn Harps,” he says.

“The family is steeped in the club and always has been. She has been mascot in the past and it’d be great for her to go to properly see her daddy play for Harps, in games that she might remember.

“I always wanted to come back here.

“I grew up at Finn Harps and I’ve always been a part of the club. Even when I was away I was still the same.