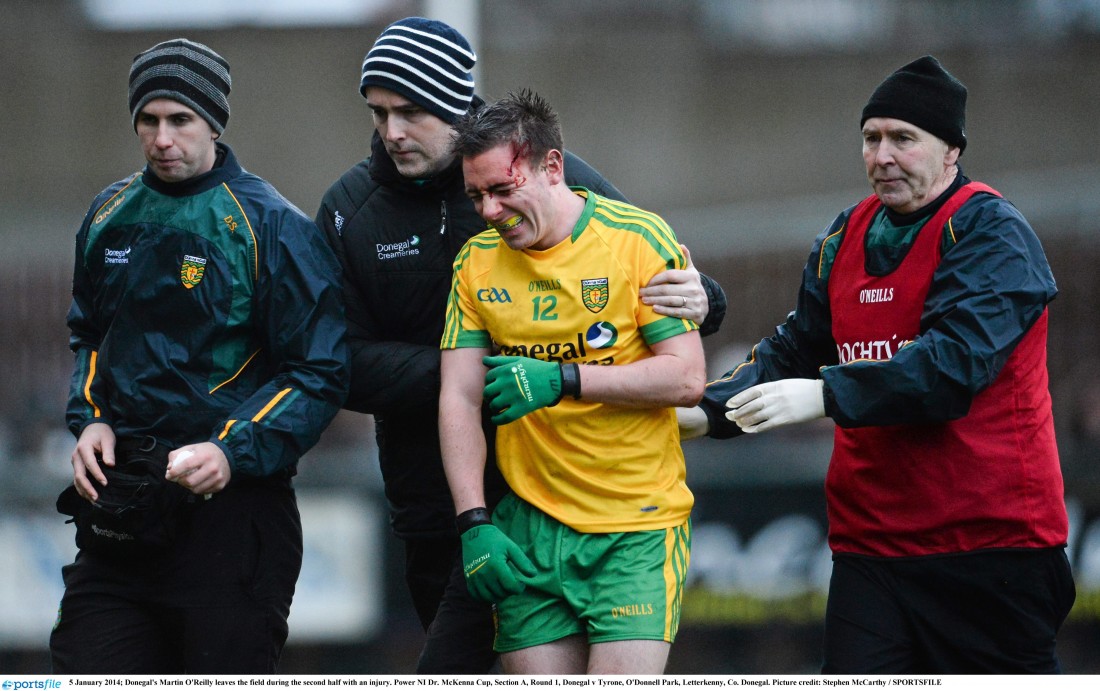 Martin O’Reilly leaves the field during the second half of Sunday’s game against Tyrone with an injury.

THE sight of seasoned campaigners returning to fitness this week was a real boost to Jim McGuinness and Donegal.

Neil Gallagher and David Walsh may even see some small semblance of game time on Sunday when Donegal take on Armagh at the Athletic Grounds in their second game of the Dr McKenna Cup (throw-in, 2pm).

Gallagher has been troubled by a knee injury of late, but the Glenswilly midfielder could be ready for around twenty minutes of action this weekend, while Walsh is also a possibility having recovered from a hernia.

“That is a very good boost,” McGuinness told the Donegal News this week.

“We were only just putting them in and out of games, but that is very good four weeks away from the League.”

The Donegal boss described Tuesday as having been ‘a very good night’ with Christy Toye also taking a large part in the action. The St Michael’s man sat out Donegal’s 2013 campaign but is inching ever close to a return and the same is true of Karl Lacey, who has a slight hamstring injury.

McGuinness said: “They are edging closer and that’s very important. They are all huge players for us – and seeing them creeping back in has been excellent for the squad.

“The positive is that those boys are getting very close after extensive rehab.”

That said, numbers remain thin on the ground ahead of Sunday’s game in Armagh.

Martin O’Reilly is definitely out of the reckoning after the Sean MacCumhaills man spent Sunday night in Letterkenny General Hospital after suffering concussion during the defeat by Tyrone. A head wound, couple with concussion, rules him out of contention.

There is a possibility that those who don’t see action in Armagh could be included for Wednesday’s final group game against Queen’s in Ballybofey.

McGuinness said: “It’s a juggling match in terms of getting it right.

“We will see what we have available, but we are very limited.”

Sunday is a big day for 2012 All-Star defender Frank McGlynn, with the Glenfin man set to make his 100th Donegal appearance, becoming the 38th player to reach the century. McGuinness was full of praise for the 27-year old.

The Donegal manager said: “No-one deserves it more than Frank. In terms of football ability, he is top class. His training is exemplary, his dedication is exemplary and it’s the same with the way that he conducts himself. He is a pleasure to coach and to work with. He is a very intelligent footballer, one of the most intelligent that I know.”