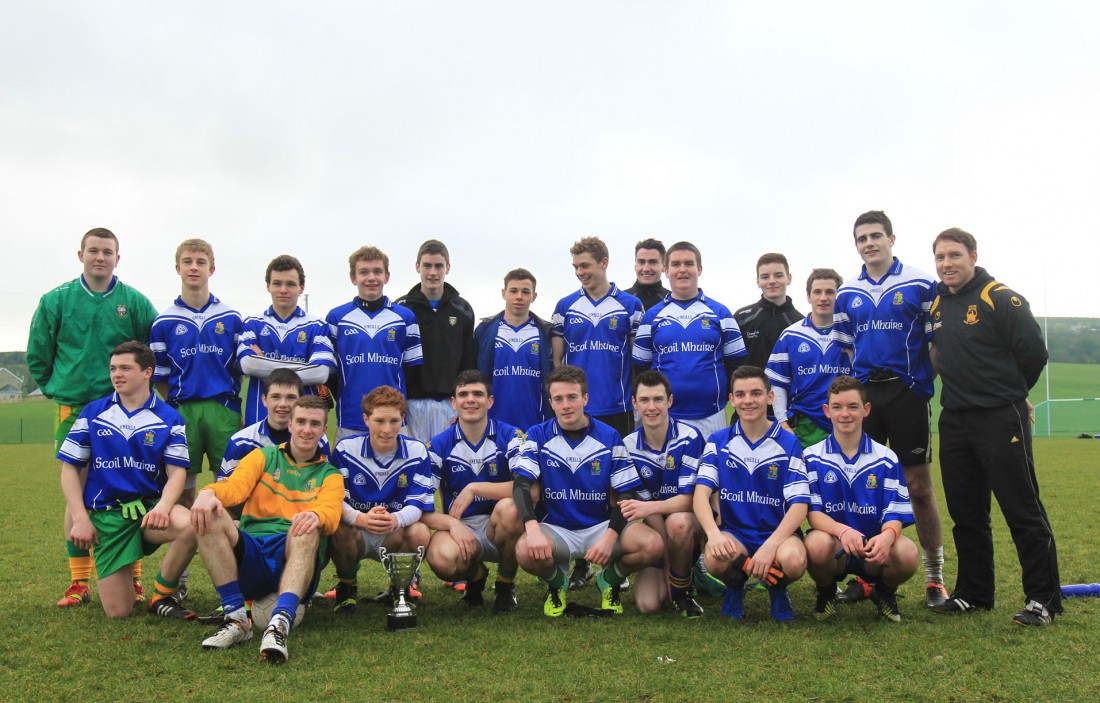 Scoil Mhuire Buncrana, winners of the Senior B Schools Championship.

By Chris McNulty in Convoy

WHEN all seemed lost, Scoil Mhuire, Buncrana pulled the burning embers from the fire to steal victory from under the noses of Magh Ene, Bundoran in Thursday’s Senior B final in Convoy.

The silverware seemed copper-fastened for the south Donegal school, with Scoil Mhuire down to thirteen men.

Mark Coyle was booked for the second time in the 40th minute and, twelve minutes later, Shane McLaughlin followed.

McLaughlin was shown a straight red card for the challenge on Darragh Elliot that left the Bundoran forward in considerable distress with a knee injury after being helped from the field.

A goal by Cian McEniff eight minutes into the second half had ignited the Magh Ene charge – but Scoil Mhuire came good again at just the right time.

Georgie Kelly brought them to within a point before the crucial score arrived three minutes from the end.

Having played the full 70 minutes for the Donegal seniors the previous night against Queen’s in the McKenna Cup, Darach O’Connor was a fatigued figure yesterday – but it was the diminutive forward who engineered the opening.

Kelly curled over his second point and O’Connor had the last say when he landed a superb point from out the left to seal the win.

In added time, Jamie Brennan fired over a free for his ninth point of a game in which he demonstrated why he is rated so highly.

It was largely down to Brennan that Bundoran were in the mix at all.

Brennan inspired a comeback in the first half that had the tie delicately poised at the interval.

Four times in the final six minutes of the half Brennan pointed, the highlight being the 27th minute score to polish off a fine team move that saw Elliot magnificently win possession out ahead of his man.

Elliot himself might have had a goal in the eleventh minute, but goalkeeper Jamie Barr thwarted his advances with a brave stop.

Magh Ene had begun brightly. John Campbell hit a free in the opening minute for Scoil Mhuire, but Brennan hit a quick-fire brace to hand the initiative to Bundoran.

Cian McEniff extended the lead, but Scoil Mhuire came roaring back. Caolan McGonagle went on one of the surging runs from deep that have become a trademark and powerfully blasted past Pender, who got a touch but couldn’t keep it out.

Campbell (2), McGonagle and O’Connor tacked on points to open up a five-point lead, only for Brennan to haul his men from the brink.

Magh Ene led for only the second time when, in the 38th minute, McEniff tapped home after Scoil Mhuire ‘keeper Barr saved superbly to beat away Brennan’s power-packed shot.

Right then came support for the notion of not throwing in the towel as McHugh netted and Scoil Mhuire toasted the arrival of silverware.