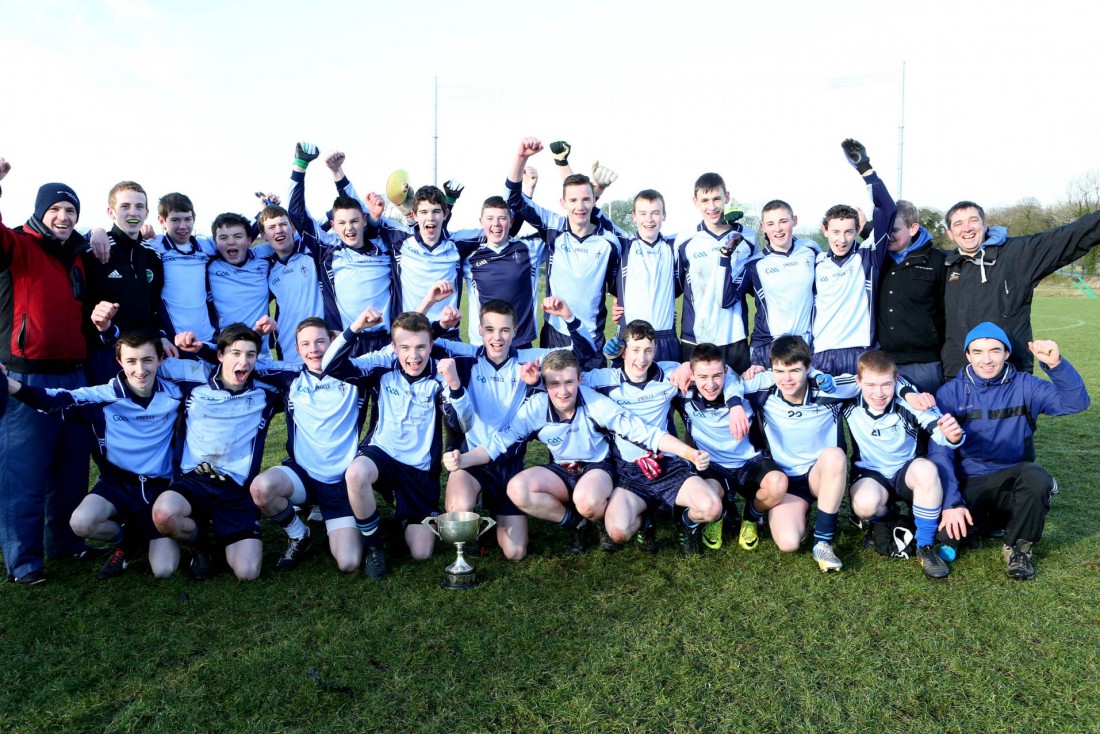 PCC, Falcarragh won their first Under-16 Schools title since 2005/06 as late goals from Jason McGee and Michael Langan sealed an emphatic win over St Columba’s Stranorlar.

McGee, the team’s captain, struck gold in the 54th minute. Latching onto a long ball from Micheál Mulhern, McGee showed all the soccer prowess that has flashed upon Nottingham Forest’s radar to round goalkeeper Carl Dunne and tuck neatly to the net.

PCC were deserving winners in a largely one-sided game and would have been comfortable victors even without those two late strikes.

That said, they led by just two points at half-time, but St Columba’s scored just once in each half and when PCC turned the screw they began to assert their worth.

“The boys were getting frustrated, but we just told them to stick at it. Thankfully we came through and hit a purple patch to win it.”

Momentarily, Jack Blake thought he had teed up a contest when he pulled the arrears back to just a point early in the second half.

However, Dylan Doherty, who was at the controls for much of the way for PCC, restored the two-point lead with a score that inspired his side.

Langan mightn’t have been involved as much as his team wanted, but when he did get the ball he was in deadly form.

A quick-fire brace, the second of them an excellent score from distance, paved the way in the 43rd minute.

Doherty popped up again to make it a five-point game before Langan broke clear to send his side 0-8 to 0-2 in front.

PCC led from the twelfth minute when  McGee steered over and, almost instantly, Langan doubled the advantage. St Michael’s teenager Langan tapped over a free to stretch the margin a little further.

It was a first half of little goal-mouth incident though, with St Columba’s managing only one score in the diet period – a 23rd minute free by midfielder Conor Dalton.

But for ‘keeper Dunne, St Columba’s could have been gazing up quite the mountain for the second half. However, Dunne got out to save superbly after Ciaran McGinley cut a swathe through the St Columba’s rearguard in the 25th minute.

A goal then and PCC would surely have been in a commanding position, but at the short whistle they led by just two, 0-3 to 0-1.