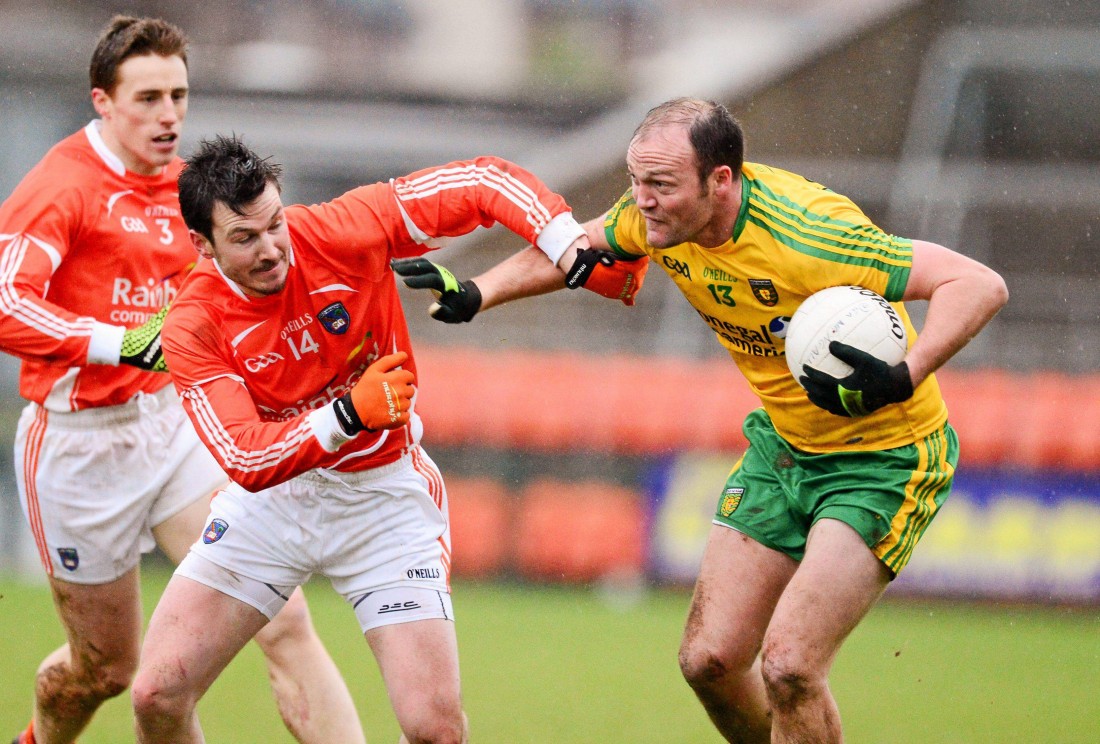 Report by Chris McNulty at The Athletic Grounds

THESE games are never the most pleasing on the eye, but there was plenty to admire about the late comeback to secure Donegal’s first win of 2014 in Armagh.

A volley of scores at the back end of the first half had helped Armagh to a lead they held through the second half.

That was until a Colm McFadden goal woke Donegal for a late purple patch that secured a win over their old rivals.

Michael Murphy and Odhrán MacNiallais got a brace each as Donegal summonsed the perfect response to illicit the group’s first competitive win since their All-Ireland qualifier win over Laois in July.

McFadden’s goal was borne out of a sheer refusal to accept Armagh’s commendable resistance.

Darach O’Connor worked the chance out the left with a clever pass inside. McFadden’s neat side-stepped opened up an opportunity, but goalkeeper Philip McEvoy got down to save. Andy Mallon twice made a goal-line stop, but when McFadden powered in again there was no stopping the St Michael’s man from hammering home.

They’d been four behind and looking like they were heading for the McKenna Cup’s green exit sign, but that goal keeps ajar the door to the next phase – though advancement will likely require a landslide win over Queen’s in Ballybofey on Wednesday night.

MacNiallais was involved in the panel throughout 2013, but was very much a fringe member of the plans. Now, though, the 21-year old Gaoth Dobhair native is aiming to take the next step – and he did his chances no harm here.

He was at the centre of things late in the day. First, he popped off a smart pass to tee up Murphy for the equalising point in the 67th minute. MacNiallais then shot Donegal into the lead, the first time they had been ahead since the 24th minute, after taking receipt of a ball by Frank McGlynn, on a landmark day for the Glenfin man who was making his 100th senior appearance in the county’s colours.

As he tends to do these days, Murphy provided the game’s memorable moment.

Between the markings of the 13 and 20-metre lines right on the white of the left-hand touchline, Donegal were awarded a free. The Donegal skipper planted the ball on the ground and magnificently swung over a point that was, if it were needed at this stage, a reminder of his class.

While Robbie Tasker kept Armagh’s hopes alive, Donegal sensed victory – and Neil Gallagher won the kick-out to send MacNiallais on his way to bagging the clinching score of what was a positive day at the office for those attired in green and gold.

There was a considerable boost in the form of a start for the 2012 Footballer of the Year, Karl Lacey, whose inclusion in the half-back line was one of four changes made by Jim McGuinness.

Goalkeeper Michael Boyle was in for his first appearance since 2011, with Thomas McKinley and Matthew Smyth also drafted in to start with the squad also heralding the returns of Gallagher, David Walsh and Neil McGee, who all made appearances off the bench.

Donegal trailed 0-7 to 0-3 at the interval, prompting McGuinness into calling for McGee and Walsh to be deployed for part two.

Within four minutes of the re-start, Walsh had his name on the scoreboard following yet more industry by the lively O’Connor, after Murphy had converted a free.

Tasker yielded another few moments of magic by Armagh. Paul Grimley’s side looked to have taken a firm hold of the contest when Stefan Campbell’s brilliant score was followed by Eugene McVerry getting inside Declan Walsh to open up a five-point margin, with Donegal relieved that he hadn’t continued his march to goal.

Within thirty seconds of his introduction, Gary McFadden stemmed the flow. Intercepting a pass out of the Armagh rearguard with his first touch, he took a return from Leon Thompson to slot over a score with his second.

Just twenty-four hours after flying back from Flordia – where he had been with the Crossmaglen team on holiday – Jamie Clarke was sprung by Grimley, but the jet-lagged hitman wasn’t able to keep Armagh ahead, as Donegal pounced for the win.

Playing against a strong breeze in the opening period, Donegal were the happier of the two for long periods of the first 35 minutes, although it was certainly Armagh who left smiling at the break.

O’Connor opened the scoring after 80 seconds, the Buncrana man coolly clipping over after McFadden’s curling shot was rescued by Murphy. McFadden doubled the lead from a free, but it would be another nineteen minutes before they troubled the umpires, Murphy scoring a free to restore their lead after two superb points from Campbell and Ethan Rafferty.

Midfielder Rafferty was among Armagh’s leading lights, particularly in his role as the ball winner at midfield.

From just two of their own twelve kick-outs in the first half did Donegal win possession, neither of them clean catches, but that should not be attributed to Boyle, for conditions and Armagh’s aerial dominance were more mitigating factors – and the ratio improved considerably with Gallagher in the mix.

There was a worrying seven minutes, or so, at the end of the opening half, as Rafferty (’45), Mark Shileds, Oisin MacÍomhair, Stefan Forker and Tasker all raised white flags, the scores of Shields, MacÍomhair and Forker, in particular, of outstanding quality.

Were it not for their wastefulness, Armagh could have had a greater advantage – and they would rue the lack of a ruthless edge once Donegal managed to find a way back late on.