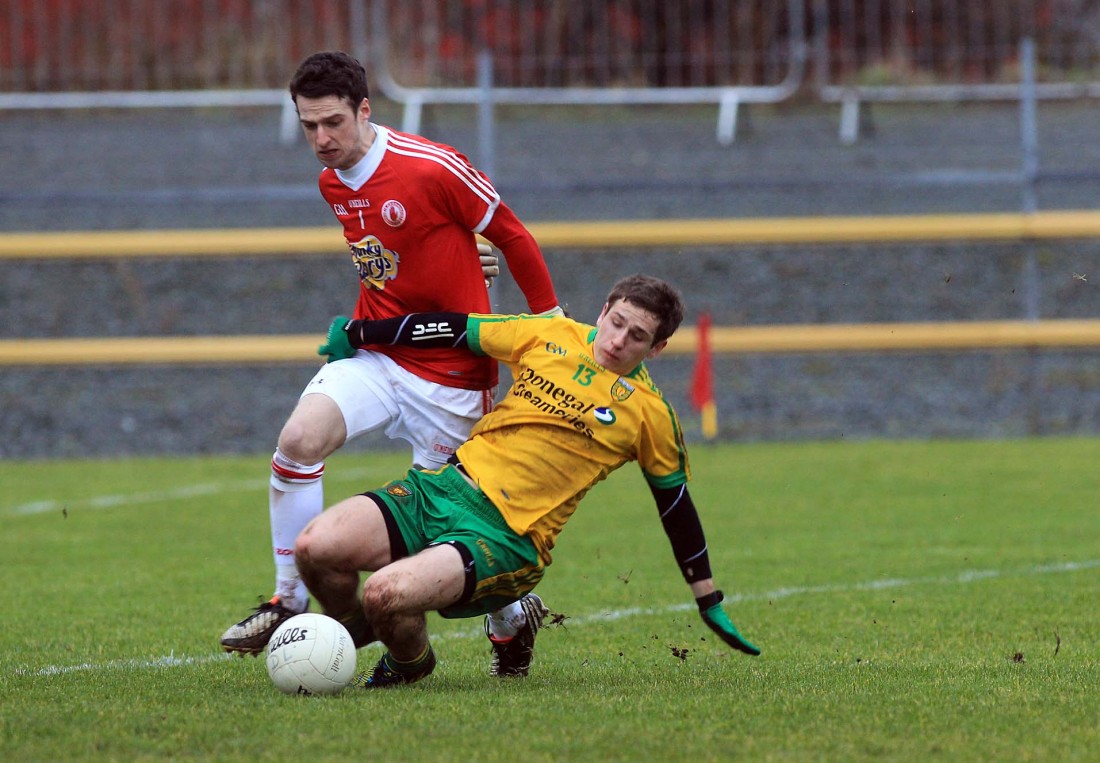 Darach O’Connor is fouled by Tyrone ‘keeper Niall Morgan for a penalty in the first half.

TYRONE outplayed Donegal in the second half at O’Donnell Park to score an impressive season-opening victory.

The understrength Red Hands, with only Conor Clarke, Ciaran McGinley and Mattie Donnelly included from the side that lost the All-Ireland semi-final to Mayo, outscored Donegal by eight points to two in the second half to claim a deserved win.

Donegal and Jim McGuinness have opeted to go for strength in January for the first time and the Tir Chonaill men had eight of their 2012 All-Ireland final side in from the off.

With Michael Murphy’s 31st minute goal having them ahead by three at half-time, the smart money would have been hedged on the home side kicking on after the re-start.

However, they scored just two points after the break – nothing in the final eighteen minutes when Tyrone, spurred by the returned Niall Morgan, prised the win.

Morgan hit two splendid frees in the closing stages having popped over a ’45 earlier in the half, to sit neatly alongside his first-half penalty save from Michael Murphy.

Had Murphy rattled the net from the 22nd minute spot-kick, Tyrone could have buckled with a six-point deficit.

As it was, though, they remained in touch and they pressed the gas once Donegal lost influential midfielder Rory Kavanagh to the only black card of the contest twelve minutes from the end.

Kavanagh was penalised for impeding Tiarnan McCann’s run and Morgan slotted over the free to put Tyrone ahead for the first time since the 20th minute.

Another Morgan free extended the lead and sub Peter Hughes sealed the win three minutes from the end.

It was a strong Donegal team sent out by Jim McGuinness for 2014’s currtain raiser; a selection that contained just one debutant, the 2013 minor captain Darach O’Connor from Buncrana.

O’Connor was the man fouled by Morgan for the penalty. The nifty O’Connor went to ground as the players collided and the referee immediately out-stretched the arms.

Murphy stepped up, but as he had done in the National League encounter at Healy Park last spring, Morgan got down to his right to save from the Donegal captain’s powerful effort.

It was a huge save from Morgan, but there was no stopping Murphy nine minutes later.

The Glenswilly man drilled emphatically to the net with an effort that rocketed into the top right-hand corner of Morgan’s net. It’s not a goal that Tyrone defender Aidan McCrory will be rushing to view again after the Errigal Ciaran man was badly caught in two minds.

McCrory dallied and Murphy was allowed to power through and smash to the net.

Tyrone opened well with a pair of Ronan O’Neill scores getting them off the mark with Donegal having to wait until the 15th minute for Colm McFadden to get their opening point.

Murphy drew them level only for Shay McGuigan to restore Tyrone’s lead. McGuigan was one of three debutants listed by Harte, becoming the fourth brother of the famous Ardboe family of the legendary Frank McGuigan to don the red and white. Previously his brothers Frank jnr, Tommy and Brian have won All-Ireland medals.

Murphy drilled over a free and the sides were level again before the Donegal full-forward was denied by Morgan. Before he made ammends with his goal, team-mates Eamon McGee and McFadden popped Donegal into a two-point lead.

His blistering goal had Donegal three up at the short whistle, with McCann and Paddy McNiece on the mark for Tyrone.

Mickey Harte went for a shake-up at the interval, with Peter Hughes and Kevin Gallagher thrown in – and both contributed handomsely to their second-half revival.

Donegal’s distribution let them down for long periods and Tyrone were the calmer outfit during the second period.

McNiece and O’Neill had them within striking distance just after the re-start although Murphy quelled the home fears. Tyrone turned the screw, Morgan coolly swinging over a ’45 and McNiece bagging the leveler in the 43rd minute.

Murphy clipped Donegal in front again after a quickly-taken free by McFadden, but it was to be the hosts’ last score.

It took an excellent finger-tip save from Paul Durcan to keep them in front when he flung himself out to turn Donnelly’s effort round the post. However, his kick-out was intercepted by Donnelly and he fed McNiece for the equaliser.

When Kavanagh walked and Morgan crisply clipped over a point for the lead, the writing was on Donegal’s wall – and McKenna Cup holders Tyrone pressed on for the win.

With Morgan, O’Neill, McGinley, McCann and McNiece all contributing well, Harte will have departed a happy man, but Jim McGuinness didn’t appear too concerned. “It was fits and starts, but you’d expect that for this time of year. It’s part and parcel of thr 5th of January,” the Donegal boss said.