Advertisement
HomeSportGAAPreview: McGuinness has eye on bigger picture ahead of Armagh trip
Advertisement 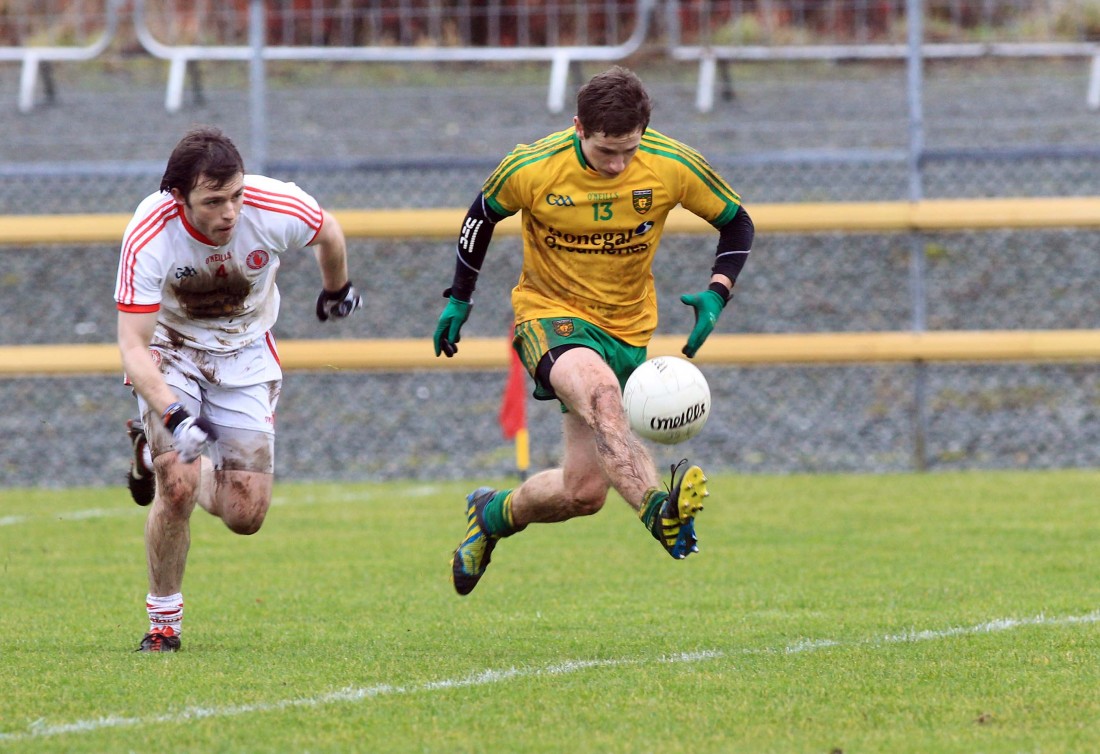 Darach O’Connor of Donegal gets ahead of Barry Tierney of Tyrone in Sunday’s game.

TO stand a chance of making the semi-finals of the Dr McKenna Cup, Donegal will need to defeat Armagh on Sunday – but Jim McGuinness is more concerned about the continued progress of his squad’s walking wounded.

Three weeks out from their National Football League opener away to Laois, the Donegal manager is within touching distance of being able to declare a fully-fit squad.

It seems something of a paradox, then, to suggest that McGuinness is struggling for numbers at the moment, a week on from only having a squad of 21 players to face Tyrone last Sunday in Letterkenny.

Several of McGuinness’ stellar seasoned campaigners are nearing a return, though. For instance, Neil Gallagher and David Walsh are in line to make a return to competitive action this weekend, both having taken a full part in training on what was a very positive session in Castlefin on Tuesday.

The returns of Christy Toye, Neil McGee and Paddy McGrath have also been welcomed, though they may have to wait until Wednesday’s game against Queen’s to get back to action, with the possibility that they may not even be risked and kept until the League, by which time McGuinness aims to shuffle a complete deck of cards.

Mark McHugh played last Sunday for Sligo IT, while Patrick McBrearty remains a couple of weeks off being able to make a return and 2012 Footballer of the Year Karl Lacey is another who is almost ready to be let off the leash again.

“They are edging closer and that’s very important,” McGuinness said of those returning faces.

“They are all huge players for us – and seeing them creeping back in has been excellent for the squad. The positive is that those boys are getting very close after extensive rehab.

“That is a very good boost. We were only just putting them in and out of games, but that is very good four weeks away from the League.”

With that in mind, it is no surprise that McGuinness will press on without calling in any re-enforcements to his squad to bulk it up.

With Michael Boyle, Matthew Smyth, Daniel McLaughlin and Hugh McFadden all having had slight knocks, McGuinness does have only a skeleton panel, but is content with his lot.

“We will see what we have available, but we are very limited,” he said of this weekend’s game.

“We’ve gone this far with what we have so we’ll keep going. The ones that don’t make it for this weekend could make it for Wednesday.

“It’s a juggling match in terms of getting it right.”

Martin O’Reilly, who suffered a head wound and concussion last Sunday – spending a night in hospital as a result – will sit out Sunday’s game, meaning Thomas McKinley or Antoin McFadden are likely to get the nod. Elsewhere the team will run along more or less the same lines as that which was defeated by Tyrone in Letterkenny.

Odhrán MacNiallais and Darach O’Connor will again be given a chance to show their worth.

McGuinness said: “Conditions didn’t really suit Darach, but he acquitted himself well I thought. He played very well and he’s a very game player. Odhrán played very well too. We’re hoping that these lads can become competitive. This is a big chance for them.”

Frank McGlynn will play for the 100th time for the Donegal senior team on Sunday.

McGuinness said: “No-one deserves it more than Frank. In terms of football ability, he is top class. His training is exemplary, his dedication is exemplary and it’s the same with the way that he conducts himself. He is a pleasure to coach and to work with. He is a very intelligent footballer, one of the most intelligent that I know.”

Donegal and Armagh will also clash later in the year in the League. while Sunday reacquaints Donegal with familiar opponents in the Orchard. Paul Grimley is joined by Kieran McGeeney, the former Kildare manager who had a couple of memorable jousts with McGuinness’s Donegal during his time at the Lilywhites, which should add some more intrigue to Sunday’s conest.

McGuinness said: “You want to win every game you play. It’ll be a tough game against Armagh, a very good Armagh team that is. The bottom line is that it will be a really good game and a really good test. That will bring us on as a squad.”

Armagh had ten different scorers in last Sunday’s win over Queen’s, but Grimley wasn’t too pleased with his side.

A Niall McConville goal in the 50th minute helped the Orchard to a comfortable win, but Grimley has demanded more.

“If we can get 10 players to score against Donegal next Sunday, then that will be a bonus,” he said.

“I think we have to take into account that Queen’s were seriously under-strength. Also we created four clear first-half goal chances and fluffed them all. While there were encouraging aspects of this display, we still have much work to do.”