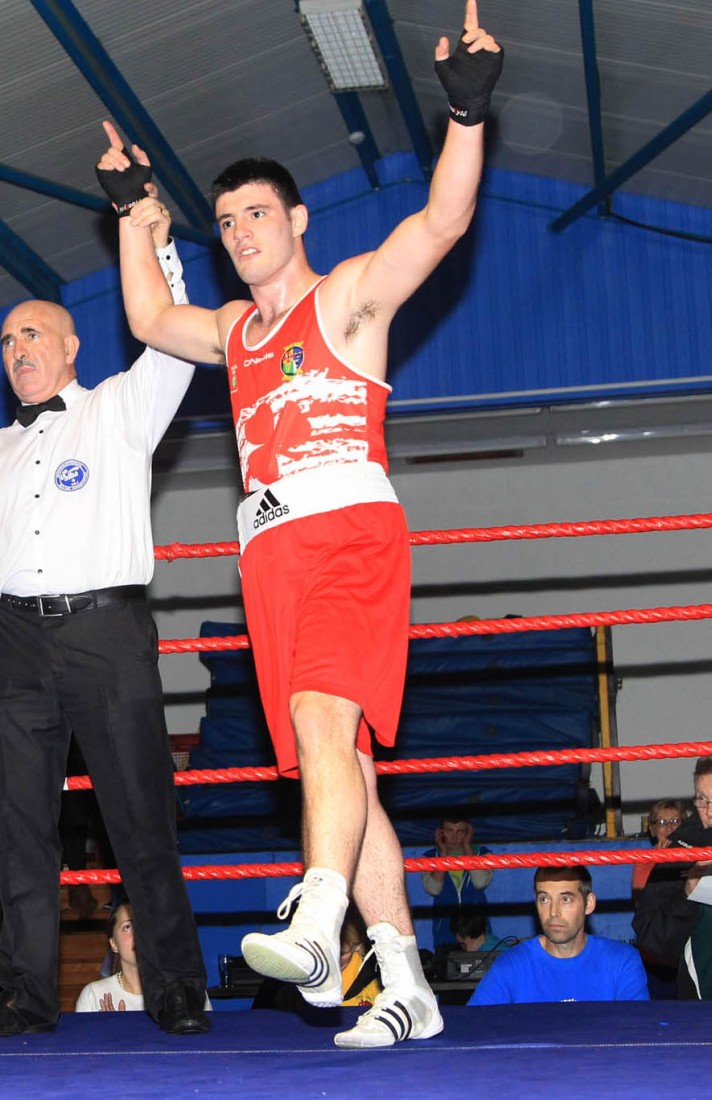 MICHAEL Gallagher, the Finn Valley Amateur Boxing Club’s powerful punching heavyweight, stands on the cusp of his tenth Irish title tonight, Friday, when he lines up in the 91kgs decider at the National Open Youth Championships.

Gallagher is up against Gary Maughan of Cavan in the final after blasting his way to the final in efficient style, even if not at his blistering best.

The seventeen-year old Gallagher, a native of Kinletter, is one of two Donegal boxers in finals action, the other being Carndonagh’s Liam Callaghan.

Last weekend, Gallagher scored a 3-0 win over James Hughes from Ryston. Last year, Gallagher had memorably knocked out Hughes with the first punch of an Irish semi-final, but his opponent was ready this time. And yet Gallagher zoned in for the final with a useful unanimous-decision win to send him back to take prime billing tonight at The National Stadium.

This will be one of the biggest nights for Gallagher on the South Circular Road. It is not just an Irish title that is on the line here.

The Irish Amateur Boxing Association are using the Open Youth Championships as part of their selection process for the AIBA World Men’s and  Women’s Youth Championships in Sofia, Bulgaria in April. Sofia 2014 is the only qualifying event for the Youth Olympic Games to be held in Nanjing, China in August.

So, you see, the doors really could be thrown open by Gallagher with a win tonight.

Gallagher competed at the 2010 European Schoolboy Championships in Anapa and won a bronze medal.

In these Championships, he has not yet dropped a score, winning each of his fights unanimously.

Under Conor Quigley’s tutelage, Gallagher is one of those boxers whose potential could carry him quite a distance with the right effort behind it.

Callaghan is another highly-rated puncher, who competed in the 2013 European Youth Championships in Russia and the 2013 National Youth champion will be aiming to land the title when he squares off to St Paul’s man Brendan Irvine in the final. Irvine comes with a fair pedigree himself and Callaghan will have to be at his best to stand a chance.

Ten male finals are pencilled in for decision, along three female finals in the three Olympic women’s weight categories of flyweight, lightweight and middleweight.

A FEMALE boxing team, made up largely of boxers from Donegal, heads for Swinford, County Mayo tonight, Friday, for a major inter-county tournament in the newly-refurbished Swinford Boxing Club.

The team is led by Carndonagh’s three-time Irish champion Labhaoise Clarke, who represented Ireland in 2013. Her sister, Irish champion Jessica Clarke, is also on the team managed by Raphoe ABC’s Peter O’Donnell.

It is a star-studded team of boxers, who are undergoing training sessions each Sunday from 11am to 1pm in the Raphoe gym.

Female squad training continues on Sunday next from 11-1 in Raphoe.

WEIGH-IN for the Ulster Senior Championships takes place this Sunday, January 26th, at Ring ABC in Derry from 9-10am. Boxing takes place at the Dockers Club, Belfast on Monday, Tuesday and Wednesday night. Finals take place on Friday, January 31, at the Europa Hotel, Belfast.