Advertisement
HomeColumnistsOff The AirOff the Air: Work to be done it would seem
Advertisement 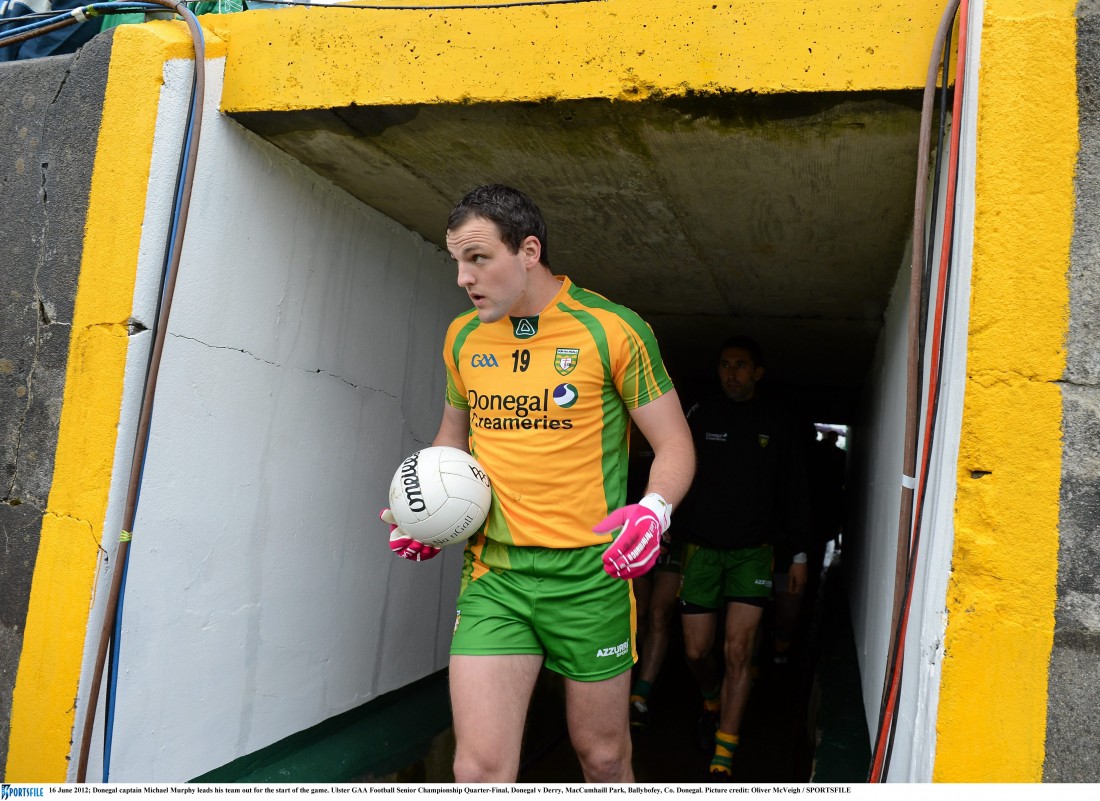 Michael Murphy is ready to lead Donegal into 2014.

THE recently published rankings of the country’s GAA teams makes for interesting reading.
Not surprisingly, the 2013 All Ireland finalists Dublin and Mayo and ranked one and two with Kerry and Tyrone completing the top four. Ulster champions Monaghan are ranked at five, Cork (6) and Donegal are down in seventh spot with Cavan, Meath and Kildare completing the top ten.

There’s not too much wrong with that although Donegal will feel aggrieved to be as low as number seven while I’m surprised to see Cavan as high as eighth position.
Outside the top ten there’s Derry (11), London (12), Down (13) and Galway (14). While they had a great 2013, I don’t think London should be ranked higher than the likes of Derry, Down and Galway.
The other Ulster teams Armagh (19) and Fermanagh (22) are given little hope in 2014 and neither are Sligo way down in 27th spot. I know it’s only someone’s opinion but it’s hard to take that teams like Sligo could be that far down the rankings.

These rankings will quickly become irrelevant of course when the real action starts with the provincial Championship series in May.
Tyrone, in fourth spot, have not been able to make much of an impact in Ulster in recent years due to Donegal’s dominance, while Monaghan (5) still have a lot to prove. Despite winning Ulster last year they were poor once they got as far as Croke Park.
The competitive action gets underway this weekend with the McKenna (Ulster), FBD (Connacht), McGrath (Munster) and O’Byrne Cups (Leinster) taking centre stage.
It means that the more successful counties are in for a long season with the National Football League getting underway on the first weekend of February.
Donegal completed their preparations for the start of the McKenna Cup (at home to Tyrone this Sunday) with a nine point win over Roscommon in Convoy last weekend. All the early indications are that Jim McGuinness has decided to take this year’s competition a lot more seriously than he has done in more recent times.

His plans have been disrupted somewhat however due to injuries and college commitments but with their opening two National League games away to Laois and Galway, McGuinness needs to have his strongest possible squad available for those two games in early February.
The absence of some of his more established players does present an opportunity for others to stake a claim for a regular spot in the starting team. The likes of Dermot ‘Brick’ Molloy, Gary McFadden, Odhran MacNiallais and Hugh McFadden spring to mind in this regard and a few others who might have their sights set on breaking through.
According to the rankings Donegal will, as best, be looking for a quarter final spot in the All Ireland series later this year. The lop-sided nature of the provincial Championships means that all, bar Ulster, should go along predicted lines with Mayo and Galway in Connacht, Kerry and Cork in Munster and Dublin plus either Kildare or Meath in Leinster.
Picking two from Ulster is much trickier although the two teams meeting in O’Donnell Park this Sunday, albeit in a less competitive match, might well be there representing Ulster come the Bank Holiday weekend in August 2014.

Harps need to Reignite
2013 was a difficult year for Finn Harps both on and off the pitch. After a good start to their league campaign they faded badly amid several incidents of player ill discipline which, ultimately, led to the resignation of team manager Peter Hutton shortly before the end of the season.
Following an intensive interview process, Ollie Horgan emerged as his surprise replacement. The surprise was the fact that his name had never been linked with the job until the club confirmed his appointment. Seemingly, this was not his first attempt to take over the hot seat at Finn Park but he impressed the interview panel with his vision for the future.
He’s been busy these past few weeks, resigning a number of last year’s squad and adding a few new faces but he’s a tough task ahead but, being a pragmatist, Ollie already knew that before he applied.
Harps need to be reignited and, hopefully, Ollie is the man to do just that.

Class of 2014 with much to achieve

Donegal has always produced excellent sporting talent at club, county and international level and there’s so much more to look forward to in 2014.
Seamus Coleman has already captained his country and earlier this week his club manager at Everton Roberto Martinez suggested that the Killybegs lad could go on to become one of the greatest full backs ever in the Premier League. One wonders however, how much longer Martinez will remain his club manager.
Jason Quigley’s future seems uncertain. The World silver medallist has had several attractive offers put to him to switch to the professional boxing game and it’s time for those within the amateur ranks to do their best to keep the young Finn Valley man. Ultimately however, Jason will have to make the decision and do what’s best for himself and his family.
Philip Deignan will start the 2014 season riding for Team Sky in America next month while Martin Harley looks to build on the 100 plus winners last season as number one stable jockey for trainer Marco Botti.
Both Brendan Boyce and Mark English have set themselves big goals this year as they prepare themselves for European and World games, and the 2016 Olympics in Brazil.
Others will set targets for themselves in the coming year and, if they get a little luck which is always required no matter how skilful or talented they are, they too could make the breakthrough onto the national and international stage.

Howard Webb is the poster boy for elite Premier League referees. He was the man who took charge of the 2010 World Cup final between Spain and Holland but it was a game he made a mess of, getting many of the big calls wrong.
Last Sunday he was at it again. Taking charge of the big game of the day between Chelsea and Liverpool he failed to send off Samuel Eto’o for a horror tackle of Jordan Henderson early on and then failed to award a penalty after what can best be described as a third man tackle by the Chelsea striker on Luis Suarez in the penalty area. What was of more concern about the penalty incident was that Webb was standing less that ten feet away.
Remarkably, Webb is favourite to go to the World Cup finals in Brazil again this summer. It’s almost funny except that it’s far too serious. Howard Webb doesn’t seem to get it. The game’s not about him but about applying the rules as set out. Too many big calls and decisions have been costing teams too many points and it’s simply not good enough.