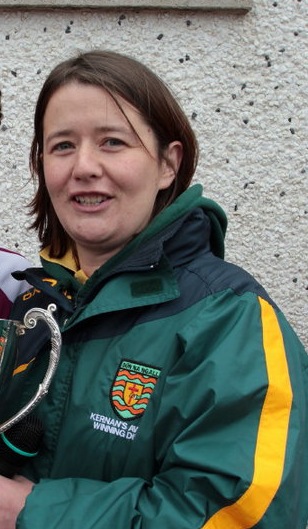 MAGGIE Foy is aiming to guide the Donegal senior ladies back up the ladder again in 2014.

The Letterkenny Gaels clubwoman has been appointed as the manager of the ladies team for the new campaign, which gets underway on February 2nd with a League game away to Laois.

She succeeds Hughie Molloy in the position – and is the first female to be appointed to manage the team.

“I’m looking forward to the season and what it has to offer,” she told the Donegal News.

“We have introduced a lot of new players. We have a lot of new, young, players in the panel, a total of fourteen new players, some of whom have never played county football before but who have been flying at club level.

“We have a panel of forty at the moment, but that will be cut around the end of March. It’s been very good. There is a good buzz around at training.”

Among those on her backroom team are Anne-Marie Gibbons, Katie Foy and Dermot Foy – and the new manager has revealed that some key components of the 2010 All-Ireland Intermediate winning team are on the cusp of returning to Tír Chonaill colours again.

She said: “We have a lot of the old senior players back again.

“Most of that group I’m talking about were teenagers when they first played on the senior team. They are still only in their early twenties.

“Aoife McDonnell is talking of coming back from Australia in nine weeks’ time, Ciara Hegarty is back, Niamh McLaughlin is in England but will be back for the summer.”

Foy is a former county player herself and has coached the Donegal Under-14s and Donegal Minors in recent years.

There are still twenty of last year’s minor panel still eligible for minors this year and the new manager is tabling a proposal to the next meeting of the Ladies Board to enter a team in the Under-21 competition that will be run in May and June.

She said: “It would be a great way for the girls to get a stepping stone because the transition from minor to senior is huge. It would give girls a chance to play at their own age group, too.”

Their Championship gets underway in July and Donegal are among the top teams like Dublin, Cork, Monaghan and Tyrone in Division 1 of the League.

“We are in a competitive League and I believe that we can stay up,” she said. “I wouldn’t have taken this on if I didn’t have the belief. We have some of the best players in Ireland playing for Donegal. It’s all a matter of performance, confidence and team spirit.”

Donegal has bid adieu to the likes of Yvonne McMonagle and Grainne Houston, who are among a hoard of former players on foreign climbs who would be a part of the squad were they on home soi,

“It’s kind of sad because of the talent that we have and the success that we’ve had that we have been struggling in Donegal,” she said.

“Hopefully we’ll make a go of it. People talk about the Corks and the Monaghans, but there’s no reason why Donegal can’t be up there.”

Elsewhere, other managerial appointments have been made: Sean Connaughton from Naomh Conaill will be at the helm of the Under 14s; Kenny Griffin of MacCumhaills will lead the Under 16s and Christopher Molloy, another Naomh Conaill man, has been appointed as Minor manager.