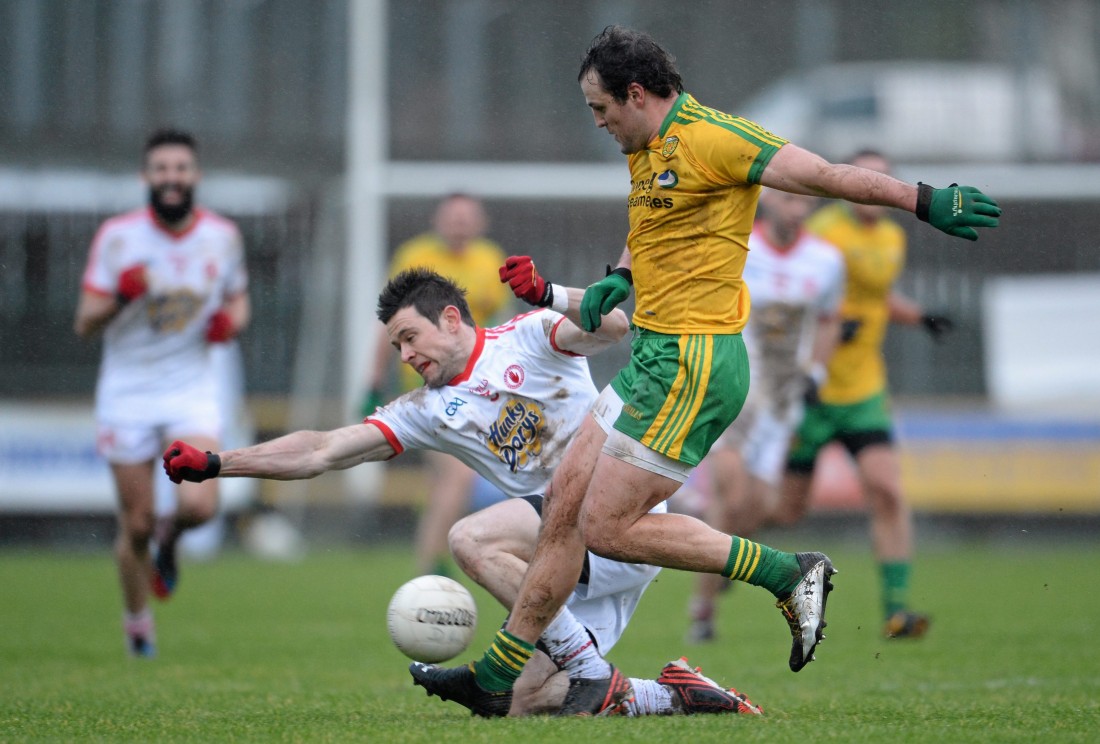 Michael Murphy in action against Tyrone.

THIS time twelve months ago, Donegal were only getting down to serious business, having only returned to collective training fillowing their team holiday in Dubai.

For the duration of the 2013 campaign, key players were absent at different stages, with Michael Murphy, Karl Lacey and Mark McHugh among those to have been absent at critical times.

During the winter, several of the stellar names had corrective procedures on various ailments, but the outlook now, the squad having been enabled to get back into training at the beginning of December, is reasonably bright.

“We tried to get the bodies back last year, but they just weren’t ready,” says team captain Murphy.

“It was a case of getting fitness work done in between games which was very difficult, whereas we have a good base done now through the McKenna Cup and we’ve got competitive game time too.

“The idea now will be to try and perfect things that haven’t gone right in the games to take into the League.”

2012’s Player of the Year, Lacey, was the most glaring absentee for much of the last campaign. Although the Four Masters man did appear in the Championship, his mercury was nowhere near those heights of the previous summer.

Now, though, the four-time All-Star has been able to build up a base from Donegal’s winter regime – and Murphy says his return has lifted the spirits.

“He’s a tremendous player. He leads by example and the whole place just looks up to him. To have him back and going at full throttle at this time of the year is fantastic.

“There’s a good focus there in training and in the gym.

“The big thing for us has been the injured men we’ve been getting back: Neil (Gallagher) started against Queens and it’s great to see him back, Christy Toye too.”

Donegal are in Division 2 of the National Football League this year – and begin with two testing away ties, against Laois and Galway.

Laois have been familiar opponents for Jim McGuinness’s Donegal, who defeated the O’Moore County to win the Division 2 crown in 2011. That year, Laois overcame Donegal for Tír Chonaill’s only defeat of the League campaign in Portlaoise, and they came to Letterkenny and won a year later.

For Murphy and co, the memories of their last visit to Salthill’s Pearse Park are still jarring. Donegal tried three different markers on Michael Meehan, but he hit 1-9 as Galway triumphed 1-16 to 0-12 in March 2009.

Lacey was on his travels in New Zealand at the time, but would return to put the shackles on Meehan in a memorable qualifier win over the Tribesmen in Sligo that set up the ill-fated All-Ireland quarter-final against Cork.

“I remember the last time I played in Salthill with Donegal, it didn’t go too well,” Murphy says.

“Division 2 is going to be very difficult.

“There are top quality teams and we really have to be on our guard. We have two difficult away games to start us off. We’ve played Laois a few times before. They have a new management team in and will be looking to get off to an impressive start.

“We go to Galway then and we’ll get nothing easy.”

The McKenna Cup has been useful for Donegal, this being the first time that McGuinness has gone to play the strongest hand possible in the competition.

As well as welcoming Lacey, Gallagher, Toye et al back into the fold, the lively showings of Darach O’Connor and Odhrán MacNiallais have been heralded in the county. Given that the squad was been shown to be fairly thin in 2013, their performances have injected new life into the ranks.

“The first thing to do when looking back at the McKenna Cup is to look at the new bodies who came in,” Murphy says.

“They acquited themselves very well. Darach O’Connor and Odhrán MacNiallais have really put their best feet forward, Stephen McLaughlin came in and did well against Queen’s.

“They’ve made a good push and add something new and different.

“You need competition for places. Those top teams get scores from all over and we’re looking towards that.

“You look Dublin, Mayo, Tyrone, Kerry, the top sides, they all have big squads with players able to come in and make an impact. We’ve been aiming to unearth a few during the McKenna Cup.

“It is early, but we’re relatively happy. I don’t think you can be happy the next day you go out, the National League will tell a story. It’s the same mantra, the one game at a time approach. That said, we’re still all looking forward to that day, May 25th.”

Donegal have not spoken of promotion.

There are no long-term goals in the League; their May 25 Ulster Championship clash with Brian McIver’s Derry is what matters.

“Down the line, the Derry game is the big goal we’re gearing to,” Murphy says.

“It’s been good to get the confidence back up again. Ultimately what we want to do is to bring Donegal to a better place.”