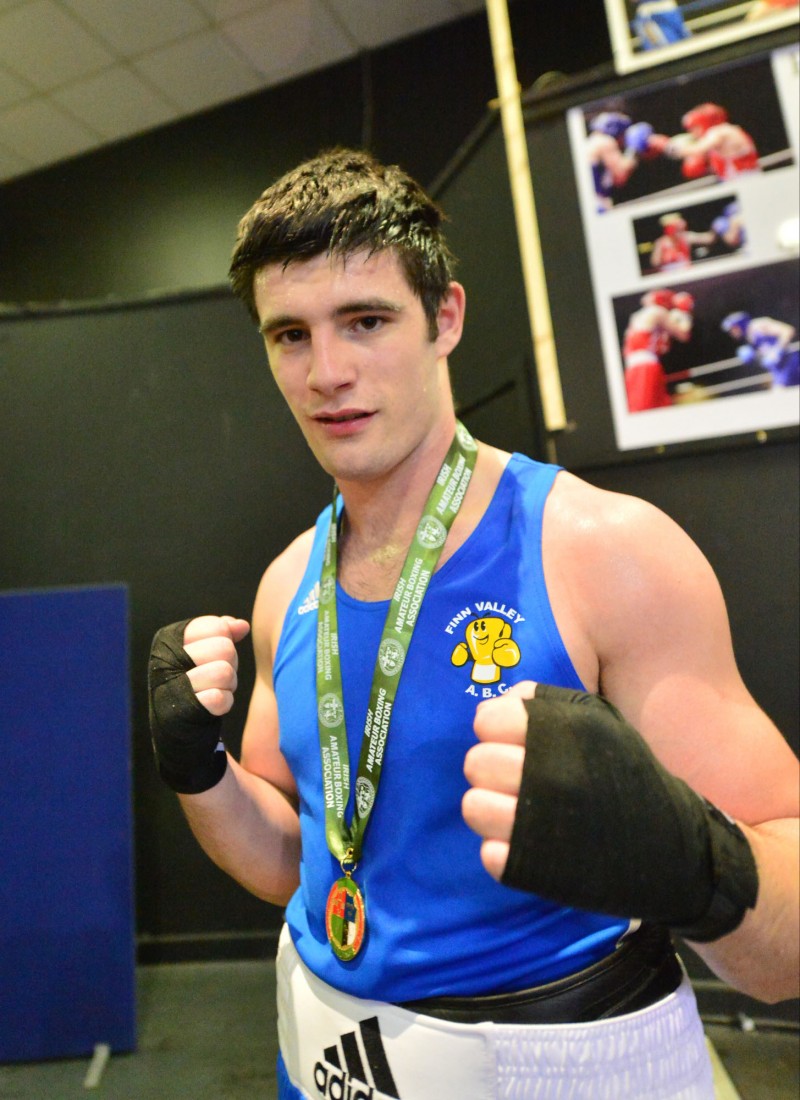 BY CHRIS MCNULTY, RINGSIDE AT THE NATIONAL STADIUM
PHOTOS BY ADRIAN MELIA

WHEN it was over, Michael Gallagher made a beeline for the blue corner and embraced the man in the yellow and black tracksuit.

The seventeen-year old Finn Valley ABC man took victory in the heavyweight final at the National Open Youth Championships in Dublin and there was much to admire about his ruthless demolition of Cavan’s Gary Maughan.

The moment came around ninety seconds into the second round. When he forced Maughan into a count in the blue corner, he sensed victory. And immediately he set about grabbing the triumph, planting a smashing right hook upon the temple of the already-dazed Maughan.

A second count in the neutral corner meant Maughan’s night was over – and Gallagher’s hand was held aloft to confirm his winning of a tenth Irish title.

The Kinletter youngster was ecstatic and raced to the blue stool where he flung those haymaking arms around his mentor, Billy Quigley.

It was a picture that could paint many words.

There was a time over the festive season when Gallagher had questioned his desire to put in the hard hours.

The crossroads moment arrived – Gallagher took the right turn, the coaches didn’t give up and the big man got his reward.

“He got a bit of a roasting over Christmas – but he’ll see now it was worth it,” said Finn Valley head coach Conor Quigley.

“Billy done a lot of work with Michael over Christmas. Fair play to him, he did massive work coming up to these Championships. At the end of the day, Billy polished him off.

“To train for four weeks and to come in here then and blow everyone away, that’s exceptional.

“He’s a serious talent – and if he wasn’t I wouldn’t bother about him. This boy can go places in boxing and we’re hoping that Michael will become a senior boxer.

“He’ll have the Under-22s and the Intermediates this year. He really can go on to achieve his dreams.”

Gallagher had been well on top up until the referee abandoned proceedings with Maughan unable to continue.

‘Chunk’ meant business from the off. While there were a couple of warning shots, and he did lose his balance on one occasion, they were an all-too rare occurrence and the first round was a 10-8 stanza in his favour.

Gallagher’s is a rare talent. This was his tenth Irish title win in his eleventh Irish final – and this, amazingly, was his first tournament in this division. Previously a light heavyweight, Gallagher is now operating at heavyweight.

“I was boxing well. Heavyweight suits me, I think,” Gallagher mused.

Conor Quigley believes the division is one in which his prodigy can flourish.

“He loves it, because he can get down on his feet and get punching,” he said.

“That Michael Gallagher is only at 60 per cent. When that man goes at 100 per cent it will be frightening.

“He has serious punching power. He honestly doesn’t realise himself the power that he possesses in that ring.”

On Friday morning, Gallagher tipped the scales at 88.7kgs – and Quigley believes that, in time, his make-up will be that of a man well primed to make an assault at senior level.

He said: “We would like him around 95kgs and to take him down to the 91kgs. That will happen through time because he’s still a growing boy. He will be a serious contender in the heavyweight division.

Sixteen-year old Maughan was a novice in comparison to Gallagher, with the Cavan man beaten by Cormac Long in the Youth and Cadet finals of last year. However, a 3-0 win in his semi-final against Paulstown’s James Mullaney outlined that he wasn’t an opponent to be taken lightly. Yet Gallagher’s win over James Hughes of Ryston was an indication that he was on the rise again, too

Sure enough, he repeated a party trick inflicted on many opponents – ending the contest inside the distance to book his ticket to the AIBA World Youth Championships in Sofia, Bulgaria in April.

Yesterday morning, Gallagher was joining up with junior coach Billy McClean and the Irish team in Dublin. Those Championships in April will form part of the qualification and selection for the Youth Olympics in China later in the year.

Conor Quigley believes his man to be ‘an exceptional talent’. He added: “He’ll be in now training with the senior team – and that’s where Michael Gallagher needs to be.

“He is beating these boys at his ease. That’s a massive boost for him, a tenth Irish title, getting in to train with the seniors and going to the World Championships.

“When he’s training with and watching elite boxers, and training under elite coaches he can only get better.”
Gallagher praised the work done by his coaches.

“They put me through it – and they’re the reason I won this.

“I was comfortable enough, but had to keep on top. You can never take any man for granted.” 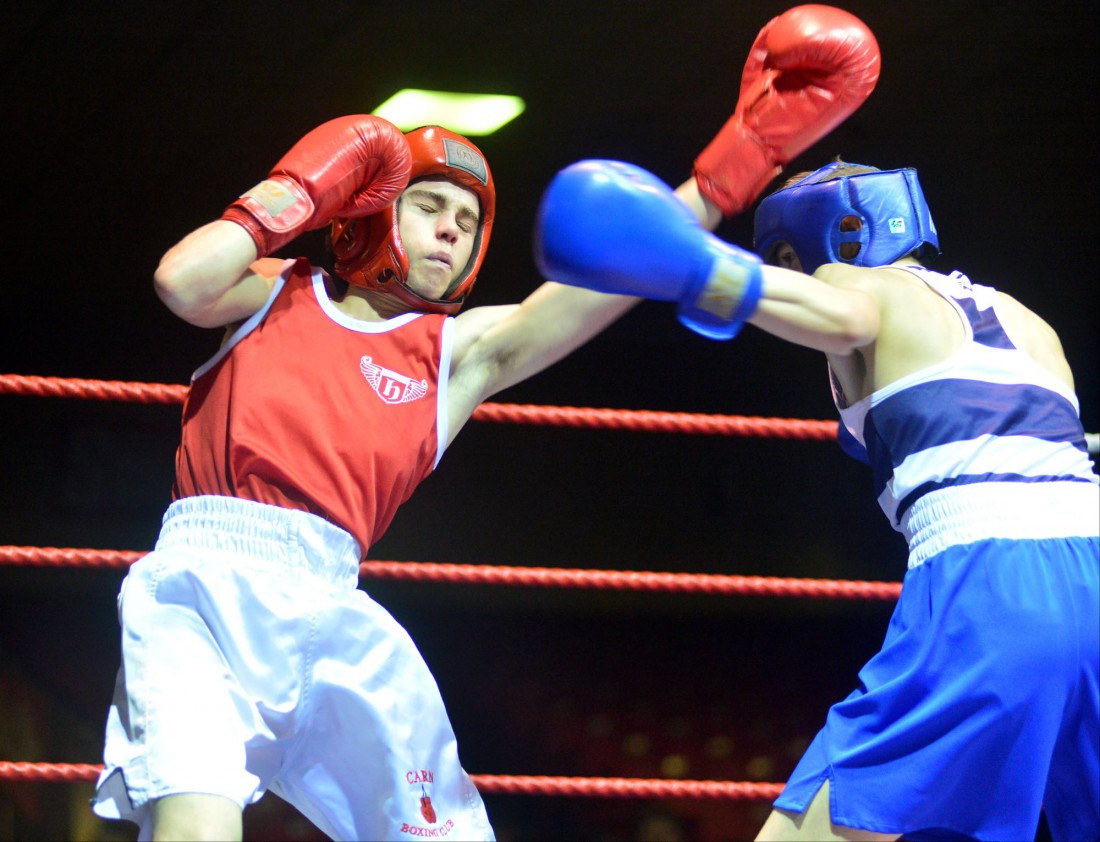 At light flyweight, Liam Callaghan from Carndonagh was beaten on a unanimous decision by Brendan Irvine.

Sixteen-year old Callaghan is a year Irvine’s junior and the west Belfast boxer was on fire in the first round to lay the foundations for his tenth Irish title win.

Callaghan took a knee early in a frenetic beginning to the bout, but recovered well by the end of the opening round, although Irvine was well on top.

“We knew that Irvine was the main man and he had the titles to prove it,” said Carndonagh coach John Mulhern.

“We gave him a good run and he certainly didn’t get to walk away with the title.

“2013 was a breakthrough year and Liam got on the stepping stones. Liam is young and has everything in front of him yet.

“Fighting here in the Stadium in a final will stand to him as time goes on.”