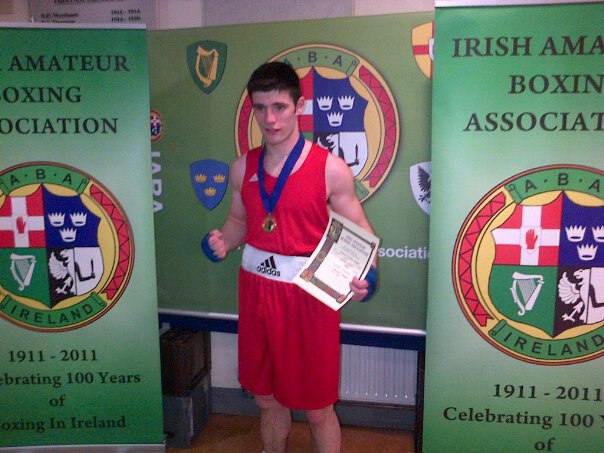 FINN Valley heavyweight Michael Gallagher and Carndonagh’s light-flyweight Liam Callaghan are through to the finals of their divisions at the National Open Youth Championships.

Both scored 3-0 wins in their semi-finals on Saturday night at the National Stadium and now stand on the verge of, not only an Irish title, but qualification for the AIBA Youth Championships in Bulgaria in April – which are acting as the only qualifier for the Olympic Youth Championships, which take place in China in August.

Kinletter man Gallagher comes with a big pedigree and is on the scent of what would be a tenth Irish title this Friday night, when he goes in the 91kgs final with Cavan’s Gary Maughan.

The seventeen-year old, who won a bronze medal at the 2010 European Schoolboy Championships in Anapa, had been struggling for fitness levels coming into these Championships – but he’s managed to reach the final without dropping a score, winning all of his fights unanimously.

On Saturday night, Gallagher was up against James Hughes of Ryston – whom he had knocked out in the first round of their last meeting in 2013. Hughes went the distance this time around, but he was still unable to thwart the advances of the Finn Valley powerhouse.

Under Conor Quigley’s tutelage, Gallagher is one of those boxers whose potential could carry him quite a distance with the right effort behind it. A win on Friday night on the South Circular Road would open some more doors for the heavyweight heavy-hitter.

He’ll be joined on finals night by Carndonagh’s light-flyweight ace Liam Callaghan, who overcame Regan Buckley of Bray 3-0 in the first semi-final of the evening.

Callaghan is another highly-rated puncher, who competed in the 2013 European Youth Championships in Russia and the 2013 National Youth champion will be the favourite to land the title when he squares off to St Paul’s man Brendan Irvine in the final.

Donegal had six boxers in action in the weekend’s semi-finals.

Convoy’s Mark McElhinney might have lost the 75kgs semi-final to Watergrasshill’s Luke Thomas, but after a three-year ring absence he’ll reflect on a positive Championships.

It was a case of so near and yet so far for Dungloe’s Mark McCole, who lost out at 64kgs to Shane O’Neill from St David’s, Naas, on a majority decision.

Donoghue won a gold medal at the 2013 World Youth Championships in Kiev last September and it was always going to be a huge ask for Mongan with Donoghue now meeting Frankie Cleary, the European Junior silver medalist, in the final.

MEANWHILE, Donegal cruiserweight, Hugh Paul Tierney, is through to the 85kgs at the National Novice Championships.

Tierney, orginally of the St John Bosco club in Donegal town, is boxing out of the Kilcullen club in Kildare. A gold medalist at the World Police and Fire Games, Tierney overcame Joe Hirst of Ballinacarrow 2-1 in the semi-final on Friday night.

Having previously beaten Brian Ward of Trojans BC in Galway, Tierney will now face Craig Williams from St Margaret’s in the final at the National Stadium on Saturday night next.