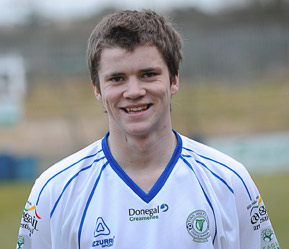 FORMER Finn Harps players Matthew Harkin and Aaron O’Hagan have signed for Ulster Senior League side Letterkenny Rovers, who have been busy in the market during the January transfer window.

Rovers open the 2014 campaign when they take on Harps in the Donegal News League Cup three weeks from Sunday and there’ll be plenty of familiar faces on show for Rovers.

Midfielder Harkin and O’Hagan, who can play at centre-back or centre-midfield, are the latest to have been added to the Leckview Park rollbook by manager Trevor Scanlon, in a clear indication that the Cathedral Town side have upped their ante to challenge Cockhill Celtic for honours this season.

Harkin spent time at Derry City before signing for Harps in April 2012. That season he scored four goals in 17 appearances and while he had been linked to a return to Finn Park he has signed on with Rovers.

Castlefin native O’Hagan has been a regular feature on Harps squads, but the versatile player has also turned his hand to the USL for 2014.

Rovers have also been linked to Milford’s Gary Merritt, who won’t be returning to Harps this season. As of yesterday (Thursday) afternoon as this newspaper was going to print, Merritt was still on the books of Donegal League side Milford United.

Also joining Rovers for 2014 are ex-Harps and Sligo Rovers attacker Stephen O’Donnell, goalkeeper Christopher Sweeney from Gweedore, as well as Barry O’Donnell and Darren ‘Kenny’ Doran, who have played in the USL with Killea FC and Kildrum Tigers, with Neil Harkin, formerly of Killea FC who had a brief spell at Harps in the past, forming part of an extremely strong panel at the club.

Ryan Shields from Kilmacrennan had been on trial at Harps in recent weeks, playing in the friendly games against Cockhill Celtic and Drumkeen United, but he looks set to play at Swilly Rovers during the 2014 season.