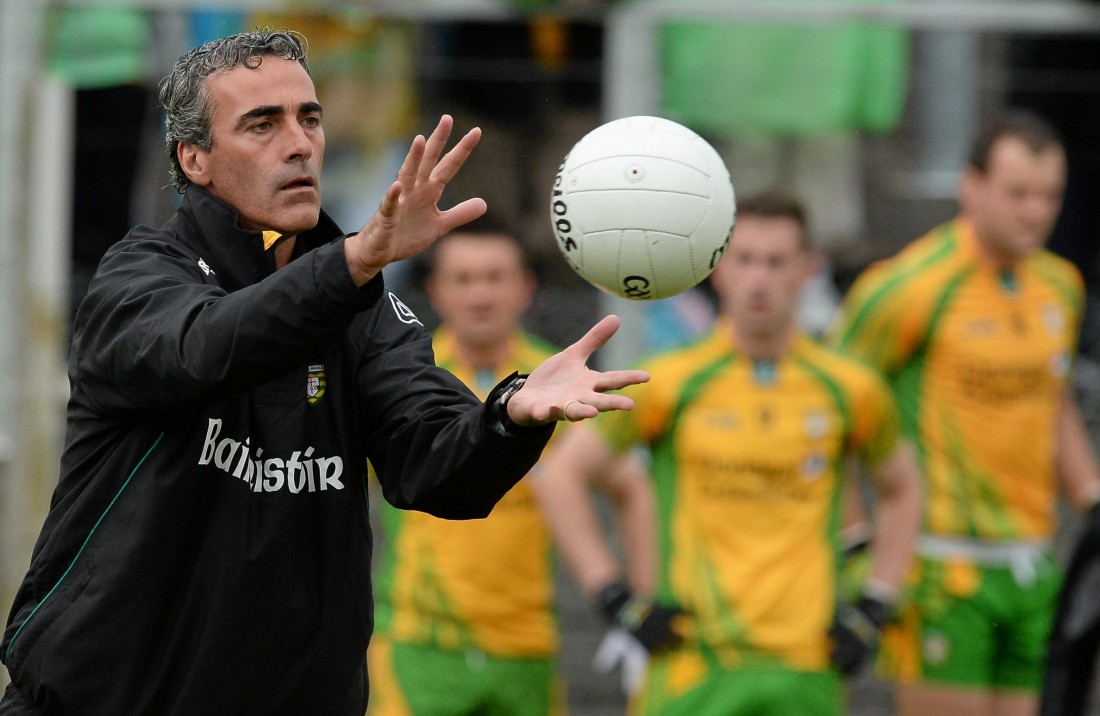 Eyes on the ball: Jim McGuinness and Donegal return to action on Sunday.

THE new year of 2013 chimed in on Jumeirah Beach in Dubai for the Donegal senior footballers.

Just a few hours before 2014’s bells rang out, Jim McGuinness and his squad underwent a training session in Castlefin.

This Sunday at O’Donnell Park in Letterkenny, Donegal are, as McGuinness says, ‘back to brass tacks’ when they face Mickey Harte and Tyrone in the opening Dr McKenna Cup clash.

“There’s no getting away from them, is there?” said Donegal defender Eamon McGee.

“It’s nice to get a bit of football at this time of the year. It’s good to get out and work on the intensity, even if it’s a bit off what we’d like it to be.

“We feel that we have a wee bit more in the legs this year.

“We’re not killing ourselves training, just ticking over, but when you compare it to last year, there is a wee bit more done. “We felt that it wasn’t in the legs. We had a lot of boys injured last year and it just wasn’t there. It’s nice to get it in now at this time and we’ve learned from last year.”

Donegal’s 2013 season ended five months ago this weekend when Mayo dolled out a heavy beating in the All-Ireland quarter-final.

Unusually for McGuinness, he has named as strong a panel as he can for the pre-season competition this year. Last weekend, ten players who featured in the 2012 All-Ireland final played in a challenge game against Roscommon in Convoy.

The few months off have given some of the walking wounded a chance to recover. Although there remain some notable absentees, McGuinness is hopeful of having a full panel from which to choose a team to take on Laois in the National League opener next month.

They start Division 2 with a pair of away games at Laois and Galway, with their first home game not until March, when Ulster Champions Monaghan come to Letterkenny.

“We have had a good long break so we’re fresh,” McGuinness said.

“It gives us an opportunity now to have a go at it. We haven’t been on the back of a really long season.

“A lot of the players were really frustrated with last season because try as much as they did they were picking up niggles and knocks and the season never really took off with injuries and set backs.

“They’re all very keen to get back at it again so that’s a good way to be coming into the new year.”

Karl Lacey missed most of last season because of injury, but the 2012 Footballer of the Year is close to a return. A minor hamstring complaint – picked up just before half-time in the Roscommon game – is likely to prevent him lining out against Tyrone, but the Four Masters ace will be back at some stage this month,

McGuinness said: “Karl was rehabbing really well, up until the Roscommon game. It has been very, very good by Karl over the last few months.

“He has been working away tirelessly. He deserves a break.”

Mark McHugh was another who had injury trouble in 2013, but the Kilcar man is college-tied this month, as are Patrick McBrearty, Ryan McHugh, Luke Keaney and Martin McElhinney.

Paddy McGrath, David Walsh and Christy Toye are others who are recovering from operations, while Neil Gallagher and Neil McGee are nearing full-fitness with newcomers Darach O’Connor and Hugh McFadden nursing hamstring injuries that are not said to be too troublesome.

McGuinness said: “We’re just trying to manage them and get them back into full swing.

“There are a lot of players we haven’t got a chance to get a look at yet.

“We are a wee bit light on the ground at the moment, but there are a number of injuries that aren’t too major. We just had a few men who needed wee bits and pieces.

“They’re not far away and, please God, they’ll be back for the start of the National League. At that stage hopefully we’ll have as close to a full squad as possible.”

McGuinness is known not to be a fan of the college teams’ participation in the pre-season competitions, or more accurately the third level teams having first pick on players.

The Donegal boss has cut a frustrated figure in Januarys past and had even hinted that he was considering the county’s future participation.

Unlike his opposite number on Sunday, Harte, the Glenties man has opted not to put the concerned players into an either-or option.

McGuinness does admit that he would prefer to have all of his players to hand.

He said: “It’s a pity. You’re not preparing the way you should for the National League. If we were able to have those players in our team for these games in the McKenna Cup we’d be building really well towards the Laois game.

“It’s disappointing for the players, too, because they’re missing some vital sessions and games with ourselves.”

While no players have retired from the inter-county game over the winter, McGuinness comes into 2014 minus the emigrated Ryan Bradley and Ross Wherity.

The Donegal boss has spoken to the duo, but is unsure of a possible return to the green and gold.

He said: “I don’t know. I didn’t want to delve too deeply because it’s a personal decision. I don’t want to pressurise them.

“If they came and said they were staying around we’d welcome them with open arms. As a manager I could put pressure on, but that wouldn’t be right for the player or for the person.”

Donegal have been paired in Section A of the McKenna Cup with old rivals Tyrone and Armagh, as well as a Queen’s University side expected to be captained by St Michael’s man and Donegal panellist Martin McElhinney.

On Sunday-week, Donegal take on Armagh at the Athletic Grounds before hosting Queen’s in Ballybofey on Wednesday 15th.

McGuinness has named eighteen All-Ireland winning medallists in his squad for the McKenna Cup, but their focus is a little further down the tracks. Buncrana’s O’Connor and Killybegs’ McFadden, when fit, will get a first taste of senior inter-county action this month, as will Stephen McLaughlin (Malin), while Toye has rejoined the panel alongside Leon Thompson, Antoin McFadden and Thomas McKinley, with Conor Classon not expected to resume training with the squad until March because of injury.

He said: “The most important thing is preparing for the League. That’s all we want to get out of it.

“It’s about getting pre-season work and player development work done.

“We have young players in there and we want to see if they can come through. Can those players force their way in and push for game time? That’s what we’re trying to find out.”

Last year, May 26th was the date ringed on McGuinness’s calendar; the date they squared up to Tyrone in the Championship opener. This time around, it’s May 25th – and a date with Derry at Celtic Park – that the eyes are trained to.

The squad will head to the Algarve for a weeklong training camp at Easter in preparation for that clash.

McGuinness said: “The bottom line is the Derry game. The Championship is where it’s at. It’s number one. We want to build traction in the McKenna Cup and the League. Everyone has the sights set on the summer time.”