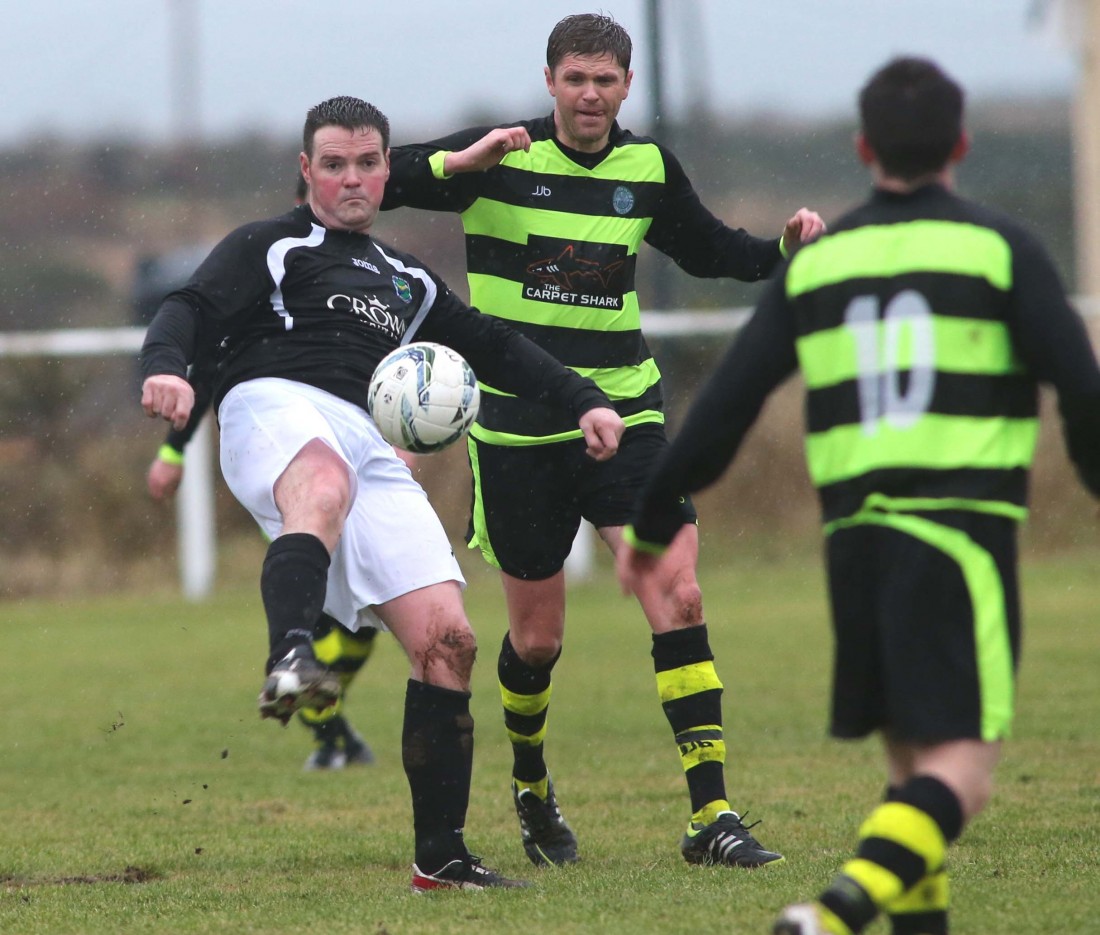 LIFFORD Celtic secured an unlikely point in their ongoing quest to retain the Donegal League title at a wet and windy Glasherchoo this afternoon.

Trailing 2-0 at the break, Brendan White’s team had struggled throughout to break down a resolute Glenea defence in which both central defenders Sean Coll ad Paul Sweeney were outstanding.

Indeed, it took a rare lapse by Sweeney to allow Celtic in for their opening goal on 85 minutes but even then it looked as though Tom Coll’s charges would go on to collect all three points.

With more than five minutes of injury time played, Lifford worked the ball down the left flank one last time. On this occasion the loose ball fell to the right man inside the six yard box, namely Mark Neeson, and he poked it beyond the diving Joe Coll into the net.

The goal sparked scenes of delight from the Lifford bench reminiscent of those seen six months earlier when they beat Dunkineely Celtic at Darney Park to bring the silverware back to the border town.

Trailing league leaders Rathmullan Celtic by six points going into the weekend with a game in hand, Lifford still believe that they have what it takes to retain the title – especially given the fact that they’ve yet to play Rathmullan this season.

Glenea United manager Tom Coll was still trying to come to terms with the loss of two valuable points at the death but he’s been about the game long enough to know that there will be a few more twists and turns yet before any awards are handed out.

Glenea had already gone close early on before Sean Coll’s free kick from 30 yards caught the wind and flew past the stranded Lee White for the game’s opening goal on six minutes.

White was beaten for a second time on 14 minutes. Ryan McFadden’s corner from the left was only partially cleared to Sean Coll at the edge of the penalty area and his first time shot deflected off a Lifford defender before findings its way past White.
Glenea should have added a third goal on 23 minutes when Ryan McFadden and Sean McBride combined to release Donal Coll but his shot was parried by White.

Sixty seconds later, the Lifford ‘keeper produced a wonderful diving save to his left to deny Mulhern a goal before Shaun Maguire’s long range effort was tipped over the bar.

Lifford, who had been forced into an early change with Paddy Sumners limping off on 35 minutes, also had to replace Ross Porter at half time.

The Glenea ‘keeper did produce an excellent save to divert Kevin McBrearty’s free wide of the target on 83 minutes moments after Johnny Mahon had stabbed another effort wide.

They were given a lifeline on 84 minutes when Paul Sweeney, who was excellent throughout, decided against heading McBrearty’s cross clear. Instead he ducked under the ball allowing half-time substitute Declan Lafferty to steal in unmarked at the back post to shoot home from close range.

With the clock ticking beyond 50 minutes in the second half, Lifford launched one last attack and it was one which they grabbed with both hands.

David Gethins sent full back McBrearty scampering clear down the left and his low ball into the danger area fell at the feet of Mark Neeson and before anyone else could react he managed to smuggle the ball under Coll and into the net.

Whether this was a point gained by Lifford or two lost by Glenea only time will tell as the race for the Premier League title gathers momentum.

One thing for certain though. This was a fine advertisement for Donegal League football. The game was hard, yet fair, with both sides trying to play football in very trying conditions.