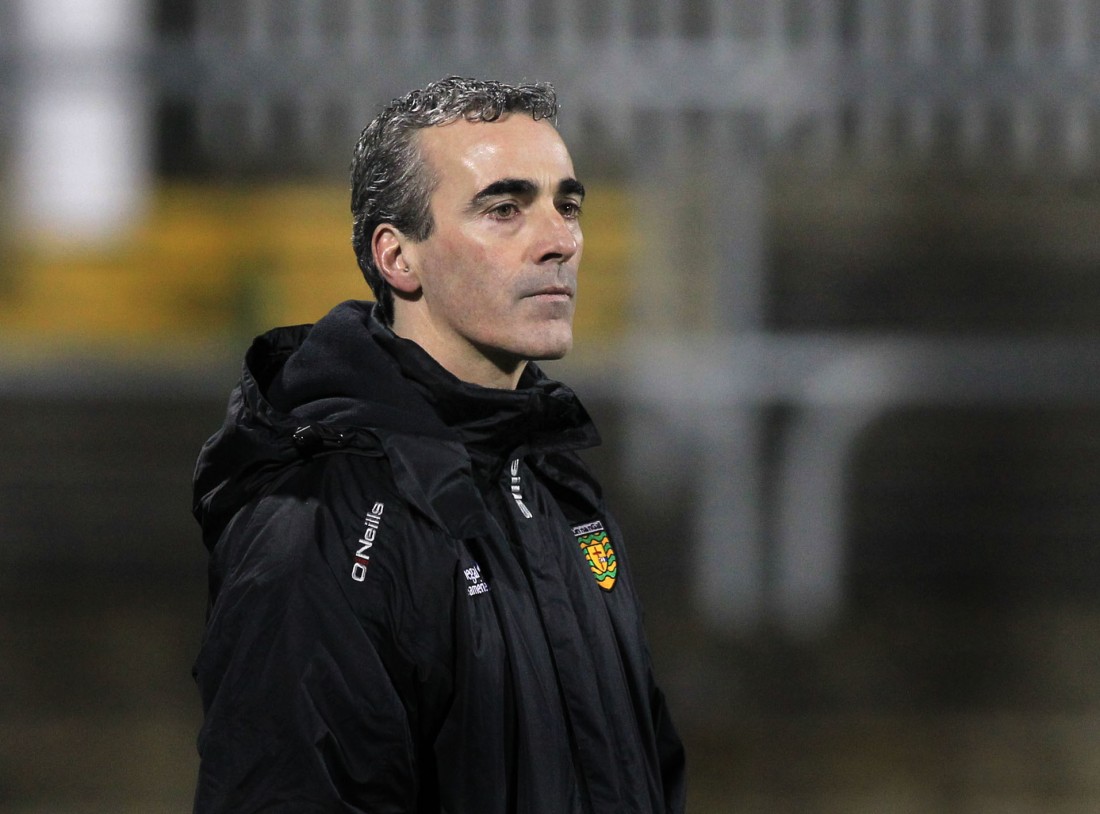 Although Donegal dispatched Queen’s University by twelve points in their final group game on Wednesday night in Ballybofey, Monaghan advanced to the semi-finals on points difference.

Michael Murphy, Colm McFadden and Rory Kavanagh netted the goals as Donegal scored a 3-17 to 3-5 win, but it wasn’t enough to steer them into the knockout phase.

Instead, Jim McGuinness and his group will have a couple of weeks behind the closed doors, starting with sessions tonight and Sunday to begin their League preparations in earnest following a useful Dr McKenna Cup campaign.

“We have still got Paddy McGrath, Mark McHugh, Patrick McBrearty and a couple of others to come back, but hopefully it won’t be too long before we see them again.

“We’ll focus now on our own group in terms of getting a look at everyone in in-house matches ahead of the National League. That’s the best way for us over the next few weeks.

“It’s about turning the focus back to the overall squad now to get a look at everyone available to us out on the pitch and prepare for the Laois game. We’ll switch onto that.”

McGrath had surgery on a groin injury and isn’t far away, while McBrearty has been cleared of injury and will return to action in the coming weeks, too. Mark and Ryan McHugh (Sligo IT) and Luke Keaney (UUJ) have been with their colleges this month, but will return to work with the county now that the McKenna Cup campaign has ended.

McGuinness said: “We haven’t had all the players available, so we’ll focus now on the other players within our own setting. We’ll try now to fine tune the thing for the lead-in to the Laois game.”

McGrath and McBrearty, the Donegal manager noted, are ‘moving in the right direction’, but Killybegs man Hugh McFadden wasn’t able to feature in the McKenna Cup because of a hamstring injury.

McGuinness said: “It’ll be another wee while before we get him integrated in training and he’ll have to push himself on when he does get in.”

Karl Lacey left the action on Wednesday nursing a tight hamstring, but the 2012 Footballer of the Year will be ‘okay in a couple of days’.

Wednesday’s win saw Neil McGee and Neil Gallagher make their first starts of the campaign, while Christy Toye came off the bench to make a first competitive appearance for the county since the 2012 All-Ireland final.

Following a troubled 2013 with injury and a virus, Toye is back on track – and scored a point in a fine second-half display.

McGuinness said: “He played very well when he came on and gave some very good passes inside. He found Michael and Colm very well.

“It was very good for Christy on a personal level. It’s been a very difficult road for him. You always have a fear that niggles can come into it, but he’s done very well and has been showing very well in training in terms of his aerobic capacity.”

Donegal were in control for the most part, although Ryan Rafferty hit three goals for Queen’s.

McGuinness said: “It isn’t like us. It was a funny one. They had three goals and no points for a while. It doesn’t happen very often to us. We’ll look at it in the video to see where that came from.”

Bar the injured and college-tied among them, Donegal’s big guns were all rolled out for the McKenna Cup as McGuinness and Donegal return to action looking to set down a marker.

The Glenties man said: “It has been very good for us. We went with a stronger team because we had a long lay-off on the back of the Championship.

“We’ve been trying to move with a bit of intent towards the League and we have got that out of the McKenna Cup, which has been good.

“If we had won the first game we would have been in the semi-finals, but we never looked at the competition like that at all. We just wanted to get a good performance under the belt, get the cobwebs blown out after a long pre-season and just get the ball rolling again.”

With UUJ conceding Wednesday’s game against Cavan and the colleges again having difficulties with some county managers, the format of the competition has come under scrutiny again.

McGuinness sympathies with the college managers, but admitted that a situation like Wednesday wasn’t ideal where he came into opposition with a member of his own panel – Martin McElhinney, who is the Queen’s captain.

He said: “The negative is the situation for Martin McElhinney, who has worked really hard and got himself into very good shape, but we’re not able to have a proper look at him. You don’t see where their form is at going into the League.

“We are very cogniscant of the fact that a lot of them are on scholarships and we wouldn’t want to put that in jeopardy.”