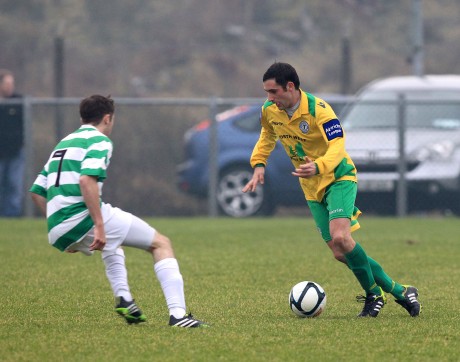 GARETH Harkin has put pen to paper on a one-year contract at Finn Harps.

The Letterkenny native has returned home after spending the last two years in Australia and has returned to the club with whom he spent the 2011 season.

Harkin, primarily a left-sided player, played for Harps during James Gallagher’s tenure as boss, and on Wednesday night manager Ollie Horgan confirmed the capture of the 26-year old who has been on trial with the club in recent weeks.

Harkin also played in the Irish League for Coleraine and while the Bannsiders had been linked to a move Harps have snapped up his signature ahead of the new campaign and Harkin – a son of former Finn Harps and Fanad United player Kenny – will be involved this weekend as Harps play two friendlies, against Westport United and Cork City, in Galway.

“Gareth played for me at Fanad when he was a young lad,” Horgan told the Donegal News.

“He hasn’t played in two years now. He has a lot of experience, but he needs to get back to full fitness and get match fitness. We’re glad to have him on board.

The signature of Harkin takes to sixteen the number of players who have now put pen to paper at Finn Park as things take shape for the new manager.

This week, Harkin’s signature was preceded by confirmation that Pat McCann, Johnny Bonner and Matthew Henry had all agreed to deals at the club, all three having been at Harps last season.

Harps have two friendlies this weekend, against Westport on Saturday at 3.30pm in Fahy’s Field and against Cork at 1pm on Sunday in Drom.

Horgan will include striker Carel Tiofack in the panel for the weekend double of matches.

Cameroon-born Tiofack was on the books of Ipswich Town and was reported to have been courted by the Arsenal manager Arsene Wenger at one stage, but nothing materialised and he was released from Portman Road in June 2012. Tiofack, who grew up in Ballincollig, Cork, is a Republic of Ireland Under-19 international.

He cut a frustrated figure on leaving the Tractor Boys.

“I played out on the left one week, on the right the next and I found it tough to get any rhythm to my game,” he said at the time.

“When I signed for Ipswich it was as a forward which is where I played for Ireland so I’m not sure why I didn’t get a run of games as a forward or playing just off a main striker.”

Discarded by Town, Tiofack felt the benefit of starting afresh in new surroundings.

Having left Ipswich, the 18-year old joined the League Football Education programme and joined Spanish lower league side CF Federico Mayo and just four months later, Cadiz B the reserve side of former La Liga outfit Cadiz, came calling with the offer of a one-year deal.

He joined Limerick FC in July of last year, but made only eight appearances, most of them as a sub.

“I have met him and I’ve spoken to him; we’ll have him with us this weekend,” Horgan confirmed.

Daryl Carrigy, a striker on the books of Derby County and Monaghan midfielder Gerard O’Callaghan impressed in a win over Drumkeen United last Wednesday, but neither seems likely to sign, with Horgan saying: “I won’t say it’s totally out of the question, but it has died down a bit since last week.”

The signatures of Shaun McGowan, Aaron Harkin and Micheál Doherty are likely to be confirmed in the coming days, while the club’s Under-19 players will be tied up next week. They include goalkeeper Shaun Patton, who at present is the only ‘keeper at the club.

Horgan has found obtaining a number 1 to be a trying exercise. Conor Winn, formerly of Shamrock Rovers and Dundalk, had a trial against Cockhill Celtic, but had to go off after being injured. The 6’6” Englishman is likely to be a part of the panel in Galway and may yet sign.

While Gavin Cullen had indicated that he was willing to make a move to Ballybofey, he now seems set to stay with Cockhill Celtic.

“The door is very much open to him,” Horgan said, hinting that it was up to the player to make the next move.

As well as Winn, Horgan will take a look at another, as yet unnamed, goalkeeper this weekend as he steps up his preparation for the new season.

Horgan was delighted to add midfielder McCann to his roster earlier this week.

“I met Pat in Dublin a week ago and he was keen to come back to Donegal,” said Horgan who is to undertake the UEFA Pro-Licence, alongside the likes of Peter Hutton, Don O’Riordan and Tom Mohan later in the year.

“I like his ideas and he has a great drive about him. He is intent on doing well. He’s a serious guy, always trying to raise the bar.”

Johnny Bonner is back having made fifteen appearances last season while Matthew Henry was a member of the club’s Ulster Senior League panel last season.