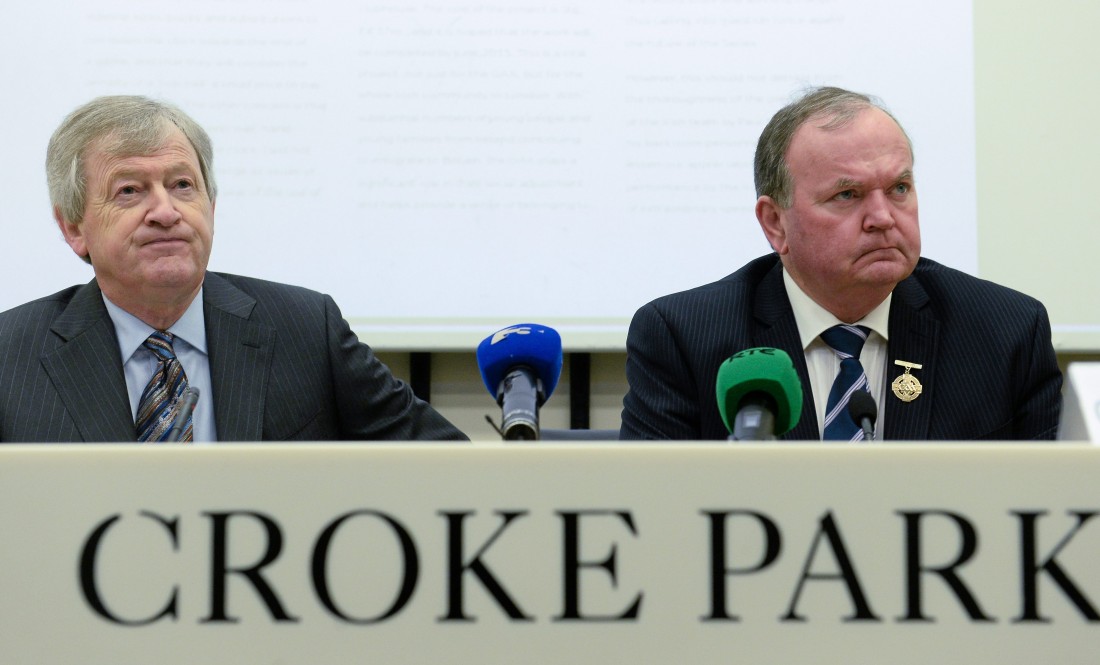 PARAIC Duffy, the GAA’s Director General, has levelled stern criticism at Donegal’s door over the handling of both the incident during a League game last April when Patrick McBrearty was bitten by a Dublin player and the county’s decision to defer the 2014 Donegal senior football championship until the county team’s season has ended.

In a hard-hitting attack, the Monaghan man has left no ambiguity in his annual report to next month’s annual Congress.

A case against the Dublin corner-back Kevin O’Brien collapsed after McBrearty chose not to attend a Central Hearings Committee meeting to investigate the matter, after the Dubliner had been given a proposed three-game ban by the Central Competitions Controls Committee over an alleged biting incident in the game at MacCumhaill Park.

While Donegal officials presented significant evidence of a bite on the player’s upper arm, the case fell when McBrearty opted not to attend. At the May sitting of the Donegal county committee the Donegal Chairman, Sean Dunnion, said that McBrearty had acted against the wishes of senior officers and management when he chose not to go.

In his report, Duffy says that the incident was one of the ‘low points of 2013’.

“That was a disgusting and shocking incident in itself, but what is just as reprehensible is that no one could be held to account for what happened,” Duffy writes.

“The Central Competitions Control Committee (CCCC) investigated the matter as thoroughly as possible, but was greatly hindered by the absence of video and other evidence.

“The CCCC, therefore, was reliant on the integrity of those involved to play their part in ensuring that justice was served. However, no one was proved to have inflicted the bite simply because no one admitted to having done so and because the player who was bitten decided not to attend a hearing on the case.

“The counties involved may have chosen to deal with this incident solely in terms of their own interests; be that as it may, they did not emerge with any credit and succeeded only in damaging the reputation of the Association.”
Duffy has hit out at both Donegal and Dublin for their respective parts in not ensuring that justice was done.

He writes: “The responsibility for limiting the damage to the reputation of the Association lay with players, team officials and county committee officers.

“Leadership was required from the counties involved to protect the good name of the Association: It is disappointing that it was not forthcoming.”

Duffy also hits out at the decision, taken in September by the clubs of Donegal, to wait until the Donegal senior team has exited the race for the All-Ireland before starting the 2014 SFC.

Jim McGuinness had favoured the playing of either one or two rounds of Championship football in April.

After the decision was made public, Donegal officials were called to attend a meeting in Croke Park to explain the matter, on foot of a complaint sent by the Medical, Scientific and Welfare sub committee.

Despite this seeming to be common practice in other counties, it is Donegal who have been picked out as the problem child by the top brass in Croke Park – and Duffy says that the arrangement ‘shows neither concern nor respect for club players’.

The blame, he suggests, lies with the club.

He writes: “Yet clubs are not altogether blameless when they lose out to the demands of the county team in this way. It puzzles me that clubs allow the requirements of inter-county teams to exert such a strong influence on the scheduling of club championship games. Rules 3.20 (c) and 6.21 in the Official Guide and, indeed, the authority of the County Committee, give clubs both the power and the means to address this issue.

“Clubs seem reluctant to object formally to the long intervals between club championship games. We continue to wring our hands about this lack of respect for clubs, but it is time that clubs, as the core members of most County Committees, stood up for themselves.”

Mr Duffy has suggested that the GAA introduce a rule whereby that a club championship must be concluded by the first Sunday in October before a representative from that county can be permitted to go into the provincial club championship.

“The rule would need to allow no flexibility for deferrals, derogation, replays, etc,” he says.

“I am certain that, backed by such a rule, clubs would exert pressure on their CCC and County Committee to ensure that championships are completed by the designated date. An additional advantage to passing such a rule would be that the All-Ireland club championships in all grades could be completed in the calendar year.”

The GAA Director General also gives strong backing to the retention of the provincial inter-county championships. He writes: “There are those who continue to demand  an end to the province-based structure of the championship; one is led to wonder if these critics pay any attention at all to the evidence of the value placed by teams on provincial titles.”