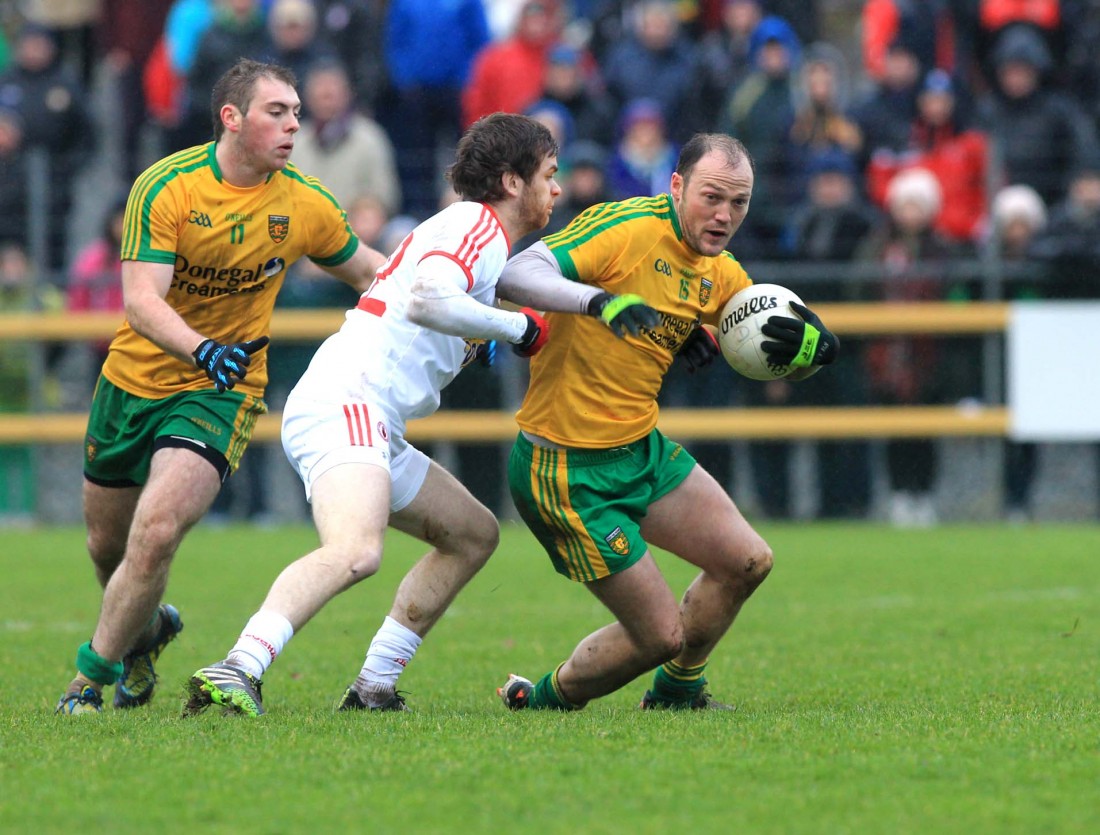 Colm McFadden in possession against Ronan McNamee of Tyrone.

LAST Sunday, while the game against Tyrone was ongoing in O’Donnell Park, a handful of players were out on the back pitch being put through a rigorous work-out.

So, while 3,500 spectators were watching Donegal and Tyrone facing off in the season opener in the main arena, behind the doors were these men who have clearly their minds trained on other matters.

They were players who weren’t togged for the game, but were going under some serious scrutiny by Damian Diver.

It has been surprising the road that Jim has gone down with so many of the big names, Colm McFadden, Michael Murphy, Eamon McGee, Rory Kavanagh et al lining out in the McKenna Cup, a competition that he would have appeared happy not even to have entered in previous years.

Those men playing for the county in previous Januarys under Jim would have been unheard of.

But it is no bad thing in having the big guns out of the holster early in the year, either. It goes to show you how serious it’s all being taken.

This month is all about getting ready for the League.  You could see that Donegal became very heavy legged on Sunday in the second half. The legs went during that second half.

I wouldn’t be overly worried at all about a defeat on the first Sunday in January – these are still extremely early days yet.

Results in the McKenna Cup do not matter a jot. It is about working on the plans for the League.

That said, it would have been nice to win the game, especially given that we had eight of our All-Ireland winning team on from the start.

Did we get any plusses or is there a lot more food for thought?  For me, it’s the latter.

Aside from Murphy and McFadden we had only one player getting on the scoreboard – Eamon McGee.

That is a problem in that we aren’t getting scores from our half-forward line. Really we need to be doing that. In 2012 when we won the All-Ireland, we were getting of scores from elsewhere, but they weren’t in abundance – Michael and Colm shouldered the bulk of the responsibility.

There are some areas of concern.

You could see in the first half that Donegal had been working hard on the kick-out strategy. Murphy was a great ally coming out to the middle and they won a fair percentage of the kick-outs, but once Mickey Harte got Tyrone in at half-time that all changed. Harte is as astute a man on the sideline as you’ll get – and Tyrone totally nullified that in the second half.

They pushed on and just made sure it wasn’t a threat to them anymore. The ball was being kicked away within seconds, which is so unlike Paul Durcan.

But it shows you that, if the opposition put the pressure on, that it’s very difficult to do that with kick-outs.

Stephen Cluxton is the man in this area. He just finds that extra yard and is so, so precise.

There is no-one else that will reach his level. Quickness and timing are key. It is such a fine art – and Cluxton has been doing it for years.

It was probably something in the back of the Donegal management’s minds given that big Neil Gallagher wasn’t available around the middle of the field. When Neil isn’t there, you can see that it’s a huge void to fill.

Darach O’Connor made his debut and looked lively – but I think he’ll be a summertime player, when the weather is good and the pitches are hard. In good conditions he will be a handful for any defender.

Odhrán MacNiallais has been doing massive work in the gym and is going well – but he won’t be a midfielder. He could well be a man to go into the half-forward line because he is capable of taking a score.

All in all it was a good workout.

They’re in Armagh this Sunday – but really it is all about getting ready for a good League campaign. Towards the middle and end of the League we will have a fair idea of the way our season is panning out.

There is an awful lot of work going in, a massive amount of training at the minute. It is nice to win games and build confidence – but that can be done in the League. Now it’s about getting men into match pace for February.

Something I’ve been asked a lot lately is, are we going to have any new player coming in to take the world by storm or are we depending on the men returning? We’ll be depending on the usual faces and it seems extremely difficult for others to step in. Donegal and Jim are giving it a hell of a lash this year and want the ultimate prize again.

That’s a long way down the line right now though. For now, it’s about taking the small steps in the right direction.

AFTER all the debate, there wasn’t much fanfare about the black card in Letterkenny. Only Donegal’s Rory Kavanagh was black-carded by the referee Barry Cassidy, who I felt was lenient and reluctant to flash cards. This is where common sense comes in – and Barry Cassidy used a good slice of common sense on Sunday.

It is also where consistency comes in – will other referees be the same? Probably not and that is the great pity.

There is great confusion – and many people were wondering why Niall Morgan wasn’t carded for his foul on O’Connor. There will be plenty of debates going forward, I suspect.

Eunan’s go to the Maxi

MAXI Curran has been appointed as the new manager of St Eunan’s – their first outside manager.

Eunan’s have a fantastic nucleus of players there and any young lad coming in looking to make their senior team will have played in or been close to making county underage teams.

There is a good squad of players there. They were caught on the hop by Malin last year, but that doesn’t take away from the quality that is within that panel.

Rory Gallagher has gone in alongside John McNulty in Kilcar – and they are a club that is well capable of winning a Championship. It’s now 21 years since they won Dr Maguire, but I think they have enough about them. John has done a lot of work with the club and Rory’s addition will be a huge help too.

MY sympathy goes out to the Kelly family in Cloughaneely on the death of John, a great GAA man. And also to the family of Gerard Monaghan in Convoy, who suddenly died earlier this week. Both are massive losses to the Donegal GAA family.

May they Rest In Peace.