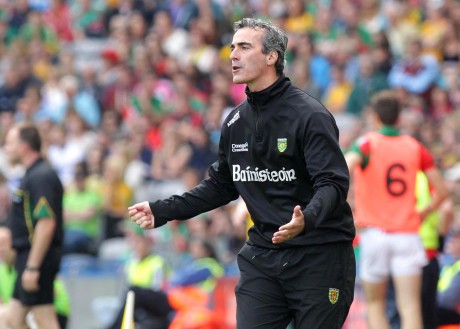 At the last head count during the week, McGuinness estimated that he had only ‘twenty or twenty-one’ players from which to select his first team of 2014.

Since the All-Ireland quarter-final defeat to Mayo in August a number of players have underwent corrective surgery for various ailments.

Paddy McGrath, Patrick McBrearty, Christy Toye and David Walsh are all recovering from operations, while Neil Gallagher and Neil McGee are also recuperating from knocks.

McGuinness predicts that Gallagher and McGee will be available ‘in another week or two’ with the other quartet having set a targeted return date of the National Football League opener against Laois on February 2nd.

2012 Footballer of the Year Karl Lacey is a doubt for this week’s game against Tyrone after being forced out of Sunday’s challenge game against Roscommon with a hamstring injury, though McGuinness has been pleased by the Four Masters man’s recovery.

“We have a fairly extensive injury list at the minute, which is disappointing,” McGuinness told the Donegal News.

“We’re down to maybe twenty or twenty-one for the weekend so we may bring in one or two if the right ones become available.”

2012 All-Ireland medalists Marty Boyle and Adrian Hanlon have left the panel and it is understood that Glenswilly’s Ciaran Bonner, who had been recalled by McGuinness this winter, has also opted out.

McBrearty, along with Martin McElhinney, Mark McHugh, Ryan McHugh and Luke Keaney are college-tied for the McKenna Cup, but

McGuinness has still been able to name a strong-looking squad.

He said: “We are a wee bit light on the ground at the moment, but there are a number of injuries that aren’t too major. We just had a few men who needed wee bits and pieces.

“We’re just trying to manage them and get them back into full swing. They’re not far away and, please God, they’ll be back for the start of the National League. At that stage hopefully we’ll have as close to a full squad as possible.”

While Sunday’s team to face Tyrone is expected to include several regular faces, the likes of Odhrán MacNiallais, Eamonn Doherty, Leon Thompson and Antoin McFadden could get a chance to shine.

Five months have passed since their 2013 shuddered to a halt against Mayo, but McGuinness and Donegal are back on the carousel again this weekend.

He said: “It’s back to brass tacks again this week with competitive games again.

“We have had a good long break so we’re fresh. It gives us an opportunity now to have a go at it.”