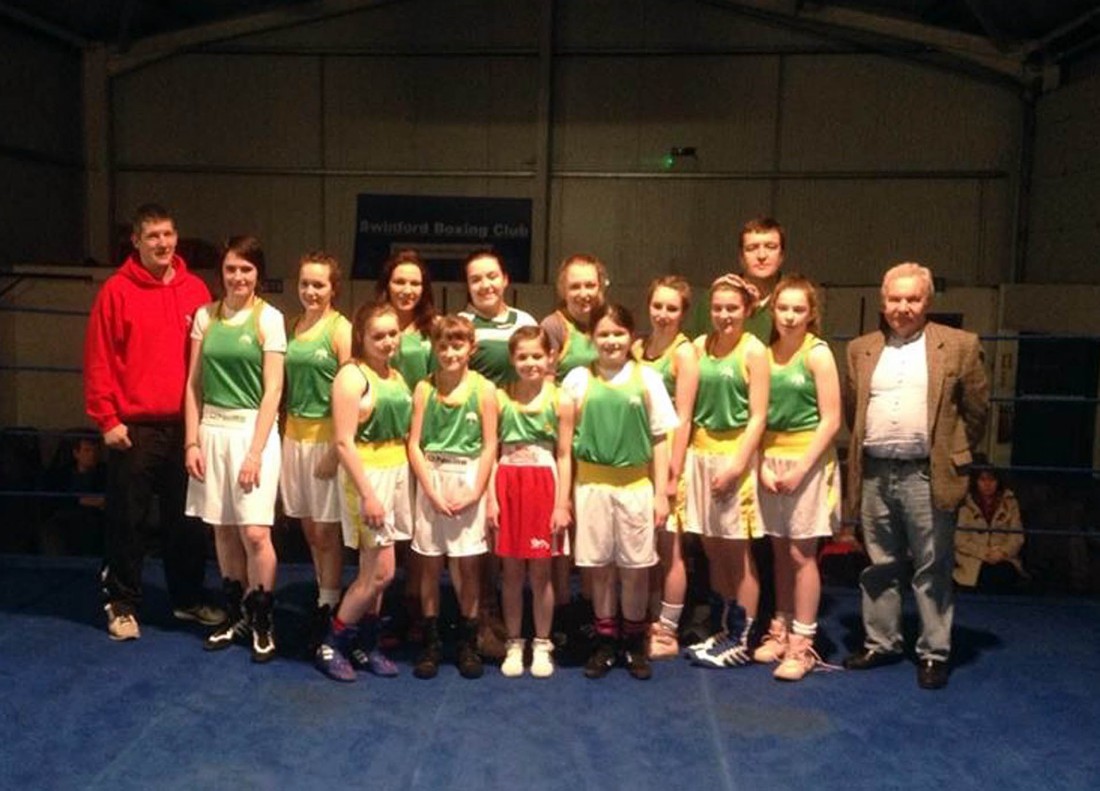 Donegal girls team, with coaches who competed at a Tournament in Swinford, County Mayo at the weekend.

HISTORY was made on Friday night when, for the first time ever, an all-female team of boxers left Donegal to take part in a major inter-county tournament – and they returned from Swinford, County Mayo with a landslide win.

The team was selected from the Sunday morning squad training sessions at the Raphoe ABC gym, with nine Donegal girls joined by three punchers from Newtownstewart, Strabane and Eglinton.

The local boxers enjoyed a night to remember in the Conway gym, nine of them winning their contests in impressive fashion.

Twin Towns BC’s Ciara Anderson, a grand-daughter of former Olympian Brian Anderson, was in her first piece of action, but the fifteen-year old Ballybofey woman was out-pointed by Shannon Sweeney of Westport.

Two-time Irish champion Niamh McCole of Dungloe was a deserving winner against Amy Sweeney and there was a ruthless display by Carrigart’s European Under 18 bronze medalist Maeve McCarron, who stopped home fighter Amanda Walsh in the opening round of their bout.

“We had a great night with a bumper crowd and credit goes to Johnny Mulhern who takes the squad training in Raphoe every Sunday and who was the match-maker,” said the team manager, Raphoe’s Peter O’Donnell.

“It was fantastic to make history in taking an all-female team out of Donegal – that’s one for the boxing annuals.

“The girls would also like to thank Maeve McCarron, who pleated their hair for the fights and there wasn’t one stoppage because of a headgear problem all night.”

There was one support bout, with Dungloe’s Matthew McCole defeating Peter Butler from Ballinrobe.