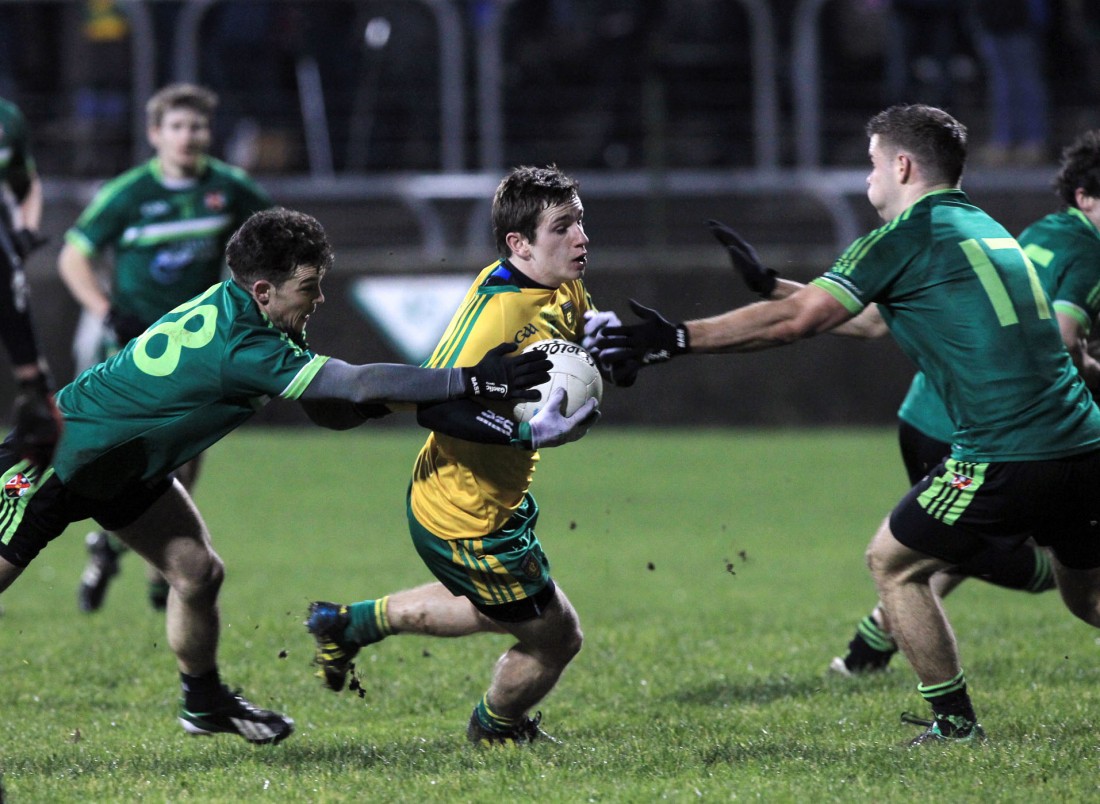 Donegal’s Darach O’Connor is challenged during the match against Queen’s University.

THAT’S the McKenna Cup done and dusted for another year from a Donegal point of view.

Two victories this week over Armagh and Queens University weren’t enough to seal a place in the semi-finals, but Jim McGuinness will still reflect on what has been an encouraging couple of weeks in action in the pre-season competition.

Wednesday night’s was an easy enough win over Queen’s. The colleges’ involvement in the McKenna Cup has been the subject of debate again after the withdrawal of University of Ulster, Jordanstown, who conceded their game against Cavan, the second year in a row that a college has pulled out after Queen’s withdrew from the 2013 competition.

I think it’s time that the college involvement was ended. Their inclusion serves no purpose to inter-county managers trying to prepare for the National League and we end with an almost-farcical situation of having a player – Martin McElhinney – having to play against a county team he is pushing to be included in.

I think the best way forward for the Ulster Council would be to divide the province into two groups, a four-team group and a five-team group with the table toppers going through to the final.

Anyway, for Donegal this year’s was much more positive than previous. On Wednesday night Michael Murphy and Colm McFadden were in tip-top form, scoring 2-10 between them – and their retaining this form heading into the League will be vital for the county.

Odhrán MacNiallais and Darach O’Connor showed very well during the McKenna Cup and showed that they can become more regular features of the Donegal team in the months ahead. It’s great to see the panel added to.

Ok, this was pre-season and these players still have a lot to do to step up and be senior inter-county players. There is a huge step from McKenna Cup to League, but they have certainly made all the right noises in the McKenna Cup.

One worry for Donegal over the winter months has been the depth of the squad, or lack thereof, exposed when a couple of key injuries left them bailing water from the boat at the latter end of the 2013 campaign. But to see Odhrán and Darach showing themselves to be players capable of making the step up has been really encouraging – and we should be seeing more of these lads in the county jersey.

Odhrán is a cultured footballer and is following in talented footsteps. His father Donnacha was a very good footballer and his brother Ronan could have made it into a more regular county footballer were it not for his injury troubles.

There is an awful lot of work to do, but everyone knows that and there are plenty of positives to be taken out of it.

I mentioned it last week, but I’ll say it again just to emphasise the point: this time of year is not about results. The most important thing about the McKenna Cup is to get a squad of players together and make sure you have men back in harness for the League.

It was also very positive to see the likes of Neil McGee, Neil Gallagher, Karl Lacey, David Walsh and, especially, Christy Toye, coming back into action.

The big guns were rolled out and any of our big players who were available got game time.

With a strong breeze Donegal were behind at half-time on Sunday in Armagh and found it hard to get going, until McFadden’s goal paved the way. That was the turning point, finally going in after three attempts were being blocked.

It was Donegal’s first win since the All-Ireland qualifier against Laois. Granted, we had only played two games since, but it was still surely very encouraging for the players to get themselves back into a winning dressing room again.

That feeling of walking into the dressing room after a win is hard to top. Winning matches is what it’s all about as a player.

I was talking with Barry Dunnion, the Four Masters footballer and former Donegal ace, during the week and we were discussing injuries and their impact on players. He was telling me that he felt that rushing back from injuries had been a big part of his problems in that his ailments hadn’t properly got time to heal.

For any young player this is worth taking note of. No matter what grade or level football you’re playing, you always want to get back playing games – and as quickly as possible. Sometimes, you’ll take a risk, but managers – and I include myself in this too – should start looking after the needs of their players.

Any manager wants his best possible team out for important games. Maybe a man mightn’t be 100 per cent, but you should have it at the back of the mind that by putting a player in action when he is a little off the pace could be putting him at risk.

Young players now are doing an awful lot of work and minor football has gone down the road of gym programmes.

Mark McGowan is a case in point. Still in his 20s and one of the outstanding prospects to have come out of St Eunan’s in the last decade, he has had to retire from the game because of a hip injury. There is something seriously wrong when that happens to a young player of his talents and it’s sad to see.

What needs to be done across the board, is a survey of players who have had their careers prematurely ended by injury.

We need to ask how that was allowed to happen – and, more pertinently, why.

I don’t think enough has been done, but I think we have to take the lead and, if you’re medical team says a man isn’t fit then we must heed their warning.

Barry Dunnion, by the way, is back really enjoying his club football again, freed from the pressure of the inter-county scene and that high intensity, which is great to see.

THERE has been awful confusion surrounding the black cards. There is just no clarity on what is and isn’t a black card and supporters are now watching and wondering what’s going on when a referee blows for a free. You should be able to know right away what the sanction will be, but people have just been left baffled.

The concept behind the black card’s introduction, trying to take cynicism out of the game, is fine – but, at the end of the day, a bit of common sense could go a long way.

Donegal ended the McKenna Cup with just one black card – Rory Kavanagh’s against Tyrone – and it shows that Jim McGuinness was onto something when he said that he and his squad had been doing a lot of work in coaching to have his players play within the paramaters of the new rule.

Hats off to Carrick

COLAISTE na Carraige is one of the smallest Vocational Schools in Donegal – but their record in Gaelic football is astounding.

On Tuesday, Gareth Doherty’s team defeated Carndonagh Community School in the Under 14 final and their seniors are in a county final, too.

They are continuing to produce the goods. They’ve won four out of the last five senior titles and they have really done fantastic work with the likes of Neilly Byrne in coaching teams and Noel Ward and co keeping their fingers on the pulse.

There was always a great Gaelic football tradition in the school and some fantastic players have passed through those corridors. It really is high time their lead was followed by some of the more stellar schools in Donegal. Hats off to the Carrick men, though – their conveyor belt at Vocational Schools football is a credit to them.

EARLIER this week, at the grand age of 77, Mick O’Dwyer announced his retirement from management.

The legendary man from Waterville in County Kerry has decided that enough is enough.

“My days of rolling up the match programme tightly in my hand and heading out to patrol the sidelines are over,” he said.

“I’d be happy to give a bit of advice from time to time if anyone wants it but I won’t be managing again. That’s behind me now.”

In his pomp, he was truly one of the greats, as a player and a manager with the Kingdom. Those years when he went to Kildare and Laois to deliver Leinster titles were magical and there was always an aura around him.

The Gaelic football world will be all the poorer without his involved. An iconic figure, he could go into punditry – it would be great to keep him involved in some capacity.