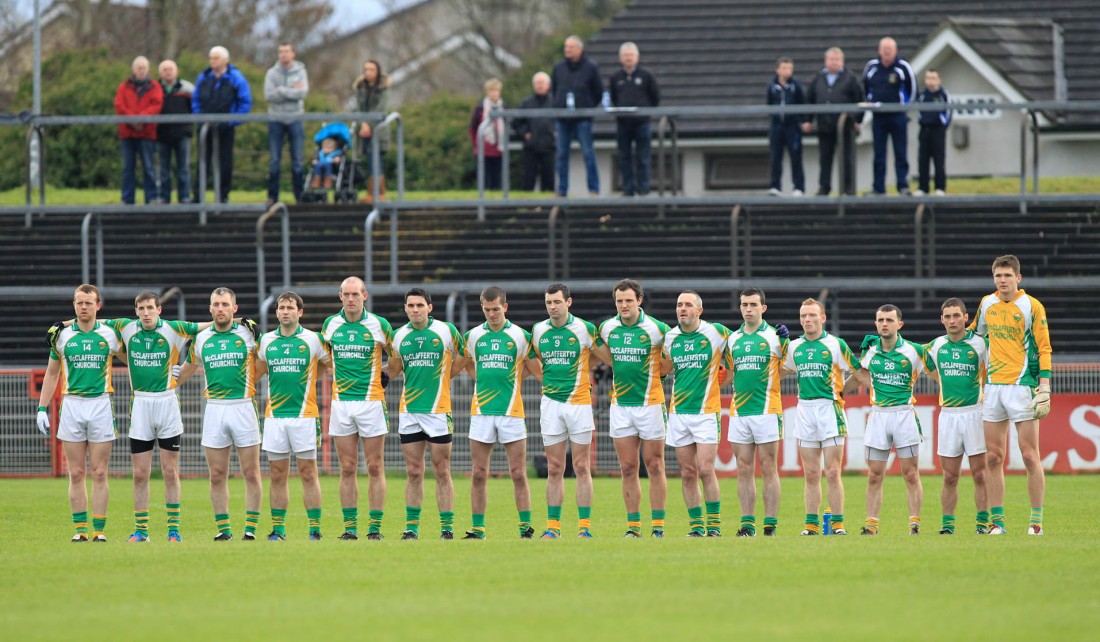 The starting XV for Glenswilly against Ballinderry. Photo: Donna McBride

By Chris McNulty at Healy Park

ULTIMATELY, they can admit that they were beaten by the better side and for that there is no shame.

But the thing that will stick most in Glenswilly throats is that this one was within touching distance – until Ballinderry’s class told in the kicking of six of the game’s final seven scores.

In their first Ulster senior club final, Glenswilly gave it their all and emptied the tank, but the brilliant score-taking of Ballinderry was the key in an absorbing contest at Healy Park. Some of their long-range points were fit for any stage and were instrumental in beating Glenswilly’s packed house at the back.

Glenswilly had enjoyed a dream start when Michael Murphy goaled after only 25 seconds, but with Michael McIver prodding home at the other end it was the boys in blue who had a four-point lead at the break.

From the dressing room emerged a reinvigorated Glenswilly.

Within seven minutes of the second half, Gary McDaid’s team led the way again.

With Murphy and Darren McGinley hitting points, Glenswilly were 2-5 to 1-7 in front, but they just couldn’t find a way in to press on.

It was not so much a failure of their own system, but rather it was the sheer quality of Ballinderry’s that was the difference here.

The Glenswilly shield had withstood quite a bit, but in the second half Ballinderry pressed the button and put on an exhibition of sorts in the final quarter.

Some of their scores were breathtaking.

Conleith Gilligan tied it up right after McGinley had put Glenswilly ahead and Coilin Devlin hit a beauty to put Ballinderry into a lead they would hold for the remainder of the game.

Daniel McKinless was faced with a wall of green, but still managed to pop over and it was a similar story when sub Aaron Devlin got a shot away to open up a three-point lead with ten minutes remaining.

The curtains could have been closed but for the intervention of Philip O’Donnell, the Glenswilly ‘keeper, who raced from his line to deny Conor Nevin what seemed a certain goal in the 51st minute.

A brilliant point from Murphy enriched Glenswilly for a time again, but Ballinderry’s experience became critical.

Gilligan was the architect of a sublime point for Darren Conway, curled in to perfection in near-impossible conditions, seemingly choked in a Glenswilly swarm yet managing to get the leg swung for an inspirational score.

A 45-metre Gilligan free but the tin hat on it to seal a third title for Ballinderry, the 2002 All-Ireland champions who are on the prowl again.

Glenswilly manager Gary McDaid talked before the final of the importance of an early goal, but even he seemed stunned by the speed at which it arrived.

Murphy began at midfield for the throw-in, but just 25 seconds later he was celebrating a goal. A loose pass by Ciaran Bonner seemed to have run away from Murphy, but then Murphy did that thing he has the knack of doing: Making something from nothing and placing his mark on the big stage.

He made a training cone of Dermot McGuckin, darting in on the end-line before a curling left-footed shot soared past Michael Conlan to the net.

A ’45 by Murphy put them four in front, but they were without a score from then until the 21st minute.

Their only other point in the first period came from Caolán Kelly, who slammed over after taking receipt of a majestic cross-field ball by Murphy.

Devlin broke Ballinderry’s duck in the eleventh minute and they were level with Conway, Dermot McGuckin, Devlin (free) and Gilligan (free) all registering.

Disaster struck for Glenswilly in the 26th minute when Ballinderry pounced for a goal that was as opportune as it was clinically finished.

Ryan Bell’s initial effort at the target was blocked by Eamon Ward. The ball ricocheted off the turf perfectly for the in-rushing Michael McIver to steer home and give the Derry champions the lead for the first time.

In the final minute of the half, the deficit went out to four points when Glenswilly should have reeled it in.

The thread was beginning to unravel by now for the Glen men. Ciaran Bonner could have narrowed the margin but after his effort bobbled back off an upright, Ballinderry scorched up the other end and Dermot McGuckin steered over to make it 1-6 to 1-2 as they drew breath following a frenetic half-an-hour.

Glenswilly withdrew John McFadden at half-time after he had treaded thin ice in the moments after McIver’s goal, earning himself a booking; one of five Glenswilly men cautioned in the first half.

The opening to the second half was every bit as pulsating. Two minutes in, Glenswilly landed a second goal.

Kealan McFadden drove at Ballinderry and made inroads. Murphy burst around on the overlap. Murphy powered in before lifting over Conlan for Kelly to slap to the net.

When Murphy and McGinley pointed it was set up for Glenswilly, but Ballinderry’s depth was laid bare when their number eleven appeared as a sub: a certain Enda Muldoon.

There were a couple of instances when Glenswilly could have reaped a little more from what they’d sewn. Like the time in the 43rd minute when Colin Kelly found himself momentarily eye-balling Conlan when he’d got in behind. It was an ever-so-brief encounter, though, as the ball slipped from his clutch and Ballinderry escaped.

The long-ball tactic to Kelly, often the lone frontman, posed difficulty for Ballinderry, but they were able to survive and there must be the lingering thoughts of what might have been had Murphy been the target of those darts.

The regrets are few, though, and Glenswilly will look back on a historic campaign that saw the club’s name in lights for a few dizzy weeks that gripped a parish and drew the rest of the county in on the act.

While James Conway was the Man of the Match, Ballinderry also had influential displays from McKinless and Gilligan.

Ciaran Bonner worked tirelessly for Glenswilly’s cause, forcing several big turnovers, with Darren McGinley emptying the tank and Murphy demonstrating that rare knack again of coming up with the goods at key moments.

That defeat in an Ulster senior club final is a hard pill to swallow is, in itself, a demonstration of the heights to which they’ve risen.